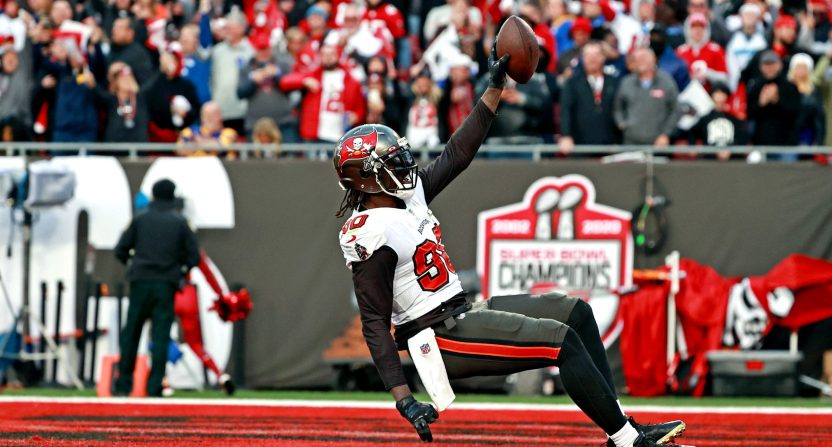 The Baltimore Ravens defense struggled mightily against the Miami Dolphins in Week 2, allowing Dolphins quarterback Tua Tagovailoa to have a career day against them on Sunday.

There were problems in both the secondary and a lack of pass rush for Baltimore this weekend, and they may be looking to bring in a former Pro Bowl defensive end to put more pressure on the quarterback moving forward.

According to NFL insider Jordan Schultz, the Ravens are hosting free agent pass-rusher Jason Pierre-Paul for a visit on Tuesday with hopes that the two sides could come to a deal.

FA DE Jason Pierre-Paul is visiting with #Ravens, per source. He’s in the building meeting with the team.

Pierre-Paul previously met with the organization back in June to discuss a deal, but nothing came of the visit.

There now appears to be a significant need in that area for Baltimore, with the Ravens only getting one sack on Tagovailoa despite 50 pass attempts on Sunday. Many around the Ravens’ locker room appear confident that the two sides will eventually come to a deal in the coming days.

This is the second meeting between Pierre-Paul and the Ravens. The first one was back in June and its purpose was for the Ravens to get to know JPP a bit and have him take a physical. Ravens only have 2 OLBs on their roster. They also have 2 open roster spots. https://t.co/Ux0rhkHqdf

JPP met with the Ravens in June, but they couldn't get a deal done. In the months since, they've lost Vince Biegel, Steven Means, Daelin Hayes and Tyus Bowser to injury/rehab. Jaylon Ferguson died ~10 days after the meeting, too.

The Ravens need some help at outside linebacker. https://t.co/vll8lCATnY

This is the second meeting between Ravens and Jason Pierre-Paul this year. Baltimore is extremely thin at edge rusher. https://t.co/buvPY9S7ph

Jason Pierre-Paul is visiting the Ravens. He visited them in June without signing a deal.

Pierre-Paul last played with the Tampa Bay Buccaneers, where he had an up-and-down run in his four-year stint. He was able to make a Pro Bowl appearance in 2020 with Tampa Bay but saw his role drastically reduce in a 2021 season that was plagued with injuries.

At the very least, he has proven over the years that he is a reliable commodity who can get pressure on the quarterback, something the Ravens desperately need at the moment.