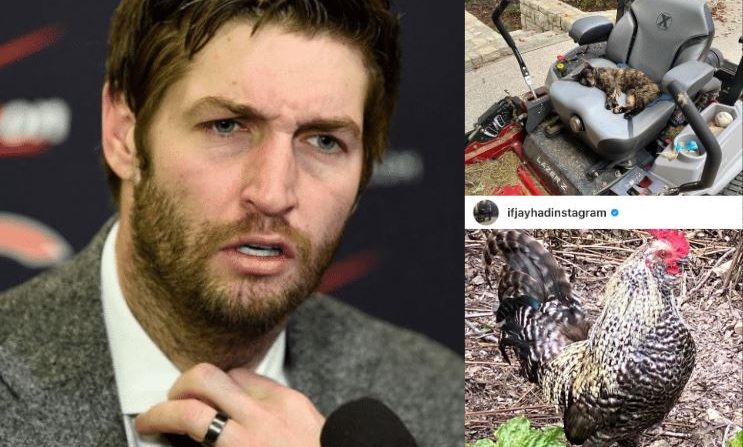 When Jay Cutler and Kristin Cavallari announced the end of their 10-year relationship in matching Instagram posts, I’ll admit I was gutted. Not because I have some weird infatuation with celebrities I’ve never met, nor because I spent a couple of misdirected years covering the couple’s popular reality television show, Very Cavallari. No, the devastation really set in when I realized that the access to Jay’s Oscar-worthy apathy and antics would likely be gone forever. If you’ve watched even one episode, you’ll know that he was brilliant and by far the most entertaining personality. And also, if you’ve watched even one episode, it’s apparent that he didn’t love having the cameras around, so another reality TV gig seemed out of the question, and the loss of Jay screen time registered as yet another kick in the chiclets delivered by 2020.

Thankfully, he didn’t leave us for long. Within a couple of weeks of their mid-quarantine separation announcement, Jay seemed to assume more active control of his Instagram, @ifjayhadinstagram, (previously confirmed to be operated by Kristin) and began to post more regularly. A Mother’s Day post to Kristin, a handful of images of blazing sunsets and the great outdoors, and more recently, his foray into true crime- he took his Instagram followers on a winding journey as he investigated and solved the mystery of who or what was executing the chickens on his Nashville farm.

The saga began just one week ago, when Jay posted his first ever Instagram story to inform us of the tragedy:

The curious case of the chicken serial killer

“OK here’s the deal. First story; it’s a big one. We’ve got a chicken serial killer on the loose. We’ve lost quite a few. Tonight, we’re gonna set up a trail camera. See if it’s a coyote, bobcat, raccoon. Could be anything. I’m not sure. But enough’s enough. These ladies are a little edgy right now, so we’ve gotta figure this out. There is one other possibility. Could be an inside job.  Thelma over there, while she looks nice and sweet, is a savage with loose morals. Thelma. Hey cat. Kitty cat. I hope you don’t show up on camera tonight.” 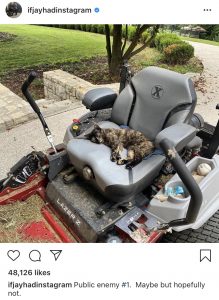 Within a day, however, Jay was able to prove beyond a reasonable doubt that Thelma was not in fact the culprit and issued a public apology: “To the cat: while I’m not sorry you were accused of these vicious acts, I will be the bigger person and admit I was wrong. You are not the suspect we are looking for. Take it as a compliment for your savage ways of life. Carry on Cat.”

Several celebrities weighed-in in the comments, with Carrie Underwood posting, “Phew! I was afraid we were about to have to adopt a new cat.” Retired NFL player Zach Miller added, “Step with caution Thelma, the world is watching.”

Everyone needs to be watching the new Jay Cutler reality show on Instagram stories (ifjayhadinstagram). Today could be the day we learn the true identity of the Nashville Chicken Killer, the cunning villain who framed innocent bystander, Thelma the cat.

I’m thrilled that Thelma was properly cleared before Sarah Koenig had to do a 12-episode podcast on the matter, but with the true suspect still at large, the investigation continued.

It didn’t take long for this saga to grip the nation (I mean, what else is going on?). And soon enough, firearm manufacturer Christensen Arms created a ‘wanted’ poster and promised a prize to the follower who correctly guessed the culprit. Surely, with Big Ammunition backing the cause, the end must be in sight. 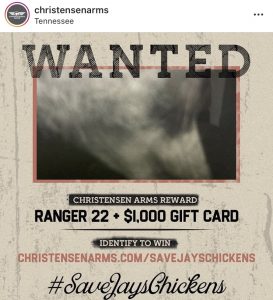 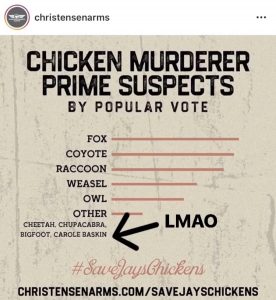 Over the course of several days, Jay tried several tactics to uncover the true identity of this elusive criminal, including night-vision cameras and traps containing raw store-bought chicken, peanut butter and, inexplicably, marshmallows. But day after day, Jay’s frustration and befuddlement only grew more palpable as he shared: “5 cameras. 4 didn’t work after I spent an hour putting in batteries and sd cards. Tested them 3 times. So Cuddleback cameras you are fired. You off the mission. We got 1 photo. 1. Going to regroup for the 2nd time in the last 24 hrs.” 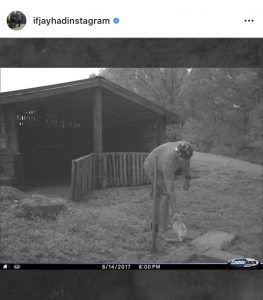 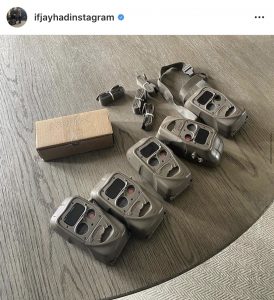 After taking a motorcycle ride to clear his head, garnering some additional trap-laying expertise, and procuring a weapon, Jay returned with renewed vigor, posting “@christensenarms sent some backup. Too bad I’m battling a ghost in the dark. Got some trapping tips today. My odds have at least doubled.”

Josh McCown, former backup quarterback for half of the NFL’s teams, posted a message of encouragement on the latest trap: “Now this thing looks inviting. Well done my friend. The leaves sprinkled on the door are such a difference maker. Tonight’s the night.” 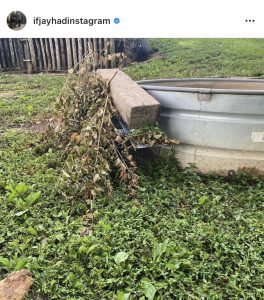 But morning arrived with only a partial picture of something rodent-y, and while paranormal influences were cleared of blame, Jay’s morale was at an all-time low. 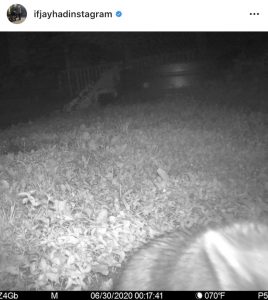 “I’m being taunted, mocked and outwitted by a small animal. Avoided the trap and all the other cameras. Only pic from last night. Only one option left,” he posted.

With seemingly no other choice, Jay camped out in a tree stand with night-vision goggles in the hopes of catching the shifty critter in the act. And, after a week of turmoil, the true identity of the criminal was revealed: a raccoon. 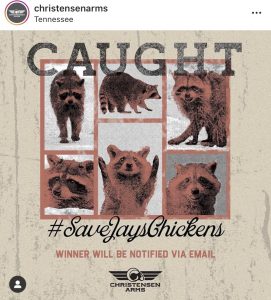 While Jay didn’t exactly specify how the creature met it’s fate, I’m going to pretend that he sent it to a farm upstate.

So there we have it. After one week of unrest, 23 posts on Instagram-proper, and dozens of Instagram stories, the chickens are safe and peace is restored in Nashville once more. 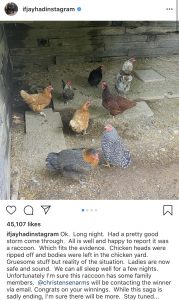 I don’t know what Jay has in store for us next, but I for one am waiting with baited breath for the next instance of fowl play.