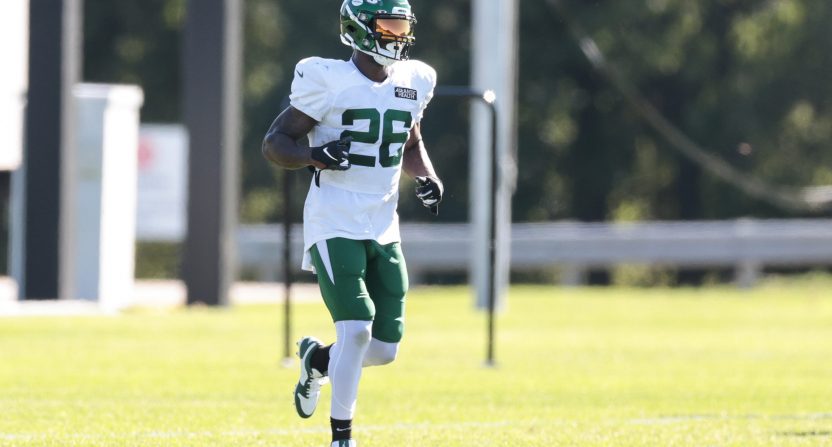 Earlier on Tuesday, it was reported that the 0-5 New York Jets were looking to trade running back Le’Veon Bell. Clearly, the Jets were unable to find any takers, and they released Bell on Tuesday night.

The Jets released a statement from general manager Joe Douglas on the decision.

Le'Veon Bell's final financial and contractual stats with the Jets:
•A shade above $28M over a season and a quarter.
•1,363 yards from scrimmage for 4 TDs.

Additionally, the Jets still owe him $6 million for the rest of the 2020 season.

Le'Veon Bell still has another $6M guaranteed due to him for this season from the Jets and his next deal will offset that pay.

Essentially, teams have a chance to offer Bell a minimum deal and he'll still make a total of $6M for the rest of this season.

The #Jets owe Le’Veon Bell another $6 million in guaranteed base salary this season. His $8 million base salary for 2021 was guaranteed for injury only. Virtually impossible to trade, but they tried. Instead, Bell is now a free agent.

So, Bell can now sign anywhere he wants. And despite his rough numbers over the last two seasons, he’s sure to have plenty of suitors. He’s a two-time All-Pro who was still a highly productive player for the Pittsburgh Steelers in 2017. Additionally, he’s a versatile running back that is a very capable wide receiver. Even with his Jets struggles, he still had 66 receptions for 461 yards in 2019.

It’s also very possible that the dumpster fire that is the Jets sucked the life out of Bell, and he may very well be a much better player than the last two years showed. He’s surely not the player of his prime Steelers years now at 28, but he may still be a solid all-around running back all the same. And if so, he could be a really nice add for a contender.

Additionally, he seems motivated. He tweeted this following the news of his release: “got a lot to prove. i’m ready to go.”

got a lot to prove. i’m ready to go. pic.twitter.com/oDqBM62JfN

It will be very interesting to see where Bell lands, how long it takes for that to happen, and how impactful he is for his new squad. As for the Jets, well, this summarizes everything about their organization these days- and 0-16 seems more possible each day.