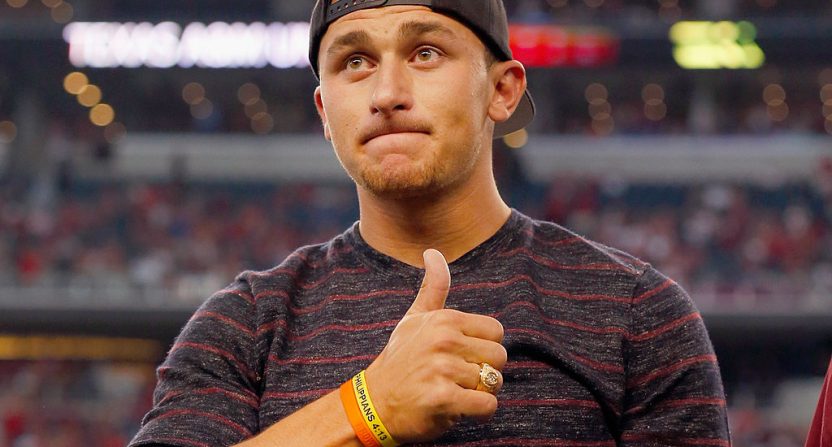 To many people, Johnny Manziel threw away a great NFL career and there’s some truth to that. Even Manziel himself may agree with that assessment. But the 25-year-old Manziel is looking to make a comeback, especially now that he has found out his demons and is working on his problem.

Manziel revealed on Good Morning America that he has been diagnosed with bipolar disorder and depression, and that he had been self-medicating both with alcohol during those years where he was playing football.

In an interview with @GMA, Johnny Manziel said he has been diagnosed as bipolar and is taking medication for it.

His goal is to get back on the football field. pic.twitter.com/pYobONAEWs

Manziel isn’t alone in this. Many people with mental illness who may not have been diagnosed sometimes self-medicate with alcohol or recreational drugs to get through the day. Manziel said that he had been diagnosed bipolar “about a year ago” and has stopped drinking.

In what may have been a different situation a couple years ago, Manziel has taken responsibility for what he has done in his past, including his overindulgence in alcohol, trouble with the law and most importantly, his domestic violence past.

Look, Manziel trying to make a comeback in the NFL is an afterthought at this point. A couple years ago, when it seemed like we were writing something every other day about Manziel’s train wreck of a life, I was convinced that Manziel was going to die. And it seemed like I wasn’t the only person who thought that.

Manziel needs to get his life back together and it seems like he’s making an honest effort to do that. One reason why Manziel never got the help he needed before was because he was so great at football that people ignored the bad stuff and got him off the hook when he did get in trouble because he was a great quarterback. There’s no doubt Texas A&M looked the other way on Manziel’s partying and drinking in college because he won the Heisman and took the Aggies to an 11-2 record in their first season in the SEC. And if he had been able to keep that level of play going in the NFL, the Browns would’ve ignored it too.

If you’re successful at what you do, it’s tougher to get help because no one is willing to be tough on you to convince you that you need help. Whether it was the teams he played for, his entourage of friends who were living off the lifestyle being afraid they would be cut off if they spoke up or local law enforcement and the justice system who gives a slap on the wrist to people like Manziel because football is bigger than Jesus in this country (especially in Texas), that’s when you get into a situation where a person is on pace to kill themselves or someone else.

There’s a reason why Manziel’s father wished jail time for his son. It wasn’t that he hated his son and wanted him to go away, it was the complete opposite. He loves Johnny and wanted him to get help, and if he wasn’t going to realize that after so many people wanted to help him, maybe going to jail and actually losing everything would have been the wake up call he needed.

And it turned out losing his NFL career was that eventual wake up call. Looking back, maybe Manziel getting drafted by the Browns was a silver lining in saving his life. If Manziel hadn’t gone to the Browns, where no QB could turn that mess of a franchise around, he may have been good elsewhere and his downward spiral in addiction would’ve been worse and may have been beyond repair.

So while it’s great for Manziel to work on making an NFL comeback, it’s important to be cognizant of what might happen as a result of said comeback. What if the team he plays for overlooks a relapse because Manziel has them at 11-5 and in the playoffs? What if Manziel’s meds causes him to not play as well and faces a situation of going off the meds and playing better or staying on them and maybe losing his spot on the team? While Manziel has acknowledged his addiction and is facing that head-on, it’s going to be a fight he’ll face for the rest of his life and he might need support around him to maybe tell him things he doesn’t want to hear at that time to keep him on a sober path.

As long as Manziel finds a team who is willing to give him a chance both on-the-field as a player and off-the-field in his sobriety, a comeback in the NFL would be a great redemption story, and one that may not have been predicted a couple years ago. If that team is going to put an emphasis on winning more than personal well-being, he’ll be back where he started.