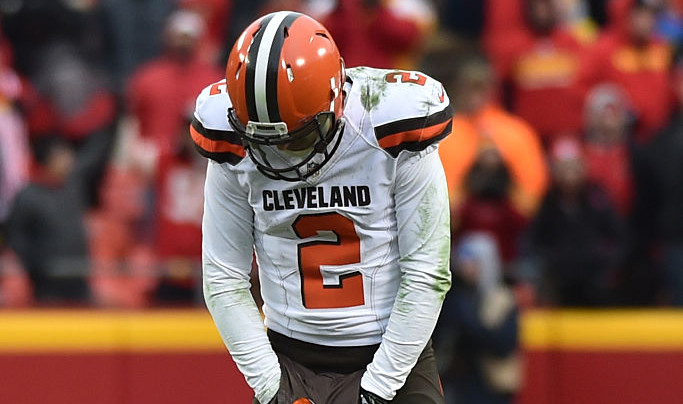 Johnny Manziel is busy making the media rounds as he attempts to reshape his image and move forward with a possible comeback to professional football. The former Browns first-round draft pick has said he has been diagnosed with bipolar disorder, but he hopes others will be able to learn from the mistakes he made that ruined his NFL career in quick order. Among those Manziel hopes learn from his mistakes is Baker Mayfield, a quarterback who has drawn plenty of comparisons to Manziel during his time at Oklahoma.

Like Manziel, Mayfield has gotten into headlines for many of the wrong reasons both on and off the field, but his talent on the field was never doubted. The 2017 Heisman Trophy winner caused stirs with his actions and disrespect for opponents on multiple occasions and made it easy for some to suggest Mayfield is similar to Manziel, but Manziel does not see that to be the case.

“We’re completely different people,” Manziel said as a guest on a recent episode of Pardon My Take. “We’re both from Texas. We both played Texas high school football. But he’s not me, and I’m not him. The way my wires are in my head, and the way that I’m built and my makeup is completely different than Baker.”

“I think he’s going to be a really good player,” Manziel said. “He can try and take something that I did and make it a positive for him.”

Making comparisons between Mayfield and Manziel is easy, but probably a bit lazy. As far as pro potential, Mayfield seems more similar to Russell Wilson of the Seattle Seahawks, as Matt Miller of Bleacher Report highlighted back in October. But that doesn’t mean Manziel’s life lessons should be overlooked by the cocky and confident Mayfield or any player about to head to the NFL. The greatest lessons in life can come from failure, be they your own or somebody else’s. Manziel’s failures and struggles should be watched closely by any soon-to-be-rookie in the NFL.