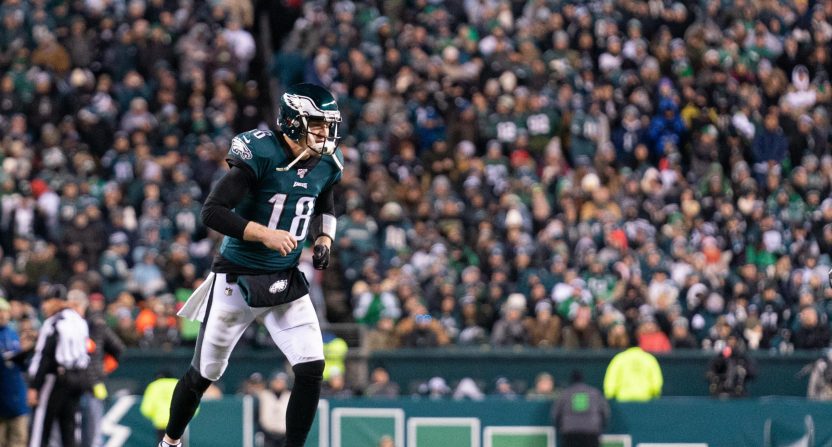 When the Houston Texans fired David Culley last week, that left just one black head coach in the entire NFL. Given that Culley had to be an assistant for almost 30 years to get to the head coaching level only to lose his job after one year seemed to drive home the idea that the deck is stacked against black coaches compared to many white coaches.

All of which is to say that the Houston Texans interviewed Josh McCown, a quarterback who has never coached at the college or NFL level at any point in his career, as a candidate to replace Culley on Thursday.

We completed an interview with Josh McCown for our head coaching position today.

It should be noted that McCown interviewed for the position last year as well and there were rumblings that Culley was always going to be a stopgap on the way to the Texans making McCown their coach. However, it was assumed that McCown would be part of the staff this past season and that never happened.

McCown, who has been playing professionally in the NFL and UFL for the better part of the last two decades, did coach at the high school level, including for Myers Park High School while his sons played. He spent 2020 with the Texans organization but was released following the season.

McCown certainly has plenty of experience as an NFL player but the idea that he would just be handed a head coaching role without any notable coaching experience is a pretty wild leap. Naturally, social media lit up with reactions to the possibility.

This almost never works in baseball. It would be downright insane in football https://t.co/gHpleZTLTx

Josh McCown and Jack Easterby are buds and thisclose. With McCown having no coaching experience Easterby has gotten his close friend 2 head coaching interviews with Texans in 12 months.

So the Texans reportedly interviewed Josh McCown. No coaching experience, but plenty of folks love him

The Texans could conceivably go from firing a minority coaching veteran who waited 40 years for his shot just to go hire a white dude with zero coaching experience….oh boy….

Kids don't need to learn about Critical Race Theory in school because they can see the Texans replace David Culley with Josh McCown to get the gist of it https://t.co/vgzEjKaSBC

To be fair, the Texans have interviewed a lot of qualified people, including former Dolphins head coach Brian Flores, Chargers offensive coordinator Joe Lombardi, FAU special assistant to the head coach Hines Ward, and Eagles defensive coordinator Jonathan Gannon. If they hire do hire McCown, it’s going to be a pretty crazy move that will be heavily criticized. Buckle up.