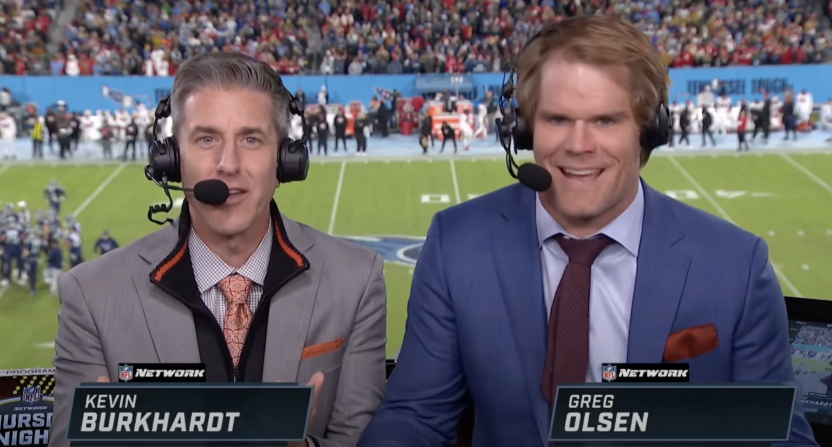 When Joe Buck followed Troy Aikman to ESPN, it left a major gap in Fox’s No. 1 NFL booth. The odds-on favorite to take the lead play-by-play spot was Kevin Burkhardt and it turns out that was a good bet.

According to Andrew Marchand, Burkhardt is about to sign a long-term deal that will elevate him to the No. 1 commentator spot and see him calling two of the next three Super Bowls.

It might have been the most obvious solution but it’s also a solid one. And Fox can make life really easy on themselves and simply elevate booth partner Greg Olsen to the No. 1 analyst role as well in order to maintain the camaraderie and ease with which they communicate. However, Marchand did not that decision hasn’t been made yet and it sounds like they still might be kicking the tires on some big names, having reached out to Tom Brady before he un-retired.

The 48-year-old Burkhardt worked his way up through minor league baseball and local radio stations until he broke out with WFAN, eventually becoming their full-time New York Jets reporter. He joined the Mets broadcast team in 2007 and parlayed that into becoming the play-by-play voice for Dallas Cowboys games on Compass Media Networks between 2011 and 2013. Burkhardt joined Fox in 2013 and began calling games with John Lynch as their No. 4 announcer team, also doing full-in work on the MLB side. He worked his way up the ladder, partnering with Olsen last season as the No. 2 team, which brings him to now.

Buck’s shoes are some big ones to fill but based on the early reactions on social media, it looks like many in the NFL world think Burkhardt will have no problem doing so and making his own mark.

Sincere, hard working and extremely talented. @kevinburkhardt is one the best to ever do it and he deserves this so much!! https://t.co/hlXTOgaV6J

Outstanding news for one of the absolute best in the business. Kevin is a star and a tremendous person who has earned this & will do extraordinarily well in this role! https://t.co/CiXt3lRLN5

This is absolutely incredible. There’s no more deserving person. So happy for @kevinburkhardt. Nobody better. https://t.co/VRjNvqYwIp

To say this is well deserved is an understatement. I first met @kevinburkhardt while he was calling my HS football games back in NJ.

Congratulations to @kevinburkhardt, one of the very best broadcasters in America (on any subject) and one of my favorite all-time teammates. This is richly deserved for an amazing person. https://t.co/L0tYmHaaua

Love when good things happen to good people. Kevin easily one of the nicest human beings I've ever worked with. https://t.co/VvuZqQlx1C

Happy for KB. Such a great dude. Kevin's fantastic as a studio host and as a PxP person. This couldn't happen to a nicer guy. https://t.co/kkRgkloptG