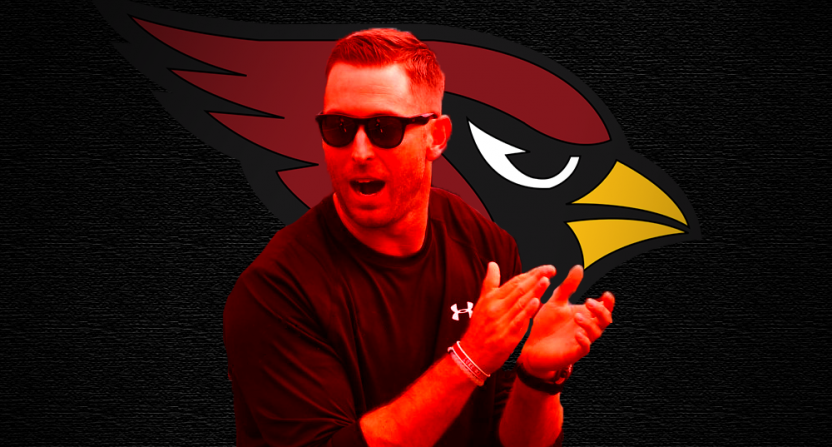 One of the craziest paths to the NFL appears to have passed the final roadblock. Kliff Kingsbury will reportedly be the next head coach of the Arizona Cardinals. According to Peter Schrager of FOX Sports and NFL Network’s Good Morning Football, via Twitter, Kingsbury is putting the finishing touches on a contract with the NFL franchise.

Per sources, Kliff Kingsbury is finalizing a deal to become the Head Coach of the Arizona Cardinals. @nflnetwork @gmfb @NFLonFOX

This is fascinating, because just days ago, Kingsbury was reportedly being blocked by USC Athletics Director Lynn Swann from being able to interview for any open NFL positions, specifically with the Cardinals and New York Jets. Kingsbury had been added to the USC coaching staff as offensive coordinator in December after being removed as head coach at Texas Tech.

So to recap, Kingsbury went from being fired by a middle-of-the-pack Big 12 program to being the next offensive coordinator at USC to being blocked from being able to pursue NFL opportunities to becoming the next head coach of one of the teams he was reportedly blocked from interviewing with previously. It’s been quite a month and a half for Kingsbury.

It was previously reported Kingsbury might consider buying out his contract at USC to re-open a path to being an NFL coach. We’ll have to wait to see if that ended up being the case, although that would seem likely. It still begs the question of why Kingsbury would even bother signing on with the USC coaching staff so quickly after losing his job at Texas Tech if there was any itch to explore NFL opportunities. Perhaps all’s well that ends well in that regard, but will it end well for Kingsbury and the Cardinals? That is absolutely no guarantee.

Was Kingsbury a winner in college football? Simply going off the numbers in the win and loss columns, that is a resounding “No.” Kingsbury was the head coach of Texas Tech from 2013 through the end of the 2018 season, during which time he accumulated a record of 35-40 with a 1-2 record in postseason bowl games. The lone bowl win came in his first season in Lubbock as the head coach. Four of the next five seasons ended with losing records and he never landed the Red Raiders in the AP Top 25 at the end of a season. It wasn’t all bad, however, as Texas Tech put up some good fights in Big 12 play. They just didn’t have enough pieces to keep up the pace to contend for a Big 12 title in a conference dominated by Oklahoma, with other contenders like Texas, West Virginia, TCU, and Baylor rising and falling. Texas Tech was never in that mix under Kingsburg, despite returning to the form of Texas Tech football that was well-received under former Texas Tech head coach Mike Leach.

So, why would an NFL team be interested in Kingsbury anyway? How do you sell hiring a college coach with a losing record? For the Cardinals, it is all about the scheme and the new way of winning in the NFL. Sitting in the same division as the Los Angeles Rams, who have thrived under young head coach Sean McVay and an offense that has blossomed with a franchise quarterback in Jared Goff over the past couple of seasons, the Cardinals are hoping to mimic that success with their own flashy, offensive-minded young coach and their own franchise quarterback. It’s not the craziest of ideas, but it smells like Arizona is reaching out expecting to be able to have the same type of success as the Rams. In order for that to happen, the Cardinals will have to build through the draft and put together a roster that plugs holes across the depth chart.

This will be Kingsbury’s first time in the NFL as a coach, although he did float around the league for a couple of years as a player. The game is moving in an offensive direction that favors offensive minds like Kingsbury’s, and the rise of Patrick Mahomes as an NFL MVP candidate this season with the Kansas City Chiefs certainly helps the case for Kingsbury, who coached Mahomes at Texas Tech. Baker Mayfield putting together a season worthy of offensive rookie of the year credentials may be another suggestion that someone from the Big 12 can thrive in the NFL moving forward. It’s no secret that NFL teams will copy the style and techniques that are proven to be successful in the NFL, and the Cardinals have to find a way to beat the Rams in the NFC West. We’ll see if this works out for them.

No matter what happens for Kingsbury and the Cardinals, we may never see a coaching trajectory quite like this again.