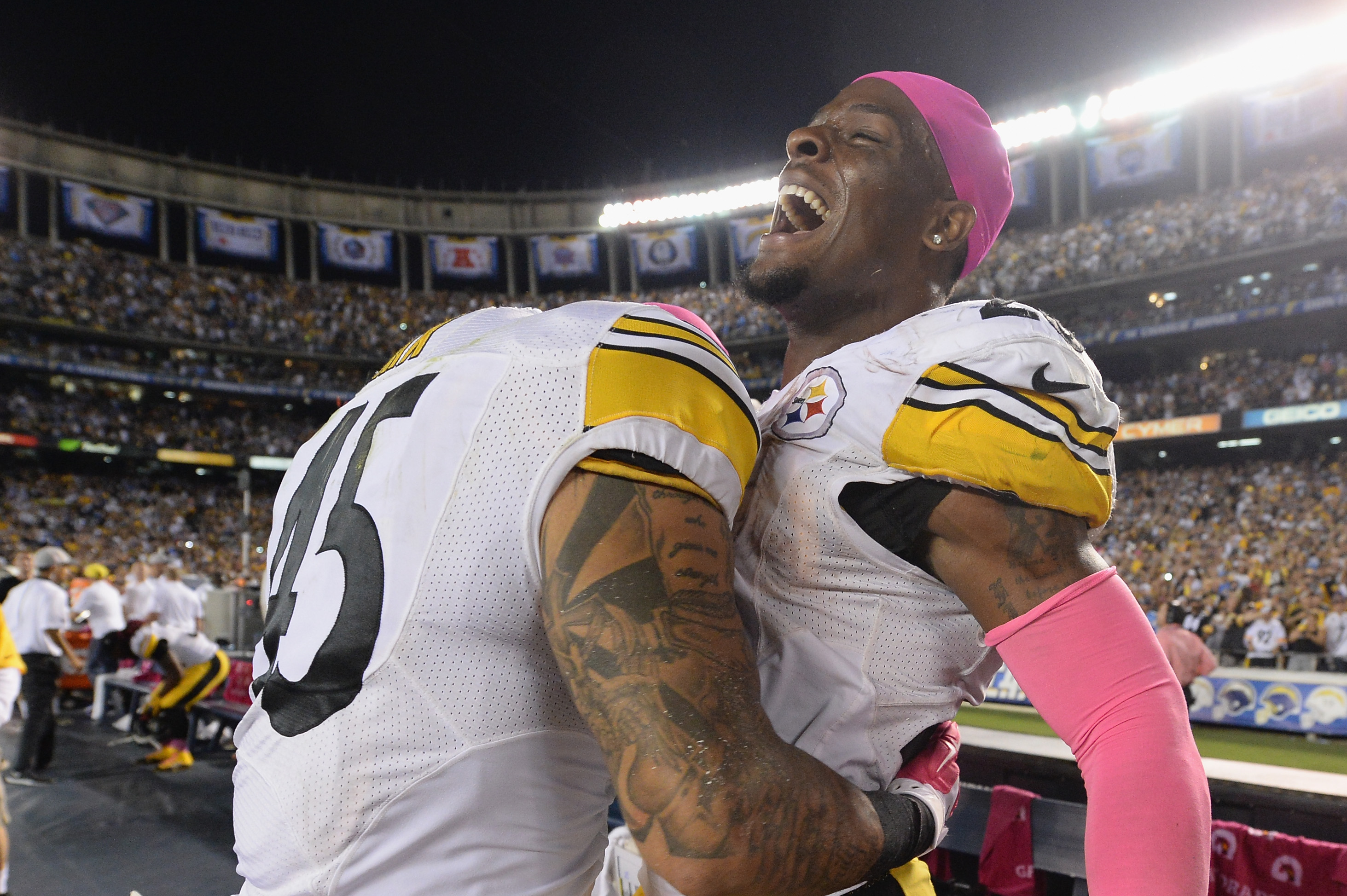 Pittsburgh Steelers running back Le’Veon Bell has had some extra time on his hands during the offseason while he continues rehabilitation on his right knee, which was surgically repaired in November after he suffered a torn MCL and PCL in a late-season game against the Cincinnati Bengals that ended his 2015 campaign.

With that time, he has taken up an avocation: Hip hop artist. His first mixtape, released under the name “Juice” dropped in March. A seperate song, “Focus,” came out recently and it offers a brief glimpse at something else on Bell’s mind: Money.

The line getting the most attention relates to Bell’s contract status. In the song, Bell raps that “I’m at the top and if not I’m the closest/Ima need 15 a year and they know this.”

At the top? No question; even though Bell played in only six games last season (he served a two-game suspension to start the year), he was still named Pro Football Focus’ top running back in 2015. But that 15 a year—as in, $15 million per year—may be something Bell claims he needs, but the matter of the Steelers actually giving him that is another thing altogether.

Paying a running back isn’t what it used to be. The position has been devalued for myriad reasons, essentially boiling down to the reality that backs are becoming more and more expendable in today’s NFL. The passing game is held at a premium, driving down the market for running backs, who are more injury prone given the nature of their position. Also, talented backs can be found in practically any round of the draft or even via undrafted players, making the pipeline plentiful and less expensive.

Adrian Peterson-level contracts are now an exception and not the rule: While Peterson has a $12 million cap hit (that rises to $18 million in 2017) and is working off of a three-year, $42 million contract, the next-highest ranked running back behind Bell according to PFF’s metrics is Tampa Bay’s Doug Martin, who just signed a five-year, $35.75 million contract in March that averages out to just over $7 million per year.

The market has changed, but that doesn’t alter the fact that Bell is certainly a premiere player at his position. In three seasons, Bell has amassed 2,777 yards on 647 carries, averaging 79.3 yards per game. He’s scored 19 rushing touchdowns and has been responsible for 148 first downs as a runner. He’s also an excellent receiver, catching 152 of the 197 passes thrown his way, for 1,389 yards, three scores, and another 58 first downs.

In 2014, he was second in the league in rushing yards with 1,361, while also adding another 854 yards as a receiver. He was set to have a massive 2015 season before the injury, with an average of nearly 93 rushing yards per game and catching all but two of the 26 passes Ben Roethlisberger threw to him. Add into it his ever-improving ability to pass-protect and there’s little question that Bell is the best all-around back in the game today.

How that translates to his impending payday, though, is more complicated. While Bell may see Peterson’s contract as a benchmark to be surpassed, the salary cap has to be considered, as well as the market value for running backs. The money could certainly be available to pay Bell a considerable amount, depending on what the Steelers do with other impending free agents such as linebacker Lawrence Timmons, guard David DeCastro and receiver Markus Wheaton.

DeCastro seems, at present, the only 2017 free agent likely to get a new deal in the offseason which means there will be funds in place to give Bell a Peterson-esque per-year average, especially in the event of the per-team cap also increasing another $10 million in 2017. Plus, Bell will only be 25-years-old next season, meaning from an age standpoint he has more than enough time to make good on a pricey new contract. But the injury puts a wrench in the works, a wrench that almost guarantees Bell will have to wait until after the 2016 season wraps to get a deal done with the Steelers.

That deal will doubtlessly come from Pittsburgh, it should be noted. There is little chance that the Steelers will let Bell test the waters of free agency given how important he is to the team’s overall offense, an offense that is perhaps the most explosive in the NFL.

According to ESPN’s Jeremy Fowler, Bell is readying himself to be 100 percent healthy, “able to cut and run freely” when training camp commences in late July.

The Steelers, meanwhile, will be practicing “cautious optimism,” likely easing Bell into full camp practices and using him sparingly in the preseason, perhaps only in the first-team “dress rehearsal” that is typically the third preseason game. Depending on Bell’s health and the Steelers’ willingness to gamble, Bell could be held on a pitch count of sorts to open the year, something the team would be more than comfortable with given DeAngelo Williams’ handling of the starter’s workload last year in place of Bell. It’s only once Bell is a full go in a regular season that we will know if he has regained his previous form and thereby worthy of the league-leading contract he is seeking.

The concept of league-leading running back contracts, though, could shift significantly in 2017. Peterson’s $18 million cap hit next year carries with it no dead money, so it is not out of the question that the Vikings could release him or Peterson could retire at age 32, wiping that money off the board. That would leave the Buffalo Bills’ LeSean McCoy with the highest average per-year salary among running backs, at just over $8 million.

While Bell’s camp might want to invoke the Peterson payout as a benchmark for his new deal, the Steelers could easily counter by saying that’s in the past, not recognizing it as a jumping-off point for negotiations. Alternatively, though, Bell could argue that he is as critical to Pittsburgh’s offense as Peterson has been for Minnesota’s, thus warranting him being paid above and beyond current market rate. After all, Peterson’s deal was an outlier to begin with; therefore, couldn’t Bell be the new exception to the rule?

The popular perception is that the Steelers are stingy, but that’s not entirely true. It’s more accurate to say that the Steelers only pay big when and where it is worth it. It’s why Timmons is the third-highest paid inside linebacker. It’s why Roethlisberger’s per-year average is in the top five among quarterbacks. It’s why center Maurkice Pouncey has a top-four average.

If Bell is that important to the offense working as it does — and he is — then the Steelers will have no issues with finding the money to pay him. But with the market shifting so significantly beyond what Peterson is being paid, Bell may have to get comfortable being paid half of what he believes he’s worth (which would be $7 million more than he’s making in 2016).

Alternatively, though, Bell could also become the new Peterson, the new high watermark, the exception to the new rules of paying running backs in today’s NFL.