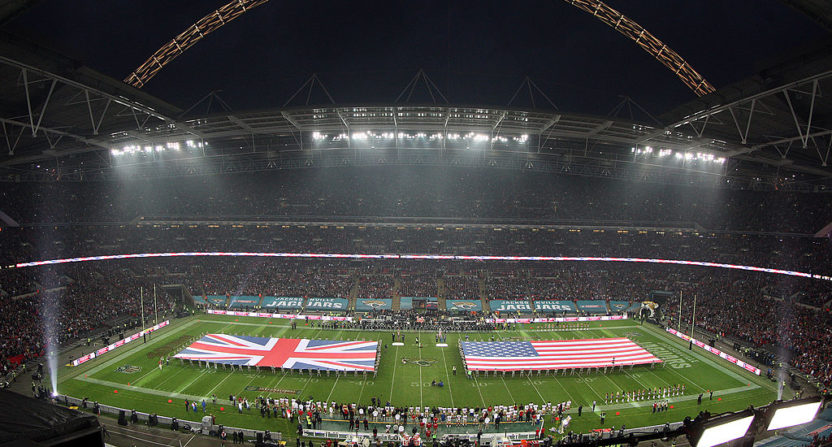 The NFL is celebrating the 10th year of playing regular-season games abroad, as the Jacksonville Jaguars and Baltimore Ravens take the field in Wembley Stadium on Sunday. The game will be the first of four NFL games played in London this season, which will continue to see the league try to convince nearly everybody that London will have a team of its own some time in the coming years.

According to one NFL representative, London will be ready to have a team call the city home by 2022, the previous target date to have an NFL franchise full-time in London.

“We’ve proven clearly that the level of support is here from a fan perspective, a stadium and stadium ownership perspective and from a city and government perspective,” NFL international executive president Mark Waller said this week, according to Albert Breer of SI.com. “We’ll get a lot of support if and when we need it.”

The NFL has taken the stance that the NFL in London can work, as evidenced by the success seen with their series of games in the city. The product may not always be the best representation of NFL football, but the league has clearly been satisfied with the reception it receives every time it visits London. Simply put, if the NFL saw games in London as a failure, it would have abandoned the effort by now because it would not have been worth the investment by the league and the franchises that have had to make the trips across the Atlantic Ocean.

The biggest hurdle to putting a team in London at this point may be having an owner willing to make the move. There are complications with playing a full regular season with a franchise in London, and if the league is going to make it a possibility, it must have an owner committed to making the NFL in London thrive for the long haul.

“If you think about LA, there were years and years where we weren’t in LA, and then an owner decided to make a move and start building a stadium,” Waller explained, via SI. “So our job is to make sure, for London, that if and when an owner feels it’s the right move to make, we’re ready for it. And that’s what we’ve put in place—great fan base, stadium options, and a real focus on feasibility and logistics.”

Waller believes London could still welcome a full-time franchise by 2022, and he has some reasons for thinking 2022 would be the ideal time to bring a team to the United Kingdom. The Collective Bargaining Agreement expiring in March 2021 is one of those reasons.

“And that aligns well from a CBA and union standpoint—that would need to be part of a union agreement. Not to say we couldn’t bargain it separately, but obviously if we’re doing it around that time, that would make sense. And from a media/broadcast standpoint, we’d need to think it through. It feels to me like all the indicators are there, showing that’s still a realistic timeframe.”

The NFL really wants to make football in London a thing. That might be easier said than done.