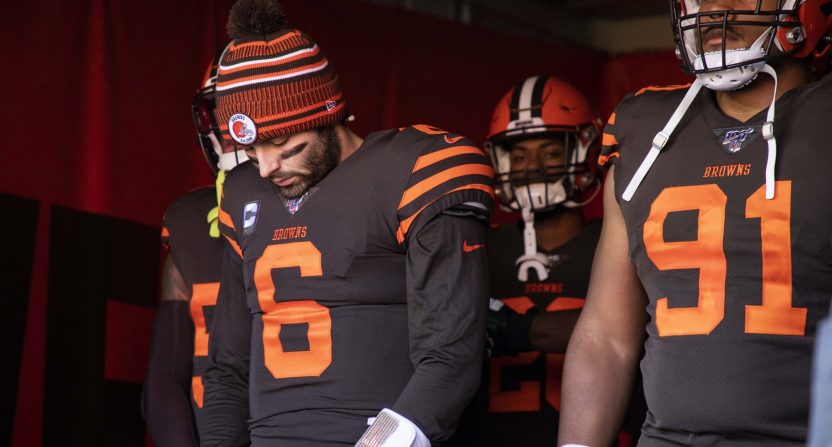 Making preseason predictions is basically a crapshoot. Sure you can make some decent presumptions, but so much of it is guesswork based on the assumptions that others have made mixed with media hype. That’s basically how we ended up coming into the 2019 NFL season convinced the Browns were, in fact, back.

This Week's Cover: Welcome to Cleveland, where @obj, @God_Son80 and the @Browns are true contenders https://t.co/IU0vPmP2HG pic.twitter.com/pTl8R8xFxI

That, it turns out, was not true in the slightest. The Browns stumbled out of the gates and never got anything going. They were done-in early and often by red-zone woes, Baker Mayfield’s issues, Nick Chubb’s inconsistency, Odell Beckham’s failure to meet expectations, Freddie Kitchens’ curious decision-making and so many other things. Their disappointing season culminated perfectly, with a loss to the one-win Cincinnati Bengals. Add that to their loss to the three-win Cardinals and it’s no wonder Kitchens might be on his way out after the season.

With all of that said, it goes without saying that everyone, and we mean everyone, got it wrong about the Browns. We thought it’d be funny and cathartic to look back at the preseason and see just how wrong we all were…

We didn’t do game predictions but we did predict that Baker Mayfield would make The Leap this year.

Mayfield was one of the best quarterbacks in the NFL down the stretch in 2018 and is likely to be an MVP candidate in his sophomore season with a stacked Cleveland Browns team.

The Browns edged out the Steelers to top the AFC North amongst NFL.com’s experts, receiving 13 first-place votes to Pittsburgh’s 12 (Baltimore also got 4). In explaining why he picked the Browns to win the division, David Carr noted “there is so much talent on John Dorsey’s roster…I anticipate this gifted group will handle it well and get back to the top of the division for the first time in 30 years.” About that…

Forty-five writers and editors from ESPN’s NFL Nation weight in on these predictions and in this case the Browns are nowhere to be seen on the final list of playoff teams. However, they did project an 8.8 win total for the Browns, which was higher than every other AFC North team. Go figure.

ESPN also simulated the entire NFL schedule 20,000 times using the ESPN Football Power Index, which ended up predicting a 10-6 record and division crown for the Browns. So even the stats were fooled.

Andy Benoit at SI had the Browns at 11-5 atop the AFC North. They also predicted the 3-seed Browns would lose in the first round of the AFC Playoffs to the 6-seed, so he at least had a sense this turnaround was far from over, noting “the Browns are sexy but inexperienced.”

Five of the six experts over there had the Browns making the playoffs without predicting an AFC North crown. Only one person had the Browns advancing past the first round of the playoffs, backing the idea that the Browns were supposed to be “back” but not all the way.

John Breech predicted that the Browns would go 9-7 and make the playoffs. He also added this careful-what-you-wish-for sentiment in his write-up.

“Cleveland has one of the most talented teams in the NFL this year and as long as Freddie Kitchens doesn’t crash the Browns hype-train, I expect this team to live up to expectations. I’m also predicting this because I feel sorry for Browns fans and I’m not sure how much more pain they can take…”

Meanwhile, one Jared Dubin’s bold predictions for the season ahead was that the Browns would easily make the playoffs.

In the AFC, it shouldn’t take more than nine wins to get into the playoffs, and with the Browns having won seven (plus a tie) last season and adding a whole bunch of talent, that total seems extremely doable for them.

Pretty much right on the first part, not so much on the other.

Team Simmons was pretty much all-in on the Browns before the season. Five of their six predictors had the Browns in the playoffs, three of which had them winning the AFC North. At least no one said they’d go to the Super Bowl.

Six of their seven experts had the Browns in the playoffs while three put them atop the AFC North. In a look back at the predictions, Nany Armour says what most of us were already thinking.

I got suckered by Baker Mayfield’s improvement at the end of last season and figured he’d build on it – especially with the addition of Odell Beckham Jr. Instead, the Browns are still the Browns, losers for a 12th consecutive season.

The SN staff not only picked the Browns to finish 11-5 but also to win the AFC North and make good on the hype. Bill Bender noted that “general manager John Dorsey was aggressive again this offseason, and the trade to land Beckham could be an iconic moment in franchise history if the Browns win the AFC North this season.” Perhaps not so iconic after all.

The SBN staff didn’t break down division winners and records but they did make predictions for MVP and one such pick was for Browns’ quarterback Baker Mayfield. It sounded good in theory.

Screw it, let’s go all-in on the hype train. Mayfield threw 27 touchdowns last year, setting a new NFL rookie record despite not starting until Week 4. Now he’s got another year’s worth of development and the addition of Odell Beckham Jr. working in his favor. Expect a ton of touchdowns.

We shall go into 2020 expecting those touchdowns yet.