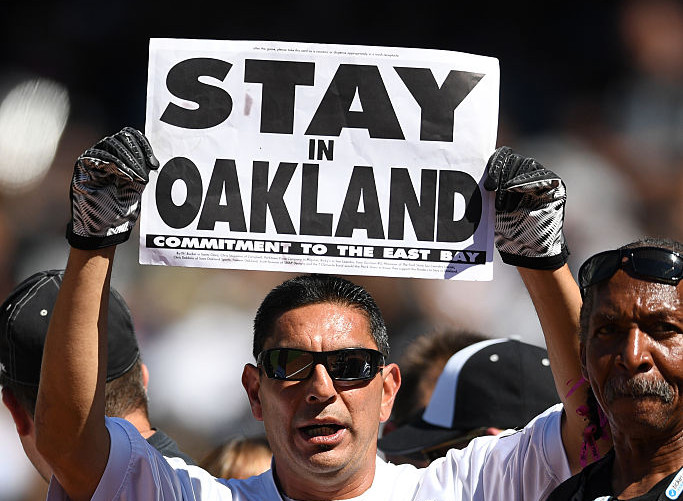 Raiders owner Mark Davis went all in Wednesday on moving his franchise to Las Vegas, according to an ESPN report. With Oakland failing to “put anything together,” according to Davis, he now plans to file papers in January and go ahead with the move.

“Mark Davis said that he was committed to Las Vegas 100 percent, and that there were several market studies being done by the Raiders,” said one source quoted in the ESPN article.

On Monday, Nevada Gov. Brian Sandoval signed a bill to raise taxes to build an NFL stadium in Las Vegas. Davis was there with Sandoval when the bill was signed.

Davis tried to move the Raiders to Los Angeles for the 2016 season but the Rams won that relocation battle. The NFL still must approve Davis’ decision to relocate the Raiders to Vegas before the change becomes official, something that is hardly a guarantee.

“I don’t know what there is to say other than, ‘Congrats, Raiders on getting the largest public subsidy ever and cleaning up our L.A. [mess],” another source familiar with the Raiders’ presentation told ESPN. “They’ve busted their ass to get something done. I respect that. … Once you’ve stepped up and produced something, you deserve better.”

Although NFL Commissioner Roger Goodell said the league will conduct another market study in Oakland, he acknowledged that there does not appear to be an alternative that would keep the franchise in the Bay Area.

Even if Davis brings the Raiders to Sin City, they would not play there until 2019 at the earliest. I’m sure the Raiders fans would be perfectly fine cheering for a lame duck team during the 2017 and 2018 seasons.