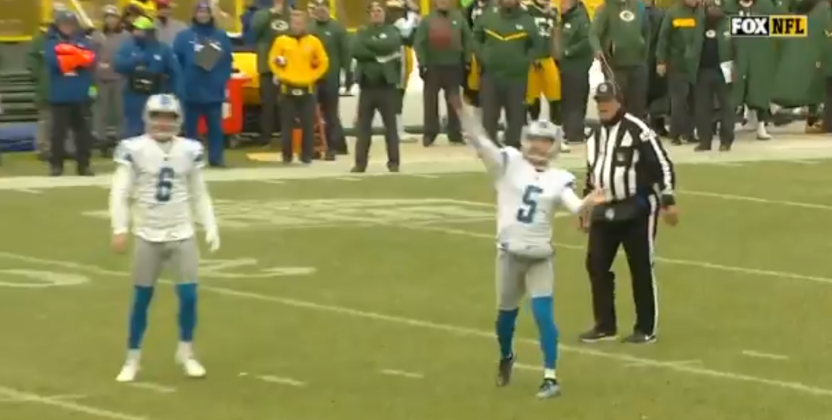 Former Indianapolis Colts’ punter and current media personality Pat McAfee is serving as an analyst on Sunday’s NFL on Fox broadcast of the Detroit Lions-Green Bay Packers game, and he got particularly excited when a big special teams moment happened. With the Lions up 7-0 and facing fourth down and three at the Packers’ eight-yard line, kicker Matt Prater came on for what looked like a short field goal attempt. But it was actually a fake, with Prater throwing a pass to Levine Toilolo, and it turned into a touchdown. And McAfee had lots to say about that on the broadcast (alongside play-by-play announcer Justin Kutcher);

.@PatMcAfeeShow calling a kicker TD pass is everything we've ever wanted 🙌@MattPrater_5 pic.twitter.com/GEsh58X58u

“Oh! Touchdown! TOUCHDOWN! Matt Prater has the NFL’s longest field goal. He’s a man who’s a legend. He’s kicked long balls, he’s kicked game-winners, and here in Lambeau Field in December, he gives the cadence with the leg lift like Peyton Manning, no laces, and delivers a dime into the corner of the end zone for a 13-, about to be 14-nothing lead in Green Bay, Wisconsin! What a beautiful moment for the man! Adjusts himself, calculates it, nice short step, like Peyton Manning says, on the leadoff, and delivers a DIME in the corner of the end zone! That was magical!”

This is McAfee’s first NFL game from the broadcast booth, but he previously called Texas Tech-Baylor (also for Fox) last month, and recently signed a contract with WWE (involving NXT Takeover events and digital content). He’s also done plenty of radio and digital content, first with Barstool Sports and since on his own with his podcast and Heartland Radio shows since leaving Barstool in August, so he’s no stranger to talking on air. And he got the perfect moment for that Sunday thanks to this play by Prater and the Lions.