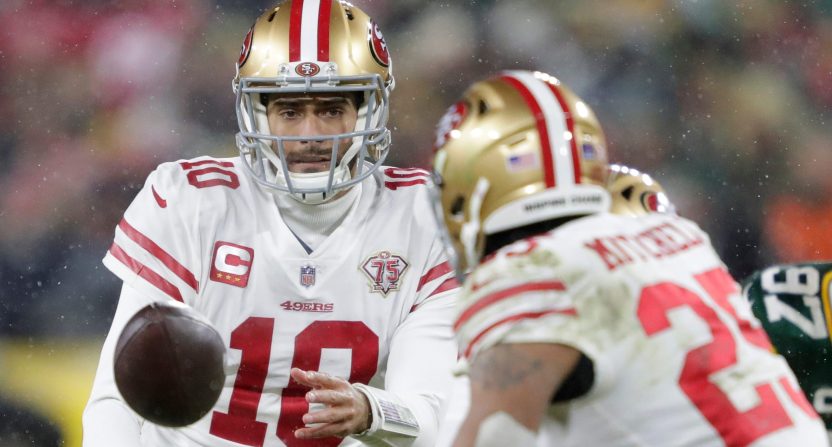 Opinions about San Francisco 49ers quarterback Jimmy Garoppolo are pretty big news these days. As the 30-year-old quarterback leads the Niners to the NFC Championship Game for the second time in three seasons, there are plenty of people debating whether or not San Francisco is succeeding because of him or in spite of him and it’s leading to some very heated exchanges.

Throwing his own opinion into the mix is former NFL quarterback Michael Vick, who was asked what he thinks of the job Jimmy G is doing during his visit to The Pat McAfee Show on Thursday.

"Jimmy G is super confident & believes in himself.. at the end of the day he's winning games & he's a leader" ~@MichaelVick#PatMcAfeeShowLIVE #FTTB pic.twitter.com/hTGKA7eqZI

“I see a guy who is super-confident,” said Vick. “Who believes in himself when the whole world is barreling down on him. He puts himself in a position where he thrives and he excels on just his personal motivation. You look at his win-loss record, it’s way above .500. He always make the right play. Sometimes he’ll make a play that’s goofy but who doesn’t do that?

“At the end of the day, when you’re looking at Jimmy G., he’s winning games and he’s a leader. And it seems like his teammates look to as a guy who got all the answers. When the clock is ticking, who do you want the ball in the hands of? It seems like it’s Jimmy G as of right now. He’s proven that time and time again.

I think consistency is the mark of a great quarterback and always will be. And Jimmy G is pretty consistent.”

Garoppolo threw for 3,810 yards, 20 touchdowns, and 12 interceptions this season. There are certainly better statistical performers out there, but the Niners were also 9-6 with Jimmy under center and find themselves one game away from the Super Bowl, which is more than the Packers, Buccaneers, and Bills can say. There are certainly plenty of detractors out there about Jimmy G and whether or not San Francisco would be better off with another quarterback, but you can’t argue that the team isn’t right where they want to be.

Garoppolo is expected to play despite a thumb injury and if he’s able to lead the Niners to a win over the favored Los Angeles Rams, there’s going to be a lot more discussion about Jimmy G and his status among the NFL quarterbacks.