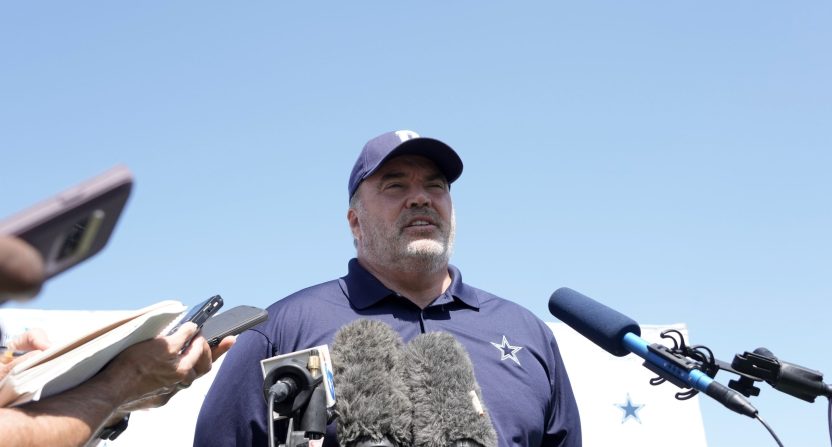 The Dallas Cowboys’ 2022 season got turned upside down last Sunday when quarterback Dak Prescott left the game with a thumb injury that would require surgery. As he’ll miss at least four weeks, but possibly as much as eight weeks, backup Cooper Rush is getting the call and head coach Mike McCarthy tried to put some positive spin on the situation during Wednesday’s press conference.

As far as how much he trusts Rush, McCarthy said the quarterback is “coach smart” and “has a great disposition for a No. 2.” But he added that there’s a need to be aggressive on offense.

#Cowboys' Mike McCarthy says QB Cooper #Rush is "coach smart" and "has a great disposition for a No. 2."

#Cowboys HC Mike McCarthy says QB Cooper Rush has great disposition for #2 but needs to get in there run the offense, they will be aggressive and need to open some things up.

Meanwhile, Prescott will not be moved to injured reserve despite his injury and it sounds like his surgery went well enough that everyone in the franchise is happy with where the timeline goes from here.

“Everyone feels good about the surgery that Dak went through from the medical perspective,” McCarthy said, via ESPN’s Todd Archer. “From my perspective, he had surgery. These next 7-10 days he’s in a healing stage. Let’s get over that hurdle first.”

Cowboys coach Mike McCarthy didn't completely rule out pursuing a veteran QB from the outside, but not this week. He wants to give injured QB Dak Prescott "7-10 days" to heal from his thumb surgery. "Then we'll have a clear idea," he said.

Until then, it's Cooper Rush's show.

We’ll see how well Rush can fill that starter role when the Cowboys host the Bengals on Sunday.