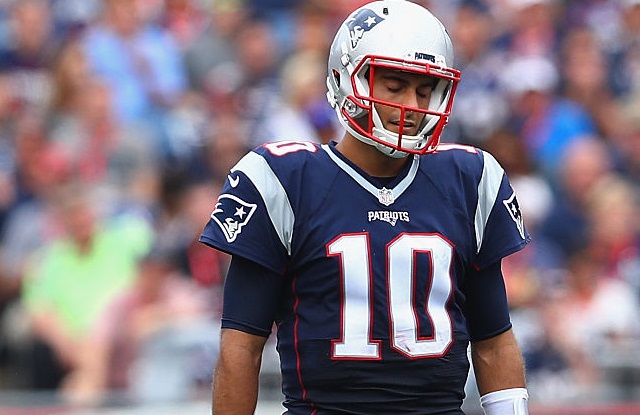 For the first six quarters of the season, the New England Patriots were laughing in the face of Roger Goodell, flying high with backup quarterback Jimmy Garoppolo at the helm. The Patriots’ project player took the league by storm with a road win against the Arizona Cardinals in Week 1 before lighting up the scoreboard in the first half against the Miami Dolphins.

Garoppolo had been playing so well that the Patriots may not have missed Tom Brady during his four-game suspension, but all of that momentum came to a crashing halt late in the second quarter on Sunday. Kiko Alonso’s hit on Garoppolo, which resulted in a sprained AC joint in the quarterback’s right shoulder, put an abrupt end to the hype train out of New England as he will likely miss the final two games of Brady’s Deflategate suspension.

There is some hope Garoppolo could play in Week 4, but it looks like head coach Bill Belichick will be without a dependable quarterback to run the offense, left with third-stringer Jacoby Brissett and perhaps any veteran the team can sign off the waiver wire. Not adding a third quarterback in case of emergency during Brady’s suspension has suddenly presented a tough challenge for the Patriots.

New England now faces a worst-case scenario for the final two weeks of the Deflategate fallout and have few potential answers to what is a very real problem for Belichick and the offensive coaching staff. No experienced quarterback for two weeks and two important games on the schedule prior to Brady’s return puts the Patriots at risk for a stumble.

The biggest decision for Belichick and the Patriots will be if they even try to bring in an emergency replacement at quarterback at all. Three days to prepare for their Thursday Night Football clash with the Houston Texans in a big early-season AFC battle further complicates things for the Patriots, making it very difficult to create a new gameplan with such a short turnaround.

The most likely scenario for the Patriots will be another start for rookie Jacoby Brissett, who struggled against the Dolphins in the second half. New England nearly blew a 24-3 lead after the rookie came into action to replace Garoppolo, a performance that will worry Belichick. Can Brissett fill in capably enough for the Patriots to have a chance against the Texans?

However, Brissett might just be the only option for the Patriots with very little time to find an upgrade. Names like Jimmy Clausen, Josh Freeman and Matt Flynn might be waiting for a phone call, but they would have to learn the playbook and gameplan in just three days. That presents a tall task for the Patriots coaching staff, one that might not be worth the trouble if they can roll the dice with Brissett and get a similar result.

Brissett does have a full training camp worth of experience after New England drafted him in the third round. His performance earned the support of Belichick despite the team’s second-half collapse. The rookie finished with completing 6-of-9 passes for 92 yards and no turnovers in the Patriots’ 31-24 win.

Even with Brissett’s reps, it is hard to have much faith in the Patriots’ ability to beat the Texans on Thursday. Especially after the offense struggled to put points on the board with Brissett under center. Three days will give the Patriots coaching staff a better chance of building a gameplan around him, but it is hard to see things improving enough for the rookie to lead the team to a win over the Texans on Thursday.

The best-case scenario for the Patriots is giving Brissett another game to develop and to hope for an improved performance in Week 4 against the Buffalo Bills where the long practice week should help things. If the Pats can upset the Texans, it will be another great escape from a Deflategate fallout for Belichick. But as of right now, the AFC’s most consistent franchise is in a mini-period of crisis.

With the chance of a collapse under Brissett, the New York Jets will be watching a wounded Patriots offense, hoping for a slide back down to .500. Any loss under Brissett gives hope to the rest of the AFC East, unless the Patriots can pull some magic with their third-round pick.

Right now, the Patriots are a wounded team for the next two weeks without Brady and Garoppolo. There is a chance for an early-season stumble from a team that usually escapes adversity season after season on the way to success. Down to their third quarterback, the rest of the AFC will be hoping the Texans and Bills can pounce on a Patriots team with a chaotic situation that is a rare problem for Bill Belichick.

Nobody knows what will happen now that the Patriots are on QB No. 3 for the next two weeks, which is going to make the end of Tom Brady’s suspension even more compelling. But until then, Jacoby Brissett has the pressure of keeping the offense afloat and his team on top of the AFC East with just nine NFL passes to his name. How he handles the spotlight could define the state of the Patriots once Brady makes his return and rescues Belichick from a crisis situation.