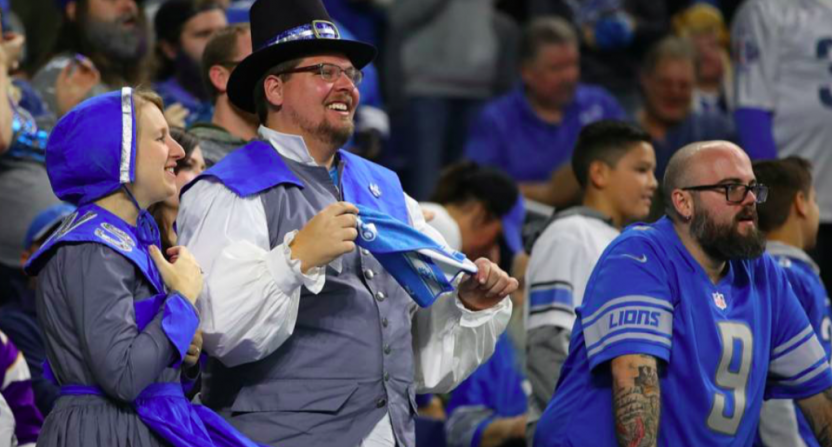 Thanksgiving and the NFL, one of the great annual traditions so long as you can deal with having to watch a Detroit Lions football game. The good news is that Joey Harrington isn’t here anymore to ruin your Turkey Day. However, you’ll still see plenty of familiar faces when you tune in. You’ll see the Lions. You’ll see the Dallas Cowboys. You’ll see all your favorite NFL analysts and TV hosts. And you’ll be sure to see some very specific types of football fans in the crowd.

We’re not gonna break out a Thanksgiving NFL Fan Bingo card or anything, but we’re pretty sure you can count on seeing these eight types of fans today.

Buffalo Bills fans are out of control: The #BillsMafia roasted a guy dressed in a turkey costume for… https://t.co/BZLOiKqpRN #nfl pic.twitter.com/WQgoO6iUkV

If we know anything, there’s going to be a guy in a full turkey outfit. He’s probably going to be out in the parking lot tailgating as he’s a prime candidate to show up in one of those pre-game bumpers when they really have to drive home that, yes, this is a Thanksgiving NFL game. Chances are, he’s also a real “party animal” so don’t expect him to actually make it into the game. We might catch up with him at halftime when the alcohol is starting to seep out of his pours, creating a kind-of gravy glaze over his turkey suit. After that…we won’t see him again until next season.

2. The Guys Wearing Turkeys On Their Head

Now you’ll be seeing these guys plenty before, during, and after the game. It’s the bare minimum you can do, really, to meet the demands of the TV cameraperson. They’ll be scanning the crowd for Thanksgiving-related fans all day long and that $19.99 cooked turkey cap is just enough to make sure you’ll make the cut. After that, it’s up to you really. If you want to keep showing up after commercial breaks and in-between plays, you’re gonna need to get animated. Angry, even. But never take that turkey off your head, sir. It’s what makes you you.

3. A Bunch of Pilgrims

Yes, this is Thanksgiving cosplay, but if you’ve watched enough Detroit Lions games on Thanksgiving you know that there are a father and daughter who dress up as pilgrims every year. It’s their thing. Mark Mullins started donning the old-timey gear in 1991, his first year as a season ticket holder, and his daughter joined him in 2002 when she was 12-years-old. Now 27, she’s still there by his side in full pilgrim gear each year. The silly tradition actually comes with a bit more emotional weight these days as Mark was diagnosed with Stage II kidney cancer a few years back. Still, he persists at putting on the pilgrim outfit and you can expect to see both of them out there today.

To all of our fans, from the entire Detroit Lions family, Happy Thanksgiving! We are grateful for you. pic.twitter.com/pOurdmyk4a

5. The Family That You Realize Goes To Every Detroit Lions Thanksgiving Game

6. The Fan With The Sign Explaining How Long Detroit/Dallas Have Been Playing on Thanksgiving

How weirdly specific of you, sports fan. You did a great job on your homemade “Lions & Thanksgiving Since 1934” sign. The sparkle on 1934 was a bold but beautiful choice.

8. The Fan Who Still Brought the D and the Fence with Them

This has nothing to do with Thanksgiving. It’s just an inevitable mainstay of literally every NFL game since 1963 (we’re assuming). Why? Why do we still need this at every game? Who demands this? Who stays up the night before to make their fence sign? Who wants to sit behind someone constantly waving two signs every time our team is on defense? Who keeps letting this guy in???

Happy Thanksgiving. Even to you, D-Fence guy.