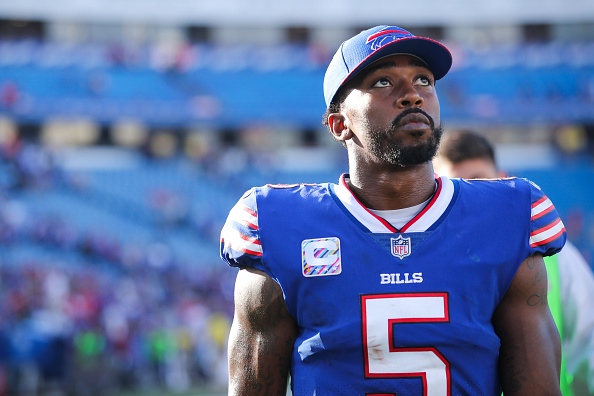 Watching football on Thanksgiving is one of the greatest annual traditions to have ever been invented in the history of mankind. It’s like fireworks on the Fourth of July, wearing costumes on Halloween, and eating hearts made of chalk on Valentine’s Day.

It is also bittersweet, as the annual Thanksgiving Day games are usually an indicator that there’s not much football left to play in the regular season. So for the fans of the teams that will not be making the playoffs this year, these next few weeks are all they have left to watch of their favorite squad this season.

Besides the games being played on Thanksgiving, Week 12 of the 2017 NFL season features a number of intriguing matchups. For more on those including the full schedule, each game’s announcers, and the TV Maps for each matchup, do yourself a favor and take a gander at the guide below.

Vikings notes – Minnesota has not been too successful when it comes to playing on Thursdays in the past two decades. The Vikings are just 1-7 in their last eight Thursday games and the last time they won a matchup on Thanksgiving was back in 2000 when they defeated the Dallas Cowboys.

Chargers notes – After dropping their first four games of the season, Los Angeles has now won four of their last six. Given how weak the AFC is shaping up this year, the Chargers at 4-6 still have a legitimate shot to make the playoffs as only one of their final six opponents this season currently has a winning record.

Cowboys notes – Oddly enough, since Dallas lost running back Ezekiel Elliott to a six-game suspension in Week 10, their passing attack has suddenly become the biggest weakness of their offense. The Cowboys are averaging just a measly 119.5 passing yards in the last two weeks without Elliott on the field. That doesn’t bode well for Dallas considering the Chargers are coming off a game in which they had five interceptions.

Giants notes – New York won last week for just the second time all season and the result had a lot to do with them forcing the Kansas City Chiefs to turn the ball over three times. Coincidentally, the Giants’ other win in 2017 came during the only other time this year they forced their opponent to commit three turnovers.

Bills notes – After benching him in Week 11, Buffalo has renamed Tyrod Taylor as their starting quarterback for their matchup with the Chiefs this week. It must be nice to only be wanted when your backup throws five interceptions in one game.

Chiefs notes – Kansas City was flying high early this season, winning each of their first five games. But now the Chiefs have lost four of their last five and their hope for a top seed in the playoffs has quickly dwindled away.

Titans notes – Back in Week 6, Tennessee defeated the Colts for the first time in since 2011. But that game was at home and the Titans have not won a matchup on the road in Indianapolis since 2007. Can Tennessee get a win on Sunday and break another drought against the Colts?

Colts notes – Indianapolis quarterback Jacoby Brissett is expected to play on Sunday against the Titans despite still being in concussion protocol after the team’s practice on Wednesday. If for some reason he is unable to suit up this week, the Colts would be looking at Scott Tolzien as their starting signal caller on Sunday.

Browns notes – If Cleveland is ever going to win a game this season it is going to be with rookie DeShone Kizer as their starting quarterback. Browns coach Hue Jackson said on Monday that the team will be sticking with Kizer as their starter for the rest of the year. The young Cleveland quarterback has thrown 14 interceptions and just five touchdowns in nine games this season.

Bengals notes – It has been quite a while since Cincinnati lost in a matchup with the Browns. The Bengals have won the last six games between the two teams and have done so by outscoring Cleveland 183 to 47.

Bucs notes – Tampa Bay will be without quarterback Jameis Winston for the third straight game this week due to a shoulder injury. However, with Ryan Fitzpatrick starting under center for the last two games, the Bucs have found a way to get a win in both of their matchups.

Falcons notes – As of Wednesday, Atlanta running back Devonta Freeman remains in the league’s concussion protocol. Freeman missed the Falcons’ game Monday night against the Seattle Seahawks due to the concussion and backup Tevin Coleman only rushed for 43 yards on 20 carries.

Dolphins notes – It has been more than eight years since Miami went on the road and defeated the Patriots. In fact, since Dolphins Hall of Fame quarterback Dan Marino retired in 2000, the team has only won three of their last 17 games in New England.

Patriots notes – Having already thrown 22 touchdowns so far in 2017, Patriots quarterback Tom Brady needs to toss just 12 more scores this season to set the NFL record for most touchdowns thrown by a quarterback at the age of 40 or older.

Bears notes – After missing a game tying field goal against the Detroit Lions last week, Chicago parted ways with kicker Connor Barth on Monday and replaced him with Cairo Santos. Undrafted out of Tulane, Santos has been in the NFL since 2014 and last played for the Kansas City Chiefs in Week 3.

Eagles notes – Philadelphia is off to an amazing start this year, but they have yet to really play a challenging opponent. Of the 10 games the Eagles have played this season, only two of them have been against a team which currently has a winning record.

Panthers notes – For the first time since Week 2, Carolina is expected to have veteran tight end Greg Olsen back on the field for their offense on Sunday. Olsen has been out of action this season with a broken foot and is eligible to be activated off of injured reserve this week.

Jets notes – New York got off to a surprising start this season by winning three of their first five games. However, the Jets have lost to all but one of their last five opponents since Week 6 and their chance of getting to the playoffs this year seems all but gone.

Seahawks notes – In what once used to be a fun rivalry just a few years ago, Seattle has had no trouble beating the 49ers during the season. The Seahawks have been victorious in nine of the last 10 meetings between the two teams with their last loss coming in 2013.

49ers notes – After getting their first win of the season over the New York Giants in Week 10, San Francisco will be attempting to get their second-straight victory on Sunday when they take on Seattle. If somehow they are able to defeat the Seahawks this week, it will be the first time the 49ers will have won two games in a row since Week 11 and 12 of the 2014 season.

Saints notes – New Orleans has won eight straight games and have been able to do it without relying on quarterback Drew Brees for the first time in a while. In fact, Brees’ current pace has him finishing the year with just 24 touchdown passes, which would be the lowest he has thrown in a single season since 2005 when he played for the then San Diego Chargers.

Rams notes – Los Angeles suffered their third loss of the year last week and the blame can be equally shared on both sides of the ball. The Rams’ offense finished with its second-lowest total yardage amount (254) and their defense allowed more total yards on Sunday (451) than they have to any opponent in 2017.

Jaguars notes – Jacksonville defensive lineman Calais Campbell is currently tied for the league lead in sacks this season with 11.5. If he is able to maintain his position atop the sack leaderboard for the remainder of the year, he would be the first Jaguars player to ever lead the NFL in sacks during a single season.

Cardinals notes – While their defense is one of the league’s best at stopping the run in 2017, Arizona’s own rushing attack may actually be the NFL’s worst this season. The Cardinals’ offense has only surpassed 100 rushing yards in two of their 10 games this year and six times this season they have failed to gain at least 50 yards on the ground.

Broncos notes – Not only will Denver have a new starting quarterback in Paxton Lynch this week, the team will also have a new person calling the offense’s plays. The Broncos opted to get rid of offensive coordinator Mike McCoy on Monday and replace him with Bill Musgrave, who was serving as the team’s quarterbacks coach. Musgrave has previously been the offensive coordinator for the Carolina Panthers, Jacksonville Jaguars, Minnesota Vikings, and Oakland Raiders.

Raiders notes – Speaking of firing coaches, Oakland let go of defensive coordinator Ken Norton Jr. on Tuesday and named John Pagano his replacement. Pagano was last in charge of a team’s defense from 2012 to 2016 when he was with the San Diego Chargers.

Packers notes –  If anyone is trying to find a bright spot from Green Bay’s last three weeks of football, just take a look at how much their run defense has improved since their bye in Week 8. In their last three games, the Packers are allowing their opponents to rush for an average of only 59 yards. Much better when compared to the 125.7 rushing yard average they were allowing during the first seven weeks of the season.

Steelers notes – For the first time since 2004, Pittsburgh has won at least eight of their first ten games in a season. The Steelers made the playoffs each the past two times they accomplished this feat (2004 and 2001), but each of those seasons also ended with a loss in the AFC Championship to the New England Patriots.

Texans notes – As crazy as it may sound, Houston’s shot at winning the AFC South this season is not completely out of the question yet. If the Texans are able to win on Monday and defeat the Tennessee Titans in Week 13, their record at 6-6 would be exactly the same as it was through the first 13 weeks of the past two seasons that saw them finish first in the AFC South.

Ravens notes – After not allowing the Green Bay Packers to score a single point last week, Baltimore has shutout at least three opponents in a season for the first time since 2000. The Ravens’ team record for shutouts in a single season is actually held by that 2000 team when they were able to hold a total of four opponents scoreless during the year.