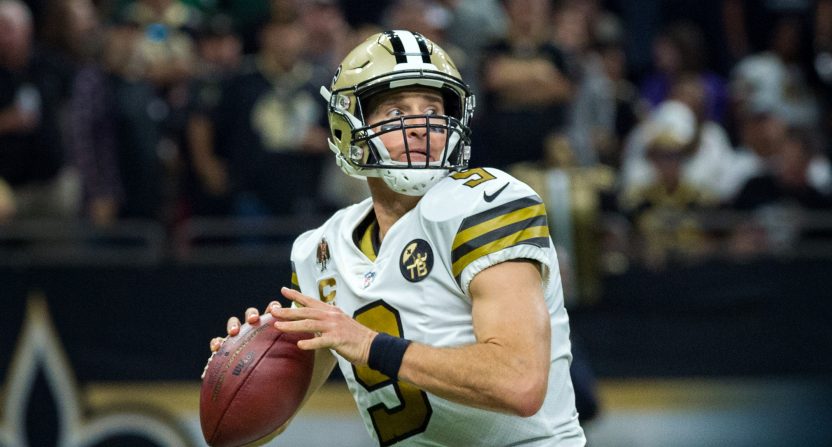 The 2018 NFL regular season is now entering the home stretch, which means it’s no longer too early to gauge the MVP race with a straight face. Entering Week 12, here’s a look at the top 10 candidates in the race for the most illustrious individual award in professional football.

1. New Orleans Saints QB Drew Brees (last week: 1): The 39-year-old is on pace to set new single-season records for completion percentage (76.9) and passer rating (126.9). He was nearly perfect Sunday in a blowout victory over the defending Super Bowl champions, and his Saints are now 9-1.

2. Los Angeles Rams QB Jared Goff (last week: 5): It was Goff, not Todd Gurley, who led the way for the Rams offense in an historic victory over the Kansas City Chiefs. He’s posted passer ratings above 110 in five consecutive games for the 10-1 Rams.

3. Los Angeles Rams DT Aaron Donald (last week: 6): But that win probably doesn’t happen if not for Donald, who was dominant up front and now has 14.5 sacks and three forced fumbles. He could still make a run at the single-season sack record of 22.5.

4. Los Angeles Rams RB Todd Gurley (last week: 4): The league’s leading rusher and touchdown leader wasn’t a big factor against the Chiefs, which could hurt his case as well as those of Goff and Donald. Brees has a serious edge right now.

5. Kansas City Chiefs QB Patrick Mahomes (last week: 2): A five-turnover performance against the Rams puts the second-year first-round pick in a tough spot. He’s had a hell of a season but is losing momentum in this race. He now has 12 turnovers in 11 games. Brees has one.

7. Indianapolis Colts QB Andrew Luck (last week: NR): Now a top-10 passer who has more touchdowns than anybody except Mahomes, the well-protecting, red-hot Luck is gaining steam as the Colts streak toward a potential playoff berth.

8. Pittsburgh Steelers QB Ben Roethlisberger (last week: NR): His rate-based numbers aren’t there, but Roethlisberger came up big when it mattered against the Jacksonville Jaguars. He has the Steelers riding a six-game winning streak.

9. Seattle Seahawks QB Russell Wilson (last week: NR): The 29-year-old has a 117.1 passer rating and an 18-to-2 touchdown-to-interception ratio dating back to Week 3, and the Seahawks are 5-3 in those games.

10. Houston Texans QB Deshaun Watson (last week: NR): The second-year first-round pick wasn’t good against the Washington Redskins in Week 11, but we needed a 10th candidate and he’s had a strong overall season for a team that has won 10 straight games.