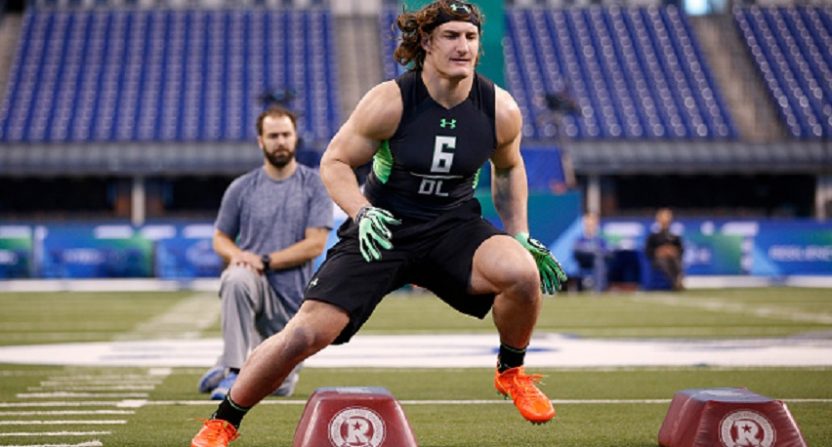 The NFL Scouting Combine is the next big event in the now year-round NFL season, and it starts next week. The Combine, which hosts most NFL personnel, agents, and top draft prospects every year, is the featured event of the lead-up to the NFL Draft process and arguably the most important seven days in the draft process for NFL decision-makers.

There’s a lot involved with the NFL Scouting Combine, with 330 players, even more NFL scouting and coaching staff members, and droves of media and fans all making the pilgrimage to Indianapolis. Here are the 10 most important questions answer to get you prepared for the 2017 NFL Scouting Combine

1. When and where can I watch?

The NFL Scouting Combine is technically from Feb. 28 through March 6, but the first on-field workouts don’t start until March 3.

Players arrive in four staggered groups, sorted by position and don’t do the on-field portion until Day 4 in Indianapolis (their last day). During the first three days, players are having medical examinations, measurements, interviews, psychological testing, and more. The full schedule can be found here.

There are 330 players who are officially invited each year, and that official list with the position group they’ll be working out with can be found here. For the most part, the National Football Scouting, the scouting company that is funded by most NFL teams and works exclusively to provide pre-season grades for NFL teams and evaluate for the NFL Combine each year, does a great job in finding the best 330.

Aside from a few “combine snubs” that probably deserved to be there, the NFL explicitly didn’t invite prospects who have violent crime convictions in their past. Players like Ole Miss’s Chad Kelly, Baylor’s Ish Zamora and Oklahoma’s Joe Mixon were “ineligible” for an invite to the NFL Combine.

The interview process is, for most players, probably the most important part of the NFL Combine process. NFL teams get their own individual room during a 20-minute “speed date” process along with every other team, and choose which players they wish to speak with. These interviews, which include all of the top decision makers of an NFL front office and coaching staff, are the closest these players will come to an actual job interview-esque situation.

Each player is poked and prodded during the NFL Draft process, but the interviews at the NFL Scouting Combine (and when players are brought in for private workouts in April) give each player a chance to win over teams and earn a spot on their draft board. While those outside the NFL evaluate as many players as humanly possible, NFL teams only draft around eight on average. Which eight or so players they want to invest money, draft choices, and future equity in can be decided during these interviews.

4. What do these drills show, anyway?

When people think of the NFL Scouting Combine, they immediately think of the 40-yard-dash. But each player (barring injury) is tested on their 40-yard time (as well as their 10 and 20-yard splits), the bench press, vertical and broad jump, short shuttle (players right five yards left, then 10 yards right, then five yards left to the starting point) and L-cone drill (players run in an L-shape around three cones, each of which are five yards apart).

What’s most important in today’s NFL is how these numbers are used. Teams have gotten smarter about finding ways to combine all of these numbers (and including height and weight) to giving one or two “athletic scores,” which conceptualizes these numbers easier. Teams also rely on thresholds for each position to exclude, include, or review certainly players and start trimming down the draft class.

5. Does every drill matter for every position group?

For receivers, running backs and defensive backs, the 40-time shows top-end speed, the shuttle drills show fluidity and change of direction, and the broad and vertical jump show initial explosion.

For lineman and linebackers, the bench press showcases raw power, the broad and vertical jump show short-area explosiveness and force, and the 10-yard split can show initial speed and get off.

6. What about the quarterbacks?

Quarterbacks can benefit from showing heightened athleticism, and I’d expect most of the top quarterbacks to test well relative to past years. But for quarterbacks, how they fare in positional drills on the field and their interviews and white board work off field can make or break a quarterback’s grade.

With six juniors declaring, and much debate on how these passers should be ranked outside and inside the NFL, the Combine will go a long way in shaping the 2017 quarterback class.

7. Who are the top athletes to watch?

It’s always tough to predict who will be all of the “winners” of the Combine, but with some really special tight ends in the class, we could see some impressive players at that spot. O.J. Howard/Alabama and David Njoku/Miami (FL) should battle for the top tight end spot. Also, Tyus Bowser/OLB/Houston, Josh Harvey-Clemons/SAF/Louisville, Jordan Willis/DE/Kansas State, Obi Melifonwu/SAF/UConn and Jabrill Peppers/SAF/Michigan all should post great Combine performances.

8. What players or position groups have the most to gain or lose from the Combine?

The top quarterbacks all have a lot to prove, and the workouts among the top passers will be closely watched to start breaking the ties. The pass rusher, tight end, and cornerback class are all very strong, and NFL teams might change the top of their position draft boards based on the Combine.

It’s a weak offensive line class and is wide open in the second tier of receivers, so players who can use the Combine to step up at those positions can make a world of difference in their draft stock.

I think John Ross/WR/Washington will run in the low 4.3s (if not faster), and he’s my favorite to have the lowest time.

Sheldon Gibson/WR/West Virginia, Kermit Whitfield/WR/Florida State, Adoree Jackson/CB/USC and draft enigma Jabrill Peppers/SAF/Michigan should all be for sure in the 4.4s and maybe in the 4.3s.

10. Is there anything else that’s going on during the NFL Combine behind the scenes?

The day after the NFL Combine is officially finished, NFL teams can start speaking to impending free agents, and March 9 at 4:00 p.m. EST is the official start of the league year. However, you’d be wise to believe that, with every NFL decision maker and agent in the same place at the same time during the NFL Combine, there are many “off the record” discussions going on.

Also, the Combine is where blockbuster NFL Draft trades start to form. Last year, the Rams’ trade up for Jared Goff and the Eagles’ trade up for Carson Wentz were beginning to form during the NFL Combine. And this year, if Jimmy Garoppolo and/or Kirk Cousins aren’t traded before teams arrive in Indianapolis, you can be sure they’ll be the hot button items during late night meetings.