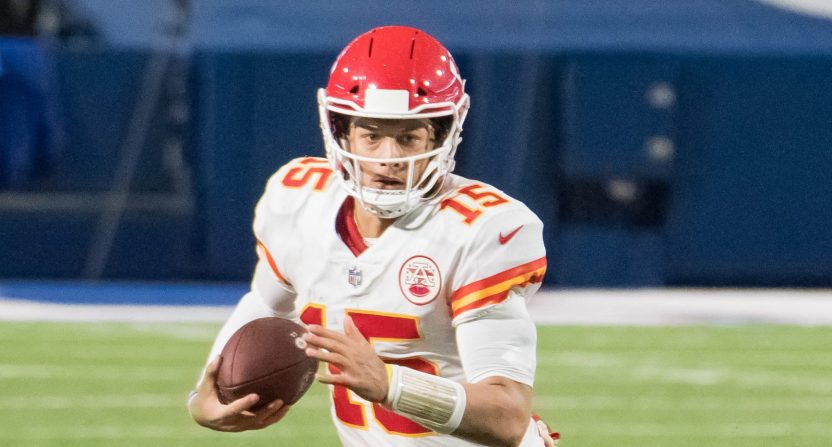 Throughout the NFL season, we’ll be ranking all 32 current starting quarterbacks from best to worst. Here’s the breakdown following Week 6:

32. Kyle Allen, Washington Football Team: Dwayne Haskins’ replacement wasn’t bad at all under tough circumstances in his first start as Washington’s quarterback, completing 31-of-42 passes, while throwing two touchdowns to one pick. That said, he was still the NFC’s lowest-rated qualified passer in 2019.

30. Daniel Jones, New York Giants: His leash should be a little longer than Darnold’s, but the NFC’s lowest-rated passer has a 3-to-6 touchdown-to-interception ratio.

29. Carson Wentz, Philadelphia Eagles: He rebounded to an extent with a pair of touchdown passes as the depleted Eagles put up a fight against Baltimore, but Wentz still has a sub-60 completion percentage and nine interceptions.

28. Drew Lock, Denver Broncos: A shoulder injury could be a factor, but Lock was a mess against the New England Patriots in Week 6. That’s enough to raise concerns within a small overall sample.

27. Kirk Cousins, Minnesota Vikings: The inconsistent Cousins has been a major disappointment this season. He now leads the NFL with 10 interceptions. The lack of consistency has been deadly.

26. Andy Dalton, Dallas Cowboys: The veteran looked like a backup making a spot start against the so-so Arizona Cardinals defense. That’s his profile at this point. It’s going to be rocky.

25. Nick Foles, Chicago Bears: The Bears are winning because of their defense and not Foles, who has the league’s fifth-lowest qualified passer rating.

24. Philip Rivers, Indianapolis Colts: It’s been a roller-coaster ride for the veteran, who doesn’t look strong enough to string together consecutive quality outings at this point.

23. Cam Newton, New England Patriots: Strong rushing numbers don’t make up for the fact that he’s thrown two touchdown passes this season. Newton just hasn’t put it together, but at least he’s been healthy (a bout with COVID-19 notwithstanding).

22. Matthew Stafford, Detroit Lions: Despite a win in Week 6, the veteran just isn’t getting it done. His broad numbers aren’t bad, but he’s been off target far too often and isn’t closing.

21. Baker Mayfield, Cleveland Browns: Ugh. Mayfield has been remarkably inconsistent, and he now owns a sub-50 passer rating on third down.

20. Tua Tagovailoa, Miami Dolphins: We’re keeping him out of the bottom tier based on his ceiling. Besides, the rookie No. 5 overall pick has a perfect career completion rate (on two attempts).

19. Joe Burrow, Cincinnati Bengals: The top pick is beginning to look like he’s in over his head with limited support. He hasn’t thrown a touchdown pass since Week 4 and has a 73.1 passer rating since then.

17. Teddy Bridgewater, Carolina Panthers: Just when we were feeling good about Bridgewater’s trajectory, the 27-year-old crapped the bed against the tough Bears defense. He still has a lot to prove.

16. Matt Ryan, Atlanta Falcons: That was at least one hell of a bounce-back performance in Week 6. Ryan hasn’t been consistently good this year, but he still has 11 touchdown passes to just three picks.

15. Kyler Murray, Arizona Cardinals: He still misses on a lot of deep balls, but Murray has flashed brilliance with both his arm and legs early this season. I’d take him over the top pick from the draft before his (Mayfield) and the draft after his (Burrow).

13. Justin Herbert, Los Angeles Chargers: The rookie top-10 pick’s deep ball is a work of art, and he’s the league’s highest-rated passer on third down. He’s running away with Offensive Rookie of the Year honors coming off a bye week.

11. Tom Brady, Tampa Bay Buccaneers: There have been some ups and downs, but the 43-year-old’s numbers are actually up from last season. The man won’t be defeated by Father Time.

10. Josh Allen, Buffalo Bills: Allen peaked higher than almost anyone on this list but has come crashing back to earth with a sub-60 completion percentage and a 75.9 passer rating in back-to-back losses.

9. Jared Goff, Los Angeles Rams: A “meh performance” against the hurting 49ers costs him here, but Goff has been well above average across the board on the whole.

8. Deshaun Watson, Houston Texans: Houston is a mess, but that ain’t on Watson. The league’s eighth-highest-rated passer has a 118.2 rating in his last four games.

7. Ben Roethlisberger, Pittsburgh Steelers: The Steelers are 5-0, Big Ben looks healthy, and he’s thrown 11 touchdown passes to one pick. No complaints coming out of Pittsburgh.

6. Drew Brees, New Orleans Saints: He made plays when it mattered in a Monday night win ahead of the Saints’ Week 6 bye, but Brees is rarely a game-changer with his arm. He’s on the fringe of the top tier at age 41.

5. Ryan Tannehill, Tennessee Titans: Dude is 22-for-26 with 12 touchdown passes in the red zone, which is out of this world. And nobody’s been as good on paper as Tannehill in his last 15 starts. Time to start believing?

4. Aaron Rodgers, Green Bay Packers: Can’t totally hold one poor performance versus a strong defense against Rodgers, who was fire before laying an egg against the Buccaneers. We’ll dock him some points, but we’re expecting a rebound. He’s still the NFL’s highest-rated active deep passer.

3. Derek Carr, Las Vegas Raiders: It’s time to stop underestimating Carr, who doesn’t have a killer arm and isn’t consistently dominant, but now has 11 touchdowns to one pick and the league’s second-highest passer rating for a winning team coming out of its bye week.

2. Patrick Mahomes, Kansas City Chiefs: That’s 15 touchdown passes to one pick for the league’s fourth-highest-rated passer, and the numbers don’t do justice to his impact. He’s right there with…

1. Russell Wilson, Seattle Seahawks: What more do you want from the league’s highest-rated passer and the quarterback for the NFC’s only perfect team? Wilson holds strong through a bye week.