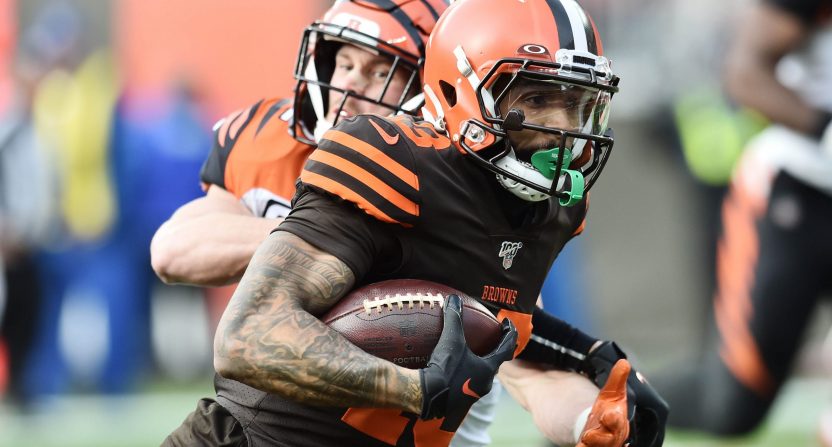 Odell Beckham Jr. cleared waivers on Tuesday, which made the former Cleveland Browns wide receiver an unrestricted free agent for the first time. While things didn’t end well in Cleveland, the three-time Pro Bowl wide receiver makes for an enticing proposition for NFL teams looking to shore up their receiving corps and compete for the playoffs. The feeling appears to be mutual.

Former Browns’ WR Odell Beckham Jr. wants to join a postseason contender for the remainder of this season, sources say.https://t.co/izp3apLUWM

Almost immediately, several NFL teams expressed interest in some form, including the Green Bay Packers, San Francisco 49ers, New England Patriots, New Orleans Saints, and Seattle Seahawks. However, some of these franchises have emerged as the favorites for his services.

The Seahawks have definitely made their intentions known by reaching out directly to Beckham’s representatives, per Jeremy Fowler.

The Seahawks have been in touch with Odell Beckham's reps during his free agency, per source.

With the return of Russell Wilson, adding Beckham to a receiving corp that includes D.K. Metcalf and Tyler Lockett would give Seattle a chance to get back in the playoff hunt. That said, if Beckham wants to join a surefire contender, that might not be the Seahawks, who currently sit at 3-5 and are far behind their divisional rivals, the Arizona Cardinals (8-1) and Los Angeles Rams (7-2).

Meanwhile, Pro Football Talk’s Mike Florio believes there’s a “firm belief” that Beckham will end up signing with the New Orleans Saints, who had talked with the Browns about a trade before the receiver was released.

There’s a firm belief in some circles that OBJ will end up with the Saints, who tried to trade for him before the deadline. The question is whether he’s comfortable with the QB situation and willing to take what the Saints can afford to pay.

“There’s a firm belief in some circles that OBJ will end up with the Saints, who tried to trade for him before the deadline,” Florio said. “The question is whether he’s comfortable with the QB situation and willing to take what the Saints can afford to pay.”

As Florio notes, Beckham would immediately be the No. 1 threat in New Orleans, which is currently 5-3 and, one game out, from the NFC South lead. Of course, the quarterback situation is a bit iffy there, which could be an issue for the wideout.

The big question will be how the Saints can afford to pay Beckham and might need to get very creative in order to make a deal happen. The good news for them is that the Saints won’t have to pay the $7.5 million that was remaining on Beckham’s 2021 salary because he was released.

Meanwhile, Dianna Russini reported on Wednesday that Beckham appears to be focused on the Saints, Chiefs, and Packers, which makes a lot of sense since all three are strong contenders for the playoffs, even if the Chiefs have fallen off a little bit this season.

On the day in which he could make his final decision, free-agent WR Odell Beckham Jr. is honing in on the Chiefs, Packers and Saints, per league sources.

The chance to catch passes from Patrick Mahomes or Aaron Rodgers has to be too much to pass up for Beckham, who would love to boost his on-field production in order to get a bigger payoff on his next contract.