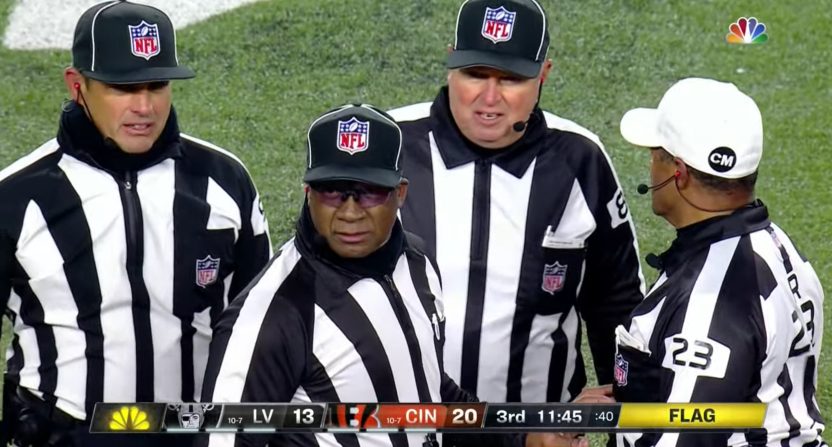 Late in the second quarter, an inadvertent whistle blew while the ball was in the air on a Joe Burrow pass sent to Tyler Boyd. It appeared obvious that a whistle blew and the play should’ve been blown dead but instead, the touchdown stood and the Bengals extended their lead. The Bengals wound up winning 26-19 over the Las Vegas Raiders.

After the game, NFL Senior VP of Officiating Walt Anderson spoke to pool reporter Paul Dehner and was asked about the call. Anderson revealed that the crew determined that the whistle blew AFTER Boyd caught the ball and it was a legal play and that the play wasn’t reviewable.

Here is the play in question and while I’m not a referee, even I can tell that the whistle starts blowing while the ball is in the air. Mainly because I have functioning eyes and ears.

Maybe an audio sync issue or some other glitch, but you could definitely hear a whistle mid-pass on the broadcast. pic.twitter.com/FZctJVMtLd

Let me be clear, this didn’t cause the Raiders to lose the game. The Raiders made plenty of mistakes throughout the game and got away with a soft roughing the passer penalty on the final drive that the Bengals were quite simply the better team.

I don’t even care hearing about how difficult the job is anymore, because that’s all I hear from people when referees make a boneheaded error like this. Every job is difficult these days and yeah, maybe millions of people don’t see us making a mistake but if you (the reader) or I were this terrible in our lines of work, we would’ve been fired a long time ago. These people though are referred to as the “best of the best” in their profession and the depressing part is they’re actually right. These people are the best of the best because somebody has to be.

This wouldn’t be so bad if referees actually admitted when they make mistakes because these people are human and humans do make mistakes. The problem is that the only explanation we get is from an NFL representative via a pool report and not from the referees themselves. And referees very rarely admit any fault because they don’t have to admit fault. They’re so entitled because they don’t have to answer to the fans or the media and we have no clue if they’re ever held accountable by the league. And when anyone within the league dares to criticize them, they get fined. So yeah, it’s no wonder it’s this bad.

I’m fully aware humans make mistakes but if someone is going to give off a perception that they’re perfect, then I’m going to hold them to that standard they set for themselves. That’s why what happened during the Raiders-Bengals game was inexcusable and Jerome Boger and co. deserves this criticism. Even if the Bengals would’ve won anyway.