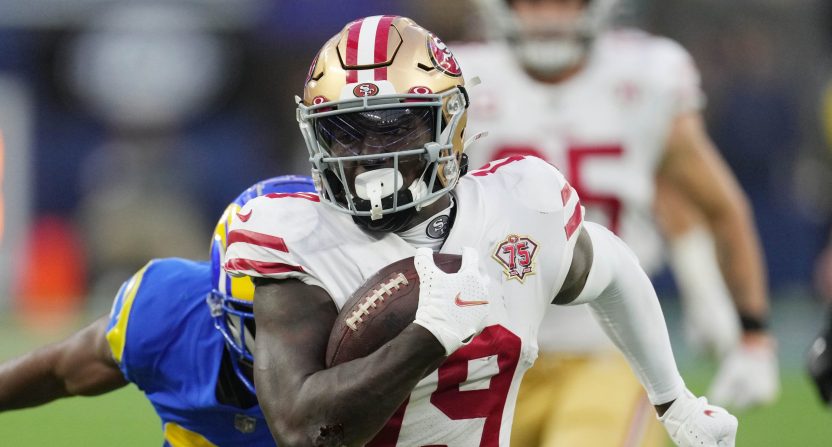 We really shouldn’t be surprised. After watching quarterbacks exert power and influence in recent years, the guys who catch their passes are doing the same.

Deebo Samuel has become the latest disgruntled superstar wideout to demand a trade and probably a new contract. He follows in the footsteps of Tyreek Hill and Davante Adams. Samuel might not be the last. A.J. Brown, Terry McLaurin, and DK Metcalf are also asking for more cash in an exploding wide receiver market.

Adams forced his way out of Green Bay, which has the best quarterback in the sport in Aaron Rodgers, to join the Las Vegas Raiders, who have the worst QB in their own division. Why? So he could become the league’s highest-paid wide receiver with a five-year contract that’s worth $141.25 million ($67.5 million guaranteed).

Hill forced his way out of Kansas City, the best team in sport the past three years, to join a Miami Dolphins team that hasn’t won a playoff game since 2000. Why? So he could eclipse Adams to become the league’s highest-paid wide receiver with a four-year extension that’s worth up to $120 million ($72.2 million guaranteed).

While management and fans might be stunned at the numbers, this has been a long time coming. Call it a market correction. In today’s NFL, wide receivers have never been more valuable. The majority of rules adopted in recent years have favored the passing game. The league wants more offense and more scoring. The fastest way to get into the end zone is with a game-breaking receiver.

In 2021, according to spotrac.com, wide receivers were the third-highest paid by position with a franchise tag value of $15.9 million per season. Only quarterbacks ($25.1 million) and defensive ends ($16 million) were paid more. But now with new deals for Adams, Hill, and Stefon Diggs (he’s staying with the Buffalo Bills thanks to a four-year, $96 million extension ($70 million guaranteed)), wideouts are cashing in unlike any position other than quarterback.

Wide receivers have leverage, and they’re using it. They learned by watching Tom Brady, Russell Wilson, Matthew Stafford, and Rodgers exert their power. And those guys probably learned it from watching their peers in other sports, like NBA players. If you’re willing to make a mess, you can make demands and get what you want.

What makes Samuel’s situation different is that he’s clearly the best offensive player on his team. He’s not catching passes from an MVP like Patrick Mahomes or Rodgers. He has had to overcome the limitations of Jimmy Garoppolo. Samuel is a dual-threat who is a playmaker in the passing game and running game.

The Packers and Chiefs will probably still be playoff teams without Adams and Hill. But Samuel has such a unique skillset that without him, the 49ers might go from almost reaching the Super Bowl to a losing record.

Now, you could also make the argument that both sides have a lot to lose if they can’t reach an agreement. San Francisco coach Kyle Shanahan is one of the NFL’s top offensive minds. He knows how to scheme players wide open and create mismatches. Shanahan routinely has running backs line up at wide receiver and puts wide receivers in the backfield.

Cian Fahey of Off The Ball Sports wrote that Samuel might not be as valuable playing for another team and coach.

Mutually negative outcome. He’s the perfect WR for their offence, won’t be as effective elsewhere and they’ll struggle to replace him. https://t.co/JnL9CnOGrc

The entire league will be watching. With the draft next week, there’s the possibility that Samuel and other receivers could be dealt. McLaurin has been great since Day One for the Washington Commanders despite not having a decent quarterback. Metcalf is on a rebuilding Seattle Seahawks team that just traded the greatest passer in franchise history. Brown is the lone receiving threat for the Tennessee Titans and isn’t even their top offensive option.

They all have a lot of power. Let’s see what they do with it.