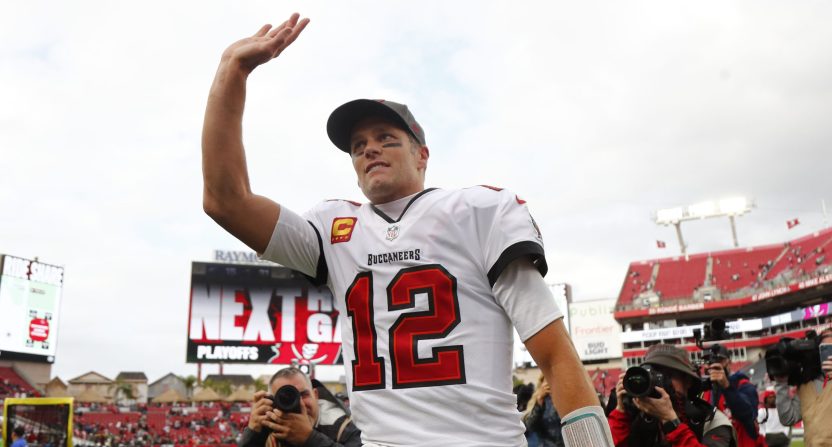 On Saturday, ESPN’s Adam Schefter and Jeff Darlington reported that Tampa Bay Buccaneers quarterback Tom Brady was retiring from the NFL. However, Brady disputed the report, and said on Monday that he’s “still going through the process.”

Well, on Tuesday, Brady finally made the retirement official. The seven-time Super Bowl champion announced the news Tuesday morning on social media. And Schefter was surely quite happy to relay the news after his initial report was disputed.

This news basically confirms that the report from Schefter and Darlington was correct all along (unless Brady truly made this decision over the last two days, which is hard to believe), but Brady wanted to be the one to make the announcement (and get big numbers on his social media pages).

So, the GOAT is officially hanging ’em up, after a mind-blowing 22-year career that featured winning the NFL MVP three times and Super Bowl MVP five times (in his seven titles).

The 44-year-old was still an elite quarterback at the end, winning the Super Bowl MVP in the 2020 season and putting together a 43-touchdown, 102.1 passer rating in 2021. He likely could’ve kept playing quarterback at a high level for a few more years, but he’s already done plenty enough both in terms of football success and on the moneymaking front- and while keeping his long-term health and well-being in a good place despite 22 years in a violent sport. And he made it clear last week that his family would be the primary factor for when he decides to retire.

There’s also the football impact of this: where do the Buccaneers go from here, and who’s their 2022 quarterback? Additionally, the NFC will look a whole lot different — and likely be much worse — next year without Brady, potentially without Aaron Rodgers, potentially without Russell Wilson, and with Sean Payton stepping away from coaching.

Here’s a sampling of the reaction to Brady making his retirement official:

A statement from NFL Commissioner Roger Goodell on the retirement of Tom Brady. pic.twitter.com/jkuDjeRVjE

"Saying goodbye to a legend is never easy, but we wish him continued success in retirement."

It was quite the ride.

Thank you and congratulations, @TomBrady. pic.twitter.com/0gPwUROEkz

A privilege to watch and a dream come true.

this better be real

Going to miss you, @TomBrady. pic.twitter.com/u0at0Ek1Ox

When I think about Tom Brady, he’s a true winner who handled himself with class throughout his entire career.

Even with those seven Super Bowl rings, he never lost that competitive fire to be the best.

Congrats to the Greatest. @TomBrady #12

What a career it was for Tom Brady pic.twitter.com/rF9MVBD6ZF

🐐 Yards
🐐 Completions (most ever)

Brady retires with a 9-part Instagram post that never mentions the Patriots, Belichick or the Krafts. INTERESTING.https://t.co/81P74w9SMt

Tom Brady, known for dropping a pass in Super Bowl LII and failing to shake Nick Foles' hand, has announced his retirement from the NFL.

Tom Brady has officially announced his retirement after 22 seasons in the NFL. pic.twitter.com/DhdlRLrbr8

It’s a day to celebrate Brady.

As journalists, Schefter and Darlington should be celebrated, too. #ESPN #Brady