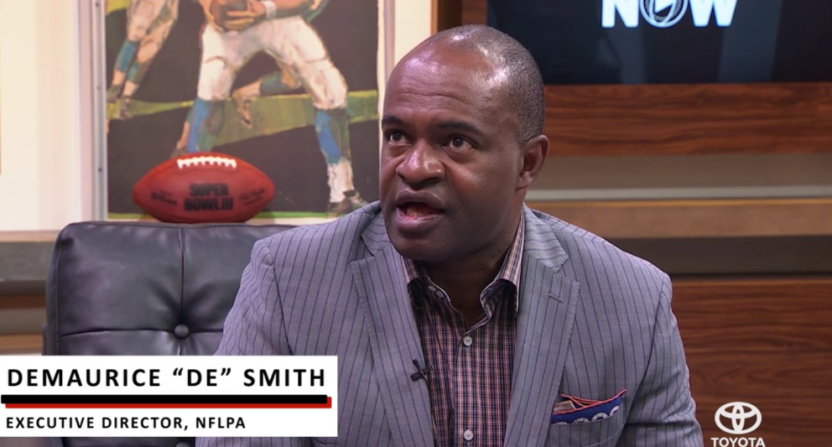 Four years from the end of the NFL’s current collective bargaining agreement (following the 2020-21 season), either a strike or a lockout seems highly likely, according to the head of the NFL players’ association.

That would be NFLPA executive director DeMaurice Smith, who has been voicing his concerns about the current agreement (struck in 2011) for some time, and now seems even more certain that future CBA negotiations will not be easy.

Smith recently spoke to Albert Breer of The MMQB on Sports Illustrated’s SI Now digital video show about numerous topics, including the NFL’s six-game domestic violence suspension for Dallas Cowboys’ running back Ezekiel Elliott, something that has provoked further contention between the NFL and NFLPA, with the NFL accusing the players’ association of leaking disinformation tarnishing the accuser’s reputation to reporters. But perhaps the most notable comments he made were about the chances of a lockout or strike in 2021 once the current CBA expires. Smith called a work stoppage “a virtual certainty”:

“I think that the likelihood of either a strike or a lockout in 2021 is almost a virtual certainty,” Smith said. When asked if that would include missed games, he said “I don’t know now, but I mean let’s look at our history. The owners do a deal in 2006 and opt out in 2008. We do a deal in 2011 with no opt-outs because we like the benefits under the current deal and we didn’t want to give the owners an opportunity to opt out and take back the gains that we currently have. If there is no renegotiation of the collective bargaining agreement and we reach 2021, there is no uncapped year, right? Because the last time we went through it, we found out the owners lied and cheated about the uncapped year. So why would I do that again?”

Smith then went on to say that the previous opt-out didn’t give the NFLPA what it was supposed to, and instead worked in favor of owners, especially in cases where the league punished clubs (Dallas and Washington) for their spending during what was supposed to be an “uncapped year” with no spending limits, and allegedly caused other clubs to collude and keep their spending below an imaginary cap.

Those are strong comments, and while tough talk and posturing is to be expected from a union head ahead of a CBA’s expiration, there’s good reason to believe that Smith and the players he represents are ready to fight. There have been plenty of NFL/NFLPA controversies since the last CBA was signed, some over how much power league commissioner Roger Goodell has taken upon himself in the discipline process (in cases ranging from Ray Rice to Tom Brady to Elliott), but some over financial issues like the way teams spent in that uncapped year and the way team revenues are reported.

And it will be interesting to see what the TV landscape is looking like by 2021. The current broadcasting contracts don’t expire until 2021-22, but there could be changes in the works, perhaps with other players like Turner, Sinclair or tech companies getting more involved. The state of ESPN and the numbers of cord-cutters and/or streaming package subscribers out there may alter what things look like for the NFL, too. If there’s more media money coming in, there might be an extra argument on how to split it. If there’s less or a similar amount, there could still be battles to change the percentages or change what’s included in shared revenue.

In any case, there’s a lot that the NFL and the players’ association disagree on. And it’s notable that Smith and the PA are setting such a hard line here, and predicting that there will be a work stoppage. Doing so this early might work in their favor, too, especially in terms of building up more of a war chest and getting players ready for a protracted stoppage.  We’ll see if there is an actual work stoppage and if games are lost, but it’s definitely interesting that the union is expecting one.