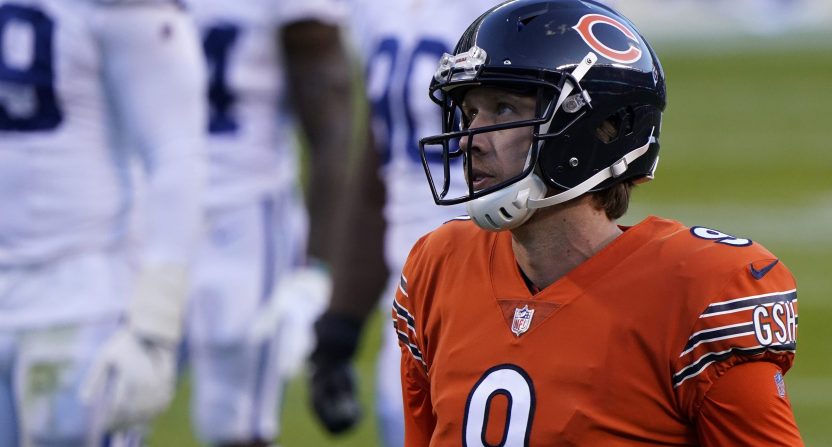 Among the NFL quarterbacks that have been on the trade block, most people discuss Baker Mayfield and Jimmy Garoppolo. However, Nick Foles has quietly been among those seeking a trade but the Chicago Bears have been unable to find a trade partner for him. After not being able to package him during the NFL Draft, the Bears released Foles on Saturday per his request.

The #Bears have agreed to release QB Nick Foles, his agent Justin Schulman confirmed. The team’s new regime decided to allow Foles to find his next home rather than continue to search for a trade partner. “Ryan Poles did the classy thing and Nick appreciates it,” Schulman said.

It’s been a tough go of things since Foles stepped into the spotlight with the Philadelphia Eagles and won the Super Bowl in the 2017 season, earning Super Bowl LII MVP honors. While he started seven games in 2020 for Chicago, he only started one last season, though it was a 25-24 road victory over the Seattle Seahawks in which he threw for 250 yards and a touchdown. However, the franchise has firmly anointed Justin Fields as its quarterback moving forward.

The 1o-year veteran was due a $4 million base salary this season but now the Bears will save $8 million against their salary cap. by releasing the 33-year-old.

While we wait to find out where Foles ends up, there were plenty of reactions to the news that his time with the Bears was over. Many people noted the irony that would come with him getting signed by the Commanders where he’d sit behind Carson Wentz once more.

It's somehow now normal for basic transaction posts like this to be worded in avant-garde ways, but I am very much enjoying the concept of "finding Nick Foles his forever home." I hope he has plenty of room to run and throw! https://t.co/P5szBmhA2r

I mean this not necessarily as a complement but why would anyone trade for Baker Mayfield when Nick Foles is available https://t.co/impsRdZCwf

Let’s get a prayer circle going to get him to the @Commanders https://t.co/RvGYrT1CMn

Let me get ahead of Eagles fans. No https://t.co/4SKFdCdOEA