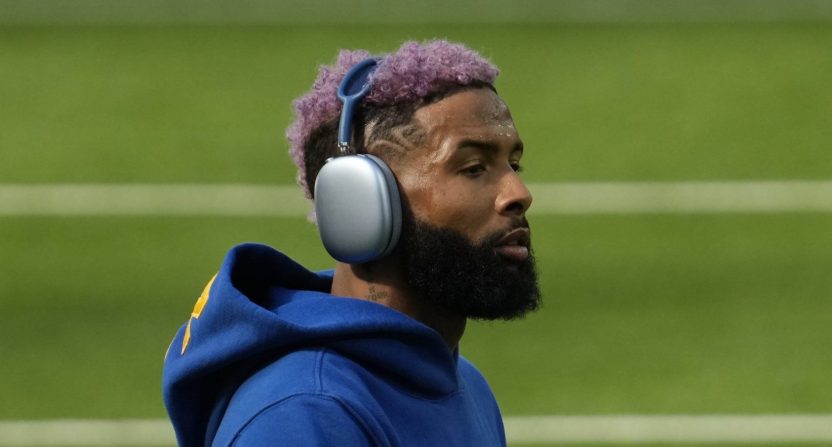 The Dallas Cowboys were able to take care of business against the New York Giants on Thursday, coming away with a 28-20 victory. While the game was surely the main priority for Cowboys owner Jerry Jones, he handled another form of business on Thanksgiving involving highly-touted free agent Odell Beckham Jr.

Jones revealed after the game that he had a conversation with Beckham on the phone as speculation continues to grow on where he may potentially sign this season.

He stayed relatively tight-lipped about the exact details of his conversation with Beckham, saying only that they had “a good meeting”.

Jerry Jones says he and Odell Beckham Jr. had a “good meeting”today. Clarified that it was not in person. https://t.co/Kg4K7O957B #CowboysNation #dallascowboys @fishsports pic.twitter.com/YUqw0DGdVc

Jones discussed the possibility of Odell Beckham Jr. joining the team in the coming weeks, saying that he could very much help this Cowboys team.

“Odell could help us,” said Jones via Charean Williams, Pro Football Talk. “I believe that right now. Now, we’ve got to make it fit and that’s the challenge here.

“I think Odell stands on his own as far as being able to be additive, and I believe that. “So we’ll approach it from that standpoint.”

Coming into Thursday’s game, it was believed that this matchup could have a profound impact on where Beckham may decide to sign, with the Giants and Cowboys both seemingly contenders to sign Beckham.

Winning that matchup may be big for the Cowboys in their recruitment of Beckham. If nothing else, it seemed to please Beckham, who posted an upbeat message as the game was nearing its end.

But Jones also added that his asking price may also play a factor.

“I think just the general how we make this fit, and all of that,” Jones added. “Availability is huge, but the financial part of it is really huge too.”