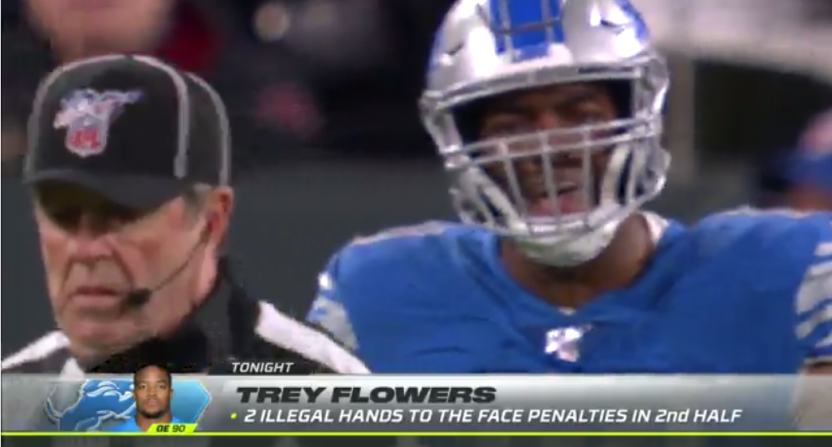 We regret to inform you that the NFL referees are at it again. Monday night’s Packers-Lions game was a highly competitive battle with big NFC and NFC North ramifications (Green Bay entered at 4-1, Detroit entered at 2-1-1), and unfortunately officiating had to get in the way in key moments down the stretch.

That ended up being good news for the Packers, at least. Green Bay came away with a 23-22 victory on a walk-off, chip-shot field goal from Mason Crosby.

Credit the Packers for erasing a 13-0 deficit, and credit Aaron Rodgers for making ridiculous throws like this 35-yard touchdown pass to Allen Lazard:

The first penalty against Flowers came when Rodgers was sacked on 3rd-and-10 at the Green Bay 44 with just over 10 minutes remaining. If the penalty had not been called, the Packers (quite likely) would’ve been punting. Instead, they were given an automatic first down, and three plays later, Rodgers made the aforementioned touchdown pass to Lazard.

With under two minutes remaining, the Packers were in in field goal range at the 16-yard line, but the Lions at least were set to get the ball back after Rodgers threw an incompletion on 3rd-and-4. But again, Flowers was called illegal hands to the face, giving — or, gifting — the Packers a first down. The Lions were out of timeouts, and the Packers were able to run the clock down to set up Crosby’s game-winning field goal as time expired.

Incredible. This is thievery. pic.twitter.com/VONyd2ZNZ6

Just about anybody watching the game had the same reaction.

🤬4 major blown calls tonight , all four went against the Lions. DB going for the INT called for Unnecessary Roughness. A non call on a blatant DPI . Then two ridiculous calls for hands to the face. Refs can’t guess and can’t get these wrong. Lions would’ve won by 2 scores @NFL

The NFL changed all its replay rules to avoid impacting games and they just handed the Packers a game.

First pic: illegal hands to the “face” penalty to keep a drive alive after a third down sack.

Hey but they’re trying their best out there. pic.twitter.com/Iecs6SzGXr

Man Trey Flowers just got taken out behind the wood shed by the officials.

That is sickening… the @NFL needs to look at a way to prevent that from happening. Two phantom hands to the face calls really hurts us tonight. Yes, we could have scored TDs, but @Lions played too well to have the game end this way. #DETvsGB @espn

And again, it’s particularly awful with this being a very meaningful game. The Lions move to last place in the NFC North with the loss, and would’ve been in first place with a win.

The NFL refs inability to get basic calls correct are literally the difference between first place and last place for the Lions.

This is unacceptable from NFL officiating, and expect a half-assed response from the league. And the Lions aren’t going to be happy with any response after they were possibly screwed out of a huge victory.