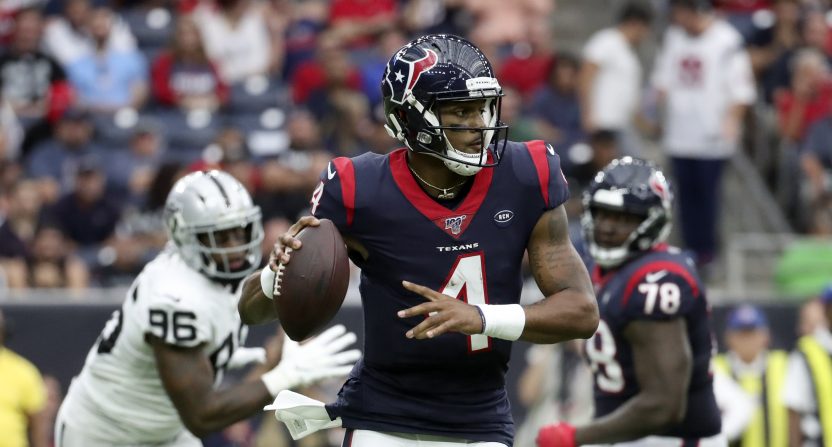 One of the biggest questions in the 2021 NFL season has been what the Houston Texans are going to do, if anything, with embattled quarterback Deshaun Watson? Watson had been demanding a trade before he was accused of sexual assault by multiple women, facing more than 20 civil lawsuits. Since then the Texans have been reportedly asking a king’s ransom for the quarterback.

That may have changed recently, as Fox’s Jay Glazer reported on Wednesday that the Texans’ stance on what they’d accept for Watson had “softened.” He then tweeted “Keep your eyes on this situation,” heavily implying that news might be imminent on the trade front.

Keep your eyes on this situation #Scoopage #NFL #Texans @NFLonFOX

While the Miami Dolphins have often been reported as the most likely trade partner for Watson, the Philadelphia Eagles have apparently entered the chat. At least, that’s according to NFL analyst Chris Simms, who told PFT’s Mike Florio that Eagles owner Jeffrey Lurie has given his staff the green light to pursue Watson.

“And you (Florio) and I both know that Philadelphia is in that mix for the Deshaun Watson thing. That’s a real thing. From everything I know, the owner has given them the green light as far as Howie Roseman and company to make that deal if it’s right. So, yes, you have to worry a little — and here’s just one other inkling. Another inkling told me they’re not sold on Jalen Hurts,” Simms said.

Florio responded by noting that Watson has a no-trade clause and a clear preference for Miami, so it might come down to whether or not the Dolphins finally make an offer the Texans would be happy with.

“I think that if Philadelphia is the only option, he’ll say yes,” said Florio. “But we’ll see.”

Of course, take Simms’ comments with a grain of salt. He’s hardly Adam Schefter or Ian Rapoport when it comes to having a reputation for breaking news. But the fact that he’d be willing to go out on a limb and say this means he certainly believes his source.

Trading for Watson would certainly be a huge slap in the face of Jalen Hurts, whom the Eagles coaching staff has backed at the face of the franchise. You’d have to imagine if they trade for Watson that Hurts would be included in the deal as he’d be pretty unlikely to want to stay in Philly. But perhaps that’s getting ahead of ourselves as the larger question might be how Eagles fans would feel about trading away important draft picks for a guy who might not even be eligible to play this season (or the future).