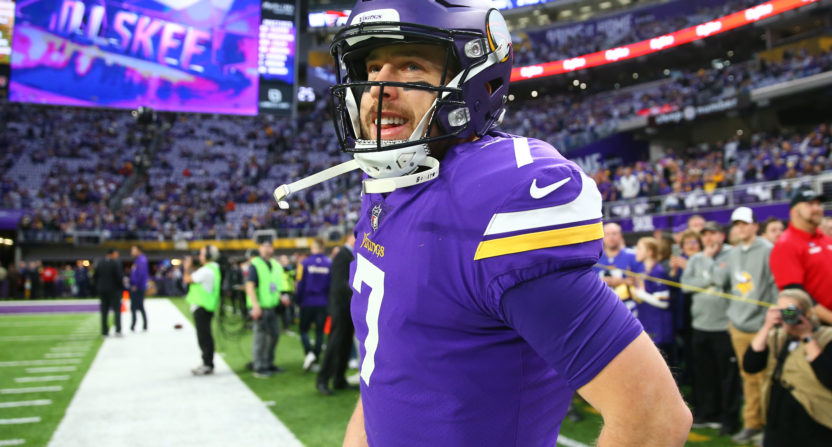 The NFL’s franchise tag deadline was on Tuesday afternoon, which passed with no surprises. Pittsburgh Steelers running back Le’Veon Bell was surely disappointed to be tagged again, in what was the notable news item from the deadline. Maybe the Los Angeles Rams deciding to franchise safety Lamarcus Joyner over receiver Sammy Watkins had a bit of buzz to it.

Soon after Tuesday’s deadline passed, we shared our ranking of the top 15 impending unrestricted free agents. Now that we know who’s available on the open market, let’s predict where each of those 15 players will land when the new league year opens on March 14.

This could be exciting because there’s going to be some movement. We see only two of the 15 staying put. Here’s how it will shake out:

QB Drew Brees: New Orleans Saints — Both sides have been pretty adamant about the fact Brees isn’t going anywhere, and there’s just no way I can see that changing. This team made a ton of progress in 2017 and has a Super Bowl window with Brees. They can afford to give him a contract that will delay major cap hits for a year or two. It’ll get done.

QB Kirk Cousins: Minnesota Vikings — Everything’s been pointing to this for some time, and the buzz now is he’ll become the first $30 million player in NFL history.

QB Case Keenum: Denver Broncos — I think the Broncos want a veteran who can do Cousins-like things. That’s Keenum, whose career might be taking off after a huge 2017 season as Minnesota’s starter. They’ll give him $20 million a year.

QB Teddy Bridgewater: New York Jets — The Jets are far away from competing, but are probably becoming impatient. I think they sign Bridgewater and have him start in front of a first- or second-round pick.

QB Sam Bradford: Arizona Cardinals — It could be Keenum in Arizona and Bradford in Denver, but my gut tells me Keenum is in higher demand and picks Denver. That leaves us with this.

G Andrew Norwell: Tampa Bay Buccaneers — They’ve got the money to spend (and Norwell will be very expensive) and need help inside. It makes too much sense.

For those who think Allen Robinson is all about size and can’t run routes, I give you Exhibit A. #Bears pic.twitter.com/vlG28tJl3E

WR Allen Robinson: San Francisco 49ers — The 49ers need weapons for Jimmy Garoppolo, and they can afford to outbid anyone on Robinson, who had 1,400 yards and 14 touchdowns a couple years ago and is still only 24.

TE Jimmy Graham: Houston Texans — C.J. Fiedorowicz is considering retirement, the Texans have the money and DeAndre Hopkins is already doing some recruiting. Makes a lot of sense for Deshaun Watson in the red zone.

QB AJ McCarron: Cleveland Browns — They tried to trade for him last year and it looks like they’re going to chase him again and then pair him with a rookie and DeShone Kizer. Not a bad strategy, as he probably has a higher ceiling than Cousins, Keenum or Bradford, and he comes cheaper with less of a long-term commitment.

DT Sheldon Richardson: Oakland Raiders — They have the money and Richardson is exactly what the Raiders need within that defensive front.

OT Nate Solder: Houston Texans — He’ll probably wind up returning to New England. But if that doesn’t happen, I’d expect him to replace Joe Thomas in Cleveland or sign with the Texans to protect Watson’s blind side.

WR Sammy Watkins: Cleveland Browns — Might as well give whoever starts at quarterback as many weapons as possible. The Browns will probably be in on Robinson, too.

I’m officially on the Justin Pugh to the Seahawks bandwagon after watching his tape against Von Miller. This snap in particular is outstanding. pic.twitter.com/UgIvXAoHpQ

G Justin Pugh: New York Giants — I think Dave Gettleman will make a run at Norwell but get outbid, and then they’ll instead bring Pugh back. He’ll be a little bit cheaper coming off playing only eight games last season.

CB Malcolm Butler: Chicago Bears — Imagining a bidding war between the Bears and Oakland for the savvy former Patriot.