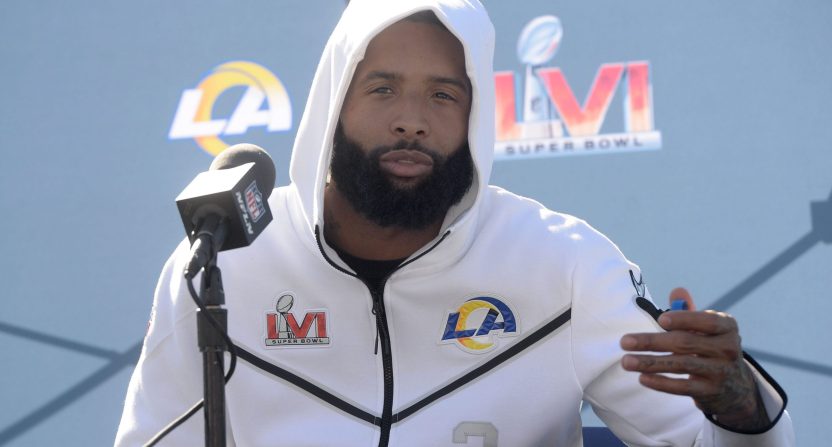 With NFL training camps and the preseason in full swing, All-Pro wideout Odell Beckham Jr. is still left without a permanent home on an NFL roster.

Although the 29-year-old free agent has maintained he’s not rushing to sign with any team, NFL Network’s Ian Rapoport reported Sunday morning that the Los Angeles Rams—the team Beckham signed with in 2021—are still reportedly interested in re-signing him for next season.

From Inside Training Camp: The #Rams have stayed in contact with FA WR Odell Beckham Jr, but what’s next? Me and Tom Pelissero discuss… pic.twitter.com/JMYMJRMVFU

Beckham (seen above at Super Bowl media day in February) scored seven touchdowns in 12 games last season for the Rams. He had a great start to Super Bowl LVI, accounting for 52 receiving yards and a touchdown —  which put him well on his way to earning the game’s MVP award, before he tore his ACL in the first half.

Rapoport adds that since Beckham isn’t expected to fully heal when the season starts, he may wait until a month or two into the year to see if a potential contender has a need for a wide receiver. Rapoport also suggested that the Buccaneers had interest in Beckham before signing Julio Jones, and that the Packers potentially are interested, too.

“He’s continued to receive interest from several teams, contending teams,” Rapoport said. “The Bucs had some interest before they ended up signing Julio Jones. I would imagine teams that were interested previously — the Green Bay Packers still need a receiver, I would expect them to be interested. And, of course, the Los Angeles Rams, his old team who have the head coach, Sean McVay, whose wedding he crashed, still have maintained interest.”

Last year, the Rams acquired OBJ after he was released from the Cleveland Browns. They had him fill in for Robert Woods, who tore his ACL during practice. With the addition of Allen Robinson, if GM Les Snead decides to pull the trigger and sign Beckham, it wouldn’t be a stretch to say that the Rams would have one of the best receiving corps in the NFL. That would certainly boost their chances at repeating as Super Bowl champs.