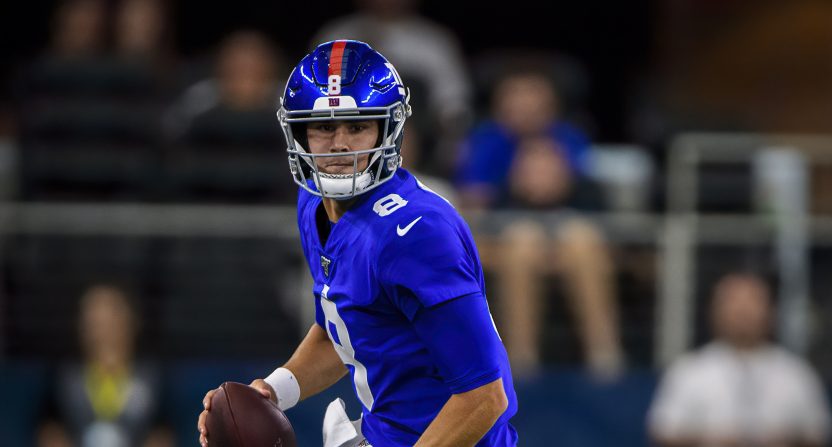 Seven quarterbacks who are currently starting for NFL teams weren’t starters only a few weeks ago. Many weren’t starters even a few days ago. Here’s how we rank the replacements when it comes to their chances to maintaining starting jobs long-term.

It doesn’t matter what Jones does this year. He could suck bad, just as Jared Goff did as a rookie in 2016. They’ve invested a No. 6 overall pick in him, and he’s the guy now as long as he’s healthy.

There’s still a chance Brissett could blow up in a bad way this season, but the Colts gave him a new $30 million contract at the start of the year. I get the feeling they suspected Luck could do this for much of the offseason, and yet they didn’t add any other veterans to the roster. Realistically, the only way Brissett loses this job is if Luck decides to come back next offseason.

3. Mason Rudolph, Pittsburgh Steelers
Replacing: Ben Roethlisberger
Reason: Big Ben is out for the year with an elbow injury
Odds he starts in 2020: 50/50

Ben looks tired and out of shape. He struggled last year and was worse to start this season. He’s flirted with retirement in the past, and Steelers head coach Mike Tomlin will only say there’s a “strong possibility” the 16-year veteran will be back for his age-38 season in 2020. And since the Steelers just sold off their 2020 first-round pick, Rudolph would almost certainly have the job in that case.

Brees will almost certainly be back this year, but there’s at least a small chance he retires at the age of 41 next offseason. If he wants to return, he’ll be the starter regardless of his or Bridgewater’s performance. But even if he does walk away, Bridgewater could have to fight off the dynamic Taysom Hill. Of course, there’s also a chance Bridgewater performs so well in the weeks to come that he earns a starting job elsewhere in 2020, but he struggled in relief of Brees in Week 2.

The rookie sixth-round pick has thus far flashed super play-making ability while putting up strong numbers. But it’s damn early and the league will likely catch up to him. Foles is absolutely the main man considering his expensive new contract, and he should be back by December. It’d be shocking if Minshew were to Wally Pipp Foles, but it’s also not completely out of the question. Plus, Foles is pretty injury-prone.

It’s entirely possible the Panthers part ways with Newton soon. Unlikely, but possible. They owe him basically no guaranteed money beyond this season, and they could become fed up. Crazier developments take place in this league every year. And Allen has performed pretty well at times in spot duty. That said, the Panthers used a third-round pick in the 2019 draft on Will Grier for a reason, and they’d likely prefer to see him take over for Newton. Allen would have to play out of his mind to make this happen.

Darnold’s the dude for at least two more years. They used a No. 3 overall pick on him. Falk was solid in relief of Siemian in Week 2, so there’s always a chance he suddenly becomes a stud this season, but it’s really hard to imagine the second-year sixth-round pick supplanting Darnold in one season.