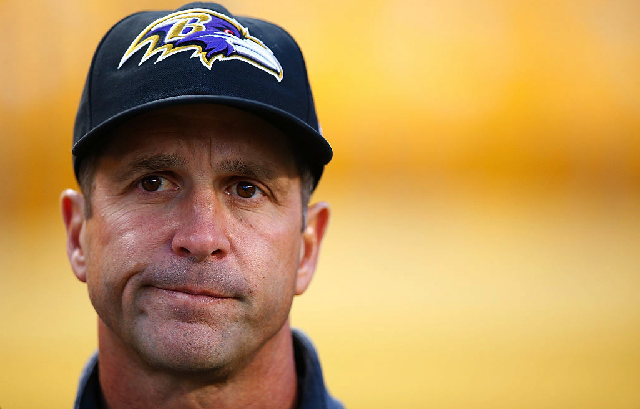 The NFL offseason can be long and dry at times. There aren’t a lot of big free agents or transactions like in MLB, the NBA and the NHL, and there aren’t massive trades like MLB teams configure every couple days. To pass the time, one New England news service decided to make an interesting ranking.

Back in July, MassLive.com published its list of the “25 Biggest Villains in Patriots History.” The top five in order were:

That’s a pretty solid five and the MassLive team made a great case for each of them to be in the top five.

Far outside the top five, down at number 19, is Baltimore Ravens head coach John Harbaugh. Here’s the description MassLive gave of Harbaugh and the reason for ranking him No. 19, one spot behind Ray Lewis at 18.

Greatest act of villainy: Not knowing the rulebook (and a role in Deflategate?)

Harbaugh’s had a lot of success as head coach of the Baltimore Ravens, and has had his playoff run-ins with the Patriots. The most notable of those came during the 2014 playoffs, when the Patriots ran out a controversial scheme that employed four offensive linemen to confuse the defense. Harbaugh spent much of the rest of the game (and since) complaining about the legality of the offense — which has since been banned.

Harbaugh is also believed to be one of the parties that tipped off the Colts about the idea that the Patriots were deflating game balls, but he has denied those rumors.

After hearing about his ranking, the ensuing description and reasoning as to why he placed 19th, Harbaugh was a little disappointed.

“There was a thing that just came out that I happened to catch, the 25 worst villains of the Patriots,” Harbaugh said of the MassLive.com ranking. “I think I was like 20th or 21st [19th]. I think that’s a little low. I plan on making that higher in the future.”

That’s a bold statement from Coach Harbaugh. However, number 19 is pretty low. It’s kind of like if Zack Snyder was deciding which villain to put against the Justice League and settled on Mr. Mxyzptlk. That’s how far down the list he is.

Think about it, can you name 19 different villains that have appeared in a Superman, Batman, Iron Man, or any other superhero movie franchise? Probably not.

Back to football, Harbaugh’s first opportunity to leap over Lewis and maybe into the low teens will be on Dec. 12 when the Patriots host the Ravens on Monday Night Football.

After that, if the Ravens need to bounce back from a rough year on the field and the Patriots stay consistent without Tom Brady, maybe there will be a playoff matchup between the teams and Harbaugh can potentially move up the list of biggest Patriots villains.

On the flip side, it’s probably safe to say both Bill Belichick and Brady are probably in the top five, if not numbers one and two, on most of the other 31 NFL team’s top villains rankings.