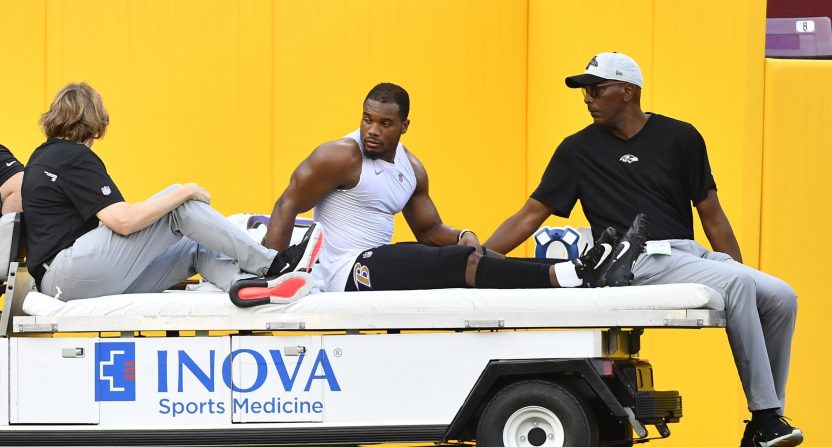 Baltimore Ravens running back J.K. Dobbins was taken to the locker room on a cart after suffering a knee injury in the first quarter of Saturday night’s preseason game against the Washington Football Team.

Dobbins took a hit to the knee on a screen pass and his left knee bent backward. He was down on the ground in serious pain before being helped off the field, unable to put weight on the leg.

Forceful hyperextension. MRI will tell us the story. Until then, we hope ligaments are spared 🙏🏻 pic.twitter.com/Da321F2U16

Uh oh! JK Dobbins down and at first sight it appears to be serious 😳 pic.twitter.com/9Xe3xy4GSX

JK Dobbins carried into the medical tent, putting no weight on left knee which was bent backwards on a tackle on a screen pass.

Ravens RB J.K. Dobbins is out of the blue medical tent and appears to be going on a cart to locker room. Several Ravens offensive players are going over to to see him.

So, that certainly has the look of a potentially serious knee injury, and that would be devastating for Dobbins and the Ravens.

Dobbins was selected by Baltimore in the second round (55th overall) of the 2020 NFL Draft after starring at Ohio State. He proceeded to run for 805 yards over 134 carries (averaging a fantastic 6.0 yards per carry) with nine touchdowns in his rookie season, and added 18 receptions for 120 yards.

The 22-year-old was set to be the Ravens’ primary ball-carrier in 2021. If this injury ends up being serious (and even if it’s not a season-ender, it would seem likely to keep Dobbins out for some time, at least) Gus Edwards is likely to be the Ravens’ No. 1 running back, and they’d surely be on the hunt for more help at the position. This could all have major fantasy football ramifications as well.

Gus Edwards would be a top-20 fantasy RB if Dobbins misses the season and the Ravens don't add a RB. Main thing that was holding Dobbins/Edwards in fantasy football back was each other.

I think RB14 is around where Edwards ends up if Dobbins went on IR and the Ravens didn't invest too much in another RB. If they use a draft pick to trade for one, or sign someone for more than the minimum, would still only fall to around RB18

If the injury proves serious — multi-week variety — Gus Edwards is unquestionably a top-20 RB. Ravens will no doubt be in the market for a veteran rusher after cutdowns.

This is unfortunately another example of why teams should be very careful with playing time for meaningful players in the preseason, and especially when it comes to the running back position.

UPDATE: An MRI revealed that JK Dobbins tore his ACL, according to ESPN’s Adam Schefter. Absolutely awful news for Dobbins and the Ravens.

An MRI today confirmed that Ravens’ RB J.K. Dobbins, one of the top young running backs in the game, suffered a season-ending torn ACL, per source.