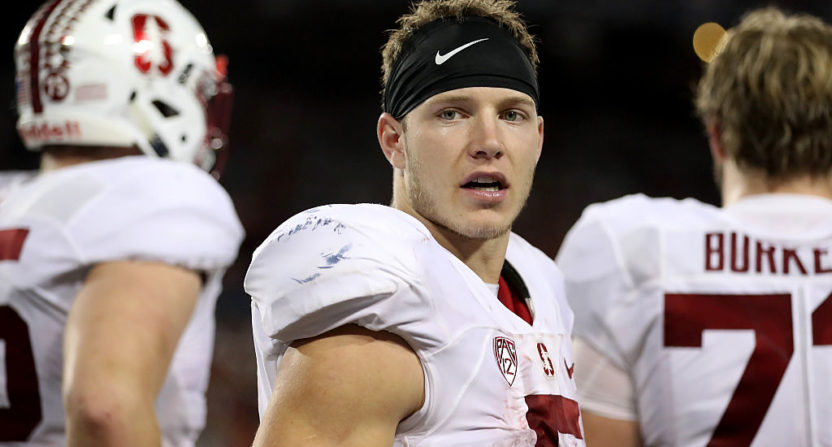 Carolina Panthers rookie running back Christian McCaffrey left Stanford a year early to pursue his NFL dream and is no longer a student at Stanford. Though he no longer has an official tie to the school, one of the most absurd rules in the NFL rulebook is blocking him from getting a start with the Panthers this offseason.

The rule in question states no rookie may join an NFL team for offseason practices until after the rookie’s school completes its spring semester. The rule is designed to discourage players from dropping out of school before getting to the NFL, but that is just simply not likely to happen in an age where players sit out of bowl games in order to focus on their NFL future.

Stanford’s current semester does not end until June 14, which means McCaffrey must sit on the sidelines from afar and stay in shape on his own while learning the playbook and being quizzed on the phone by head coach Ron Rivera.

“It sucks, it’s really tough,” McCaffrey said on the Panthers’ website.  “You can still get the plays down and get good training when you’re home, but nothing will ever compete with actually getting the reps on the field, being with the guys.”

McCaffrey will be able to participate in two days of the current offseason workouts with the Panthers, but then he will have to wait until training camp to get back on a practice field with the Panthers.

“I just think if a young man on his own is not going to enroll, don’t hold that against him,” Rivera told reporters after practice on Monday. “You don’t know who you’re going to get through the draft. If those young men decided on their own, then they’re being punished for something that is their choice.”

McCaffrey may be a rare example of how this NFL rule can be a hindrance, and in the long run it may not matter much. But still, this is nutty.

This seems like a silly rule the NFL can and should modify or scrap. The rule may be well-intentioned, but the times have changed since it was put into place. There is no punishment for players leaving school early from the NFL, and the league is merely holding some of their rookies back from developing for the league’s well-being.