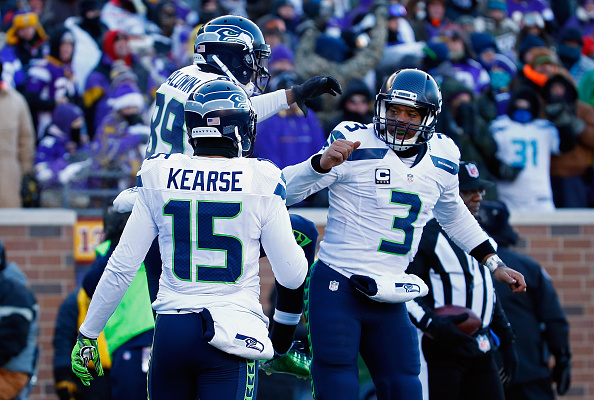 The cold weather was expected to be a factor on Sunday at TCF Bank Stadium in Minnesota. Sure enough, it was, as both defenses dominated the NFC Wild Card Playoff game between the Seattle Seahawks and Minnesota Vikings. In the end, it was the two-time defending NFC Champion Seahawks who prevailed 10-9 thanks to a fourth quarter fumble from Adrian Peterson and a soul-crushing missed potential game-winning field goal by Vikings kicker Blair Walsh.

The first half of the game was a snoozer, as the teams combined for five punts, two turnovers on downs, one field goal, and the half-ending kneel down from Teddy Bridgewater. The Vikings actually moved the ball pretty well on the Seahawks on the opening drive of the game, eating up 7:05 of clock and advancing to the Seattle 45 yard line before punting. Seattle took over, went three and out, and Jon Ryan fumbled the snap on the forthcoming punt, scrambling shy of the first down marker and granting Minnesota some good field position.

That one looks like it left a mark, Jon Ryan… https://t.co/BGyI6o42yZ

The Vikings would move the ball inside the five and settle for a field goal in what would turn out to be their first of two red zone appearances on the day.

Following the field goal, Seattle moved the ball into Minnesota’s half of the field twice to close out the first half, coming away with zero points between the two positions.

To start the second half, the Seahawks offense once again began to move the ball, but Wilson was picked off on fourth and three from the Vikings 40. The Vikings cashed in with a field goal to make it 6-0 thanks to a roughing the passer call on Cliff Avril. After another three and out by Seattle, Walsh notched his third field goal of the day for the Vikings thanks in large part to a horse collar tackle by Derrick Coleman on the punt return and a defensive pass interference penalty on Richard Sherman that took the Vikings from what would have been third and seven to first and ten.

But then, Russell Wilson’s fourth quarter magic reared its head on the next Seahawks drive. After a 14-yard pass from Wilson to Christine Michael on third and two, Wilson fumbled the snap at midfield and looked to be in rough position. However, he heaved the ball down the field into the arms of Tyler Lockett, who made his way down to the Vikings’ four-yard line. Two plays later, Wilson found Doug Baldwin for a three-yard touchdown, making it a 9-7 game.

Disaster turns into a massive gain, of course https://t.co/CSKog96nQ2

And then, an honest to goodness touchdown! https://t.co/B8KTXc0TLM

Disaster struck for the Vikings on their next possession as Adrian Peterson, held in check for most of the day by the Seahawks, fumbled after an eight yard gain. The Seahawks took over at the Minnesota 40, and eventually took the lead following a 46-yard field goal by Steven Hauschka.

And until the final drive of the game, neither team could move the ball well, trading four punts before Minnesota made their final push. Minnesota started off at their own 39, and moved into Seahawks territory thanks to a defensive pass interference penalty on Kam Chancellor. Bridgewater followed up with a 24-yard completion to Kyle Rudolph, and Peterson was fed the ball three straight times to set Walsh up for the game-winning 27-yard field goal.

He shanked the hell out of it.

What a shank to end it… https://t.co/YkpNPJ03IG

Wilson finished his day by going 13/26 for 142 yards, one touchdown, and one interception, while Bridgewater didn’t either score or turn the ball over, completing 17 of 24 passes for 146 yards. Peterson was a non-factor for the Vikings, tallying just 45 yards on 23 carries. The two teams combined for just 27 first downs and 409 yards of offense on the day.

Next up for the Seahawks – the Carolina Panthers, the top seed in the NFC. The Panthers beat the Seahawks 27-23 in Week 5 in Seattle.