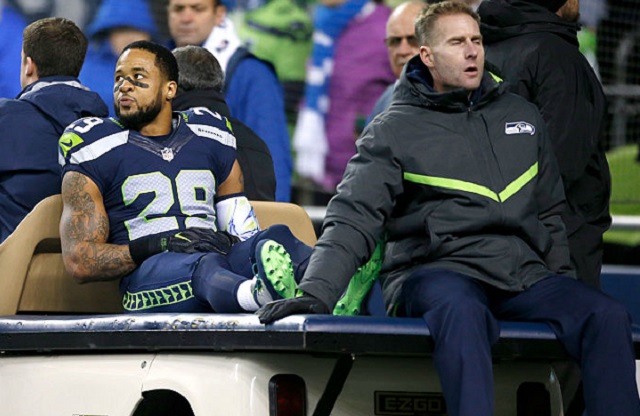 For the entire Seattle Seahawks run of success under head coach Pete Carroll, safety Earl Thomas has been the backbone of one of the NFL’s most dangerous defensive units.

The presence of Thomas has led to a Super Bowl win and two NFC Championships over the safety’s six-plus seasons in Seattle, but all of that success came to a halt on Sunday Night Football against the Carolina Panthers. Thomas, who had played in 118 consecutive games before he sat out last week against Tampa Bay with a hamstring injury, suffered a broken bone in his lower left leg that will likely end his season in early December.

Being injured is an unknown world for Thomas, a player known for his durability and fortunate health during his tenure with the Seahawks as the back-end of the Legion of Boom defense. Now for the first time in his career, Thomas is headed for a lengthy rehab from an injury that will take months to recover from. The break in Thomas’ leg is serious enough that the safety tweeted during the Seahawks-Panthers game from the locker room that he had thoughts of retirement in the immediate aftermath of his first serious injury.

This game has been so good to me no regrets.. A lot is running through my mind including retirement thanks for all the prayers.

Mentioning retirement at the age of 27 with seven NFL seasons on his résumé, Thomas’ tweet expectedly raised eyebrows after making it clear how serious he considered his injury to be. The Seahawks now are in limbo for the interim with one of the best defenses of the 2000s now left without one of their leaders and a future Hall of Fame level talent for the rest of the season.

“You can’t make up for it. You just try to find someone who can do half of what [Thomas] does. It’s hard to replace a great player, a Hall of Fame-type player. You can’t replace those, you’ve got to fit it where you fit in,” defensive end Michael Bennett said following Seattle’s 40-7 victory, per USA Today.

Richard Sherman and Kam Chancellor, two of Thomas’ running mates in the Legion of Boom secondary, weighed in on the possibility of Thomas retiring. Chancellor leaned toward the side of letting his teammate go through the injury process without any speculation, while Sherman added that most players think about retirement on a weekly basis due to the physical nature of the NFL and the toll paid each Sunday.

Richard Sherman on Earl Thomas’ retirement tweet: "I think all of us consider retirement just about every game…"

“When you get injured, it becomes very emotional. Sometimes you say things you might not mean. Sometimes you say things you might mean,” Chancellor said to USA Today‘s Lindsay H. Jones. “It’s one of those things you just have to let him sit back and breathe. Let him go through his process. People are going to take it how they’re going to take it. At the end of the day, he’s going to make the decision he wants to make, but right now it’s an emotional battle.”

Thomas and the Seahawks will focus on his recovery for 2017 and beyond, trying to get their leader back in the proper mindset to continue his storied career. It would be unlikely to see a 27-year-old Thomas retire in his prime, especially with the Seahawks still in the mix as a Super Bowl contender year after year. But the more immediate concern is how the Seahawks can continue to remain as favorites in the NFC without one of the key cogs to their dominant defense, looking ahead to a potential NFC Championship Game tilt with the high-powered Dallas Cowboys offense.

The chances of a second Super Bowl title are obviously significantly lower with Thomas out for the rest of the season. The Seattle defense still has many of the pieces from its recent playoff runs in place, including Chancellor at safety alongside replacement Steven Terrell. However, there is a reason why the Seahawks have been consistent for so long and a big part of their success has been the health of their key players over the course of multiple seasons. Now, the Seahawks will be tested with what may be the biggest injury absence they’ve faced during Carroll’s tenure.

The good news for the Seahawks is that their final four games come against teams with a record of .500 or lower. That should give Carroll and the Seattle defensive coaching staff plenty of time to get Terrell up to speed and devise any type of scheme that can make up for Thomas’ absence. The Seahawks do have enough All-Pro talent to make a good effort at moving on without Thomas despite Michael Bennett’s respectful concern over replacing a player so valuable to the defense. Finding ways to hide Terrell, most likely through a further reliance on Chancellor at the opposite safety, will be crucial to the Seahawks’ chances of winning a title without the heart and soul of the secondary.