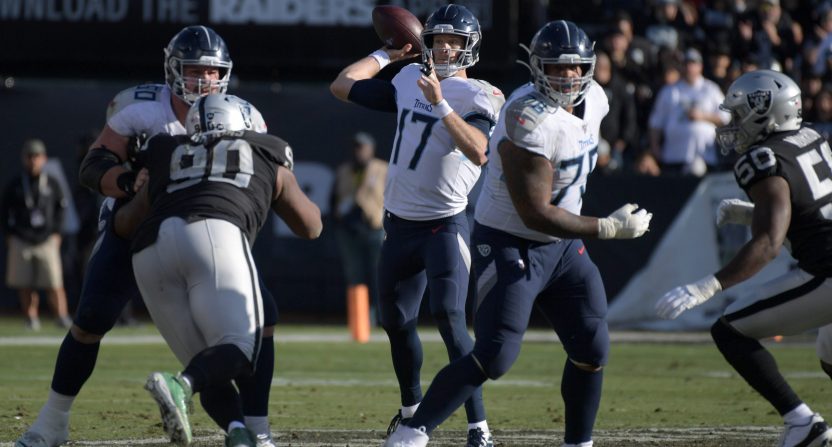 The Tennessee Titans  outscored the Oakland Raiders 21-0 in the second half to come away with a 42-21 win on Sunday at the RingCentral Coliseum. Tennessee has now won four straight games, and six of their last seven. They’ve gone from a 2-4 team to an 8-5 team that’s tied for first place in the AFC South with the Houston Texans.

What changed? Well, along with Derrick Henry running like his hair is on fire, the quarterback play has seen massive improvement since the Titans switched from Marcus Mariota to Ryan Tannehill as the starter in Week 7.

Since naming Ryan Tannehill the starting QB in Week 7, the Titans have the 2nd-most offensive TDs and are scoring the 2nd-most PPG (31.4) in the NFL over that span. pic.twitter.com/1rbm9WrljB

On Sunday, Tannehill completed 21-of-27 passes for 391 yards, three touchdowns, one interception, and a 140.4 passer rating.

Ryan Tannehill joined Aaron Rodgers as the only players to complete at least 75% of their passes with a passer rating of 130 or higher (minimum 10 attempts) in three consecutive games in a single season in NFL history.

There are now only two players in NFL history with 4 consecutive games with at least 2 passing TDs and a passer rating of 125+ in NFL history.

Tannehill even made an incredible play on his interception.

Tannehill has now thrown for 15 touchdowns, five interceptions, and a 118.5 passer rating (No. 1 in the NFL) in nine games (seven starts) this season. He’s averaging a ridiculous 9.9 yards per attempt, which is far and away the best mark in the league. That tells us that not only has he been extremely efficient, but he’s throwing downfield for explosive plays.

The 31-year-old was a starting quarterback for the Miami Dolphins from 2012-18 after being the eighth overall pick in the 2012 NFL Draft. He’s put together a fairly productive NFL career and has always been a starting-worthy quarterback, with a decent 88.0 passer rating in 88 career games with Miami (all starts). The talent has always been there and with flashes of brilliance shown, just not consistently.

With the Titans, Tannehill looks much more confident and in control (both in and outside of the pocket), and is consistently playing at a high level so far. He’s making all the throws from the pocket, and he’s using his underrated mobility when necessary to extend plays, create throwing lanes, and pick up yards on the ground (and keep the defense honest with this threat).

Now, is Tannehill really this good? Well, it’s quite unlikely he continues this 9.9 yards per attempt, 118.5 passer rating stuff for too long… or else he has all of a sudden become the best quarterback on the planet.

But things are clicking for Tannehill with the Titans so far, and he really does look legitimately *good*. The video game numbers he’s putting up may be a bit fluky, but he absolutely does look like the Titans’ answer at starting quarterback for 2019 and beyond. He has turned the Titans into a potential division title winner, and a team that could be very dangerous come January.