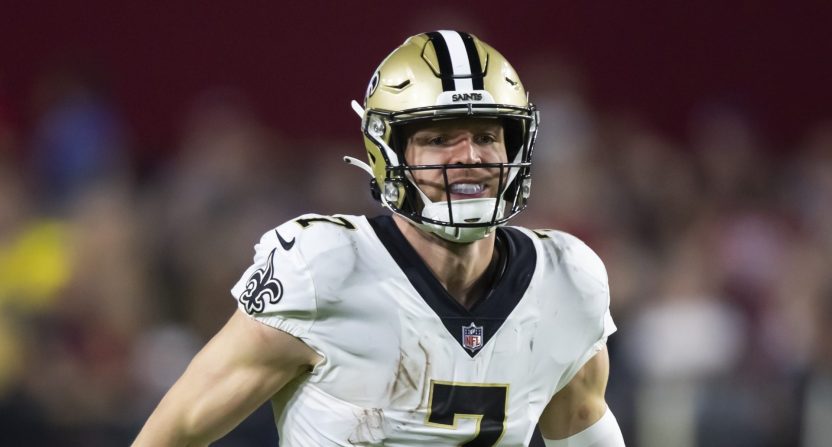 While Taysom Hill is listed as a tight end on the New Orleans Saints depth chart, we frequently see him line up as a quarterback, running back or receiver, as well. During Monday’s Week 13 game against the Tampa Bay Buccaneers, Hill’s jack-of-all-trades nature was spotlighted again as he accomplished something that hasn’t been done in the NFL in nearly 60 years.

Hill caught a second-quarter touchdown pass from Andy Dalton, the only one scored by either team in the first half on Monday night. That was the ninth receiving touchdown of his career.

Andy Dalton to Taysom Hill for a 30-yard touchdown!

With that, Hill became one of only six players in NFL history to have nine career passing, rushing and receiving touchdowns, something that nobody has done since Frank Gifford in 1964.

He's 1 of 6 players all-time to have at least 9 Pass, Rush and Rec TDs in their careers, most recently achieved by Frank Gifford in 1964. pic.twitter.com/oDY4Ubfapn

The evolution of football has brought more of a firm definition to the roles of quarterbacks, running backs and receivers/tight ends. For the most part, if a quarterback is running a route and catching a pass, it’s a trick play.

Hill is a throwback player. His Swiss Army Knife game would have been really well suited for long bygone eras of NFL history. But while he may not be a superstar player in this era, he’s consistently shown that he can be a contributor.