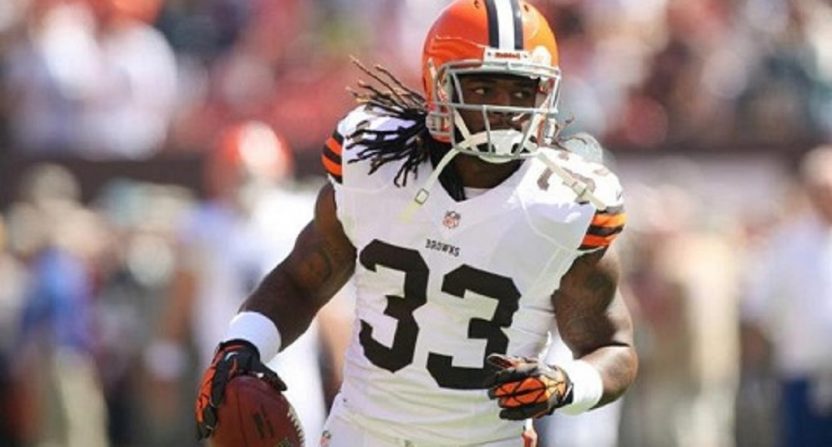 The NFL Draft is a crapshoot. The success rate on first-round picks is basically a coin flip. Keep that in mind when you watch on Thursday night.

Here are the worst No.1 picks over the past decade:

It’s probably unfair to call him a bust. Because of his chronic injuries, we’ll probably never know how good White could have been. The 2015 draft was supposed to have some good wide receivers and six were taken in the first round (Amari Cooper, White, DeVante Parker, Nelson Agholor, Breshad Perriman and Phillip Dorsett). White had as much potential as all of them. Mike Huguenin of NFL.com wrote: “almost all agree he has the biggest upside among the receivers. He isn’t as polished as Alabama’s Amari Cooper, but White is two inches taller and a bit faster.”

Chicago never got to find out. White missed his entire rookie season due to a stress fracture. He started four games in his second year but was largely ineffective (19 catches for 187 yards) before sustaining another season-ending leg injury. The next year, he was limited to one game due to a left shoulder blade injury. Last season – his final in Chicago, White appeared in nine games (four catches 92 yards). Last month, White signed a free-agent contract with Arizona. As terrible as his career has been, White almost made one of the greatest plays of the 2018 NFL season. He came close to stunning the Patriots with a Hail Mary catch.

Perhaps new Bengals coach Zac Taylor will unlock John Ross’s potential. Ross is young but he is quickly running out of chances. Based on what we know now, Ross has been a colossal bust.

Ross skyrocketed up draft charts after his blazing performance at the 2017 NFL scouting combine. He ran the 40-yard dash in 4.22 seconds, breaking the record of 4.24 set by former Tennessee Titans’ running back Chris Johnson in 2008. The Bengals thought Ross’ speed would be a great complement to game-breaking wide receiver A.J. Green. However, Ross’ career got off to a bad start under coach Marvin Lewis. He played only three games and didn’t record a catch. Last season, Ross finally saw game action but put together the most perplexing stat line you’ll see by a wideout (21 catches for 210 yards, 7 TDs). In February, there were reports that the Bengals are looking to trade Ross. However, the team denied they are shopping him.

The Buffalo Bills have been searching for a franchise quarterback since Jim Kelly retired. Since 1996, no starting quarterback has lasted longer than four seasons. They’ve used three No.1 picks on quarterbacks (J.P. Losman in 2004, EJ Manuel and Josh Allen last year). The 2013 draft wasn’t deep at quarterback and Manuel was the only passer taken in the first round. Manuel got high marks for his toughness and arm strength. After the draft, one writer predicted that Manuel would be “the best pick of the 2013 draft.”

However, Manual became the latest Florida State quarterback to underperform in the pros. And the 2013 draft class would go down as one of the worst ever. Manuel had an inconsistent rookie season (11 TDs, 9 INTs in 10 games). He also missed time with a knee injury. The next year, he started the first four games but was benched. Maybe the Bills should have listened to Manuel’s college coach. ESPN’s Adam Schefter reported that Florida State’s Jimbo Fisher told teams “He was adamant throughout the pre-draft evaluation process that he didn’t believe Manuel had the tools to be an NFL starter and he shouldn’t be any better than a third-round pick.”

When you’re best known for a dropped pass, you’ve had a rough career. Coleman’s failed catch that went through his hands on fourth down in the 2017 regular-season finale against the Pittsburgh Steelers cliched the Brown’s 0-16 season. Coleman said: “It’ll last forever.” Coleman was just a second-year player, but he hasn’t done much to make anyone forget that drop.

Coleman came into the draft with a reputation for speed. He ran a 4.37 40-yard time to cement his status as a top prospect. His talent led one anonymous wide receivers coach to say “He’s my top receiver. Now this is for what we do so he’s going to be tops for me. He can do a lot of things.” Coleman got off to a promising start. In his second game, he had five catches for 104 yards and two scores against Baltimore. It remains the only 100-yard game of his career. Coleman’s drops and legal issues caused the Browns to give up on him after two seasons, trading him to the Buffalo Bills in August 2018. After being cut, he was picked up by the New York Giants.

Surprised he’s not higher? He would be if he were taken closer to the top of the draft. Manziel was not a consensus first-round choice. And if the Browns were more confident in him, they would have picked him earlier. There were questions surrounding Manziel due to his size (barely 6 feet), his improvisational style and his attitude. Manziel became the first freshman to win the Heisman Trophy largely because he beat Alabama. He certainly was electric, and the Cleveland Browns fell in love with him, trading up four spots to pick him. Blame the homeless guy who reportedly told owner Jimmy Haslam to draft Manziel.

Cleveland cut Manziel after just two seasons and various off-the-field troubles. He played quarterback the way he lived his life: undisciplined. Since then Manziel has floundered around in other leagues, including being kicked out of the CFL a few months ago. Interestingly, Manziel came close to being drafted by the Cowboys at No.16. They instead chose Notre Dame offensive lineman Zack Martin who is a five-time All-Pro guard.

When the New York Jets reached back-to-back AFC title games in Rex Ryan’s first two seasons, they did so behind a great defense and great cornerback play. Future Hall of Famer Darrelle Revis is perhaps the greatest Jet of all time. When the team traded him away due to a contract dispute in 2013, they needed a replacement. To fill the void, New York drafted Dee Milliner to be the new shutdown corner.

The two top rated cornerbacks in the draft were Milliner and Xavier Rhodes from Florida State. Milliner was rated higher because of his man-to-man skills (He led Division I with 22 passes defended). Well, Rhodes – picked No. 25th overall, is a two-time Pro Bowler for the Minnesota Vikings. Milliner was awful his rookie season, getting benched multiple times by Rex Ryan. The low point of his 3-year career with the Jets might have been when he was torched for an 80-yard TD by Green Bay Packers’ wideout Jordy Nelson. Milliner battled injuries but even when reasonably healthy, it was clear that he wasn’t a starter let alone a star.

ESPN draft guru Mel Kiper Jr. predicted in April 2010 that Locker would be the No.1 overall pick of the 2011 draft. Kiper said: “I would say it’s etched in stone it’s going to be Jake Locker. You can mark that down. Jake Locker, if he’s not the number one pick, it’s an upset.” Locker could have declared early but surprised some by returning for his senior. His decision originally looked like a mistake because Locker had a disappointing final year. His raw talent (athleticism and arm strength) didn’t translate into greatest statistics. He suffered an embarrassing loss to Nebraska in which he completed just four passes.

Tennessee Titans needed a quarterback after Vince Young failed to live up to expectations. They took a chance on Locker who was the second overall QB selected in that draft behind No.1 overall pick Cam Newton. While Newton was terrific from the start, Locker’s pro career was unremarkable. In his second season, he started 11 games and threw 10 TDs to 11 INTs. He would start only 12 games over the next two seasons before retiring in 2015.

Justin Gilbert was supposed to be a defensive star NFL teams salivate over. Some compared him to Champ Bailey. Gilbert compared himself to Deion Sanders, arguably the greatest coverage cornerback of all time. He had good size (6 feet) and speed (4.3 in the 40-yard dash). As an added bonus, he was stellar on special teams, setting the Big 12 record for career kickoff returns for TDs with six. Cleveland didn’t have a huge need at cornerback, but the Browns drafted a guy who they thought was the best player available. Surely, teaming Gilbert alongside Pro Bowler Joe Haden would give them the best young cornerback tandem in the league.

That didn’t happen. Gilbert started three games in his two-year Cleveland career. He displayed none of the playmaking abilities that he showed in college. His own teammate, Donte Whitner, blasted Gilbert saying of the rookie “It’s time to grow up and not be a kid anymore.” Cleveland traded Gilbert to Pittsburgh where he played one more season before being suspended for violating the league’s substance abuse policy.

Pass-rushers are always at a premium. And when you play in the same division as Tom Brady, you better get someone who can disrupt his rhythm. Miami thought they had that guy when they traded up to snag Jordan. He was considered the premiere pass-rushing prospect. He was compared to DeMarcus Ware, the eighth all-time leading sacker. Jordan, 6-foot-6, 248 pounds, impressed with versatility. He could play either defensive end or outside linebacker. He was a workout warrior, leading Sport Science analyst John Brenkus to say “Jordan is one of the most agile pass rushers we’ve ever analyzed.”

Instead, Jordan turned into a cautionary tale. For all his amazing physical gifts, where was the production? He had only 14.5 sacks in his college career. In the NFL, Jordan didn’t produce either. As a rookie, he collected two sacks. The next season, he started one game and was suspended for the end of 2014 and all of 2015 for substance abuse violations. Jordan spent the past two seasons with Seattle.

ESPN analyst Ryan Clark once called Trent Richardson the worst running back of all-time. Richardson’s failure affected two teams and stained the position in subsequent drafts. He was such an epic bust that it caused teams to shy away from picking running backs in the first round. There was a two-year drought until the Rams selected Todd Gurley 10th overall in 2015.

Richardson was horrifically bad for Indianapolis. In 29 games, he averaged 3.1 yards per carry and scored 6 TDs. The Richardson experience included fumbling on his first career playoff carry again Kansas City. The following season his stint with the Colts ended with him being suspended for Indianapolis’ final two playoffs games. Richardson got another shot with the Oakland Raiders in 2015 but was released before the start of the season.