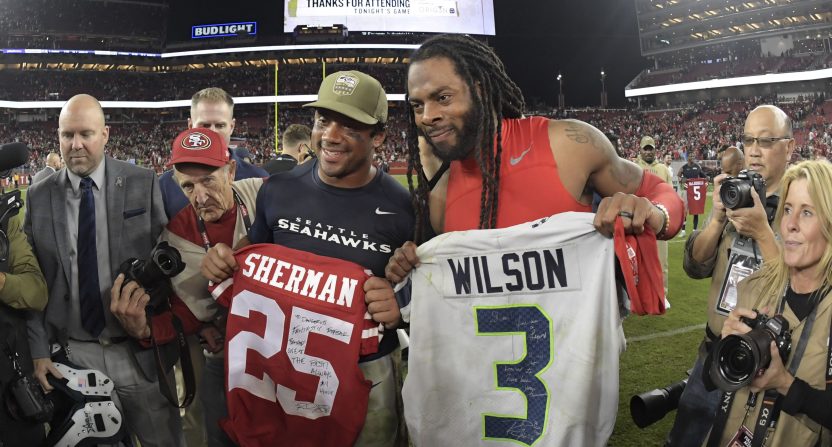 Thursday night’s prime-time divisional matchup between the Indianapolis Colts and Houston Texans excluded, there are 93 games remaining in the 2019 NFL regular season. Here are the top dozen to watch between now and Sunday, December 29.

The Colts will likely be fighting for the AFC South title, while the Saints will probably be trying to secure a first-round bye. It’s a fun cross-conference matchup between two of the deepest and most well-balanced teams in the NFL.

Oakland and Kansas City are likely to be tied for the AFC West lead here, and the Raiders are an interesting team this season. This could be a statement game for the Raiders, especially with the Chiefs forced to play New England one week later.

Russell Wilson is an MVP frontrunner, and in this case he’ll be going up against a desperate, mentally strong, well-coached team on the road. It’s a critical matchup between two big-time teams jockeying for playoff positioning in the NFC, and potentially a hell of a quarterback battle.

Both extremely popular teams are trying to prove their records aren’t inflated by the fact they’ve been bullying bad teams. The winner — especially if it’s Dallas — will be viewed as a prime Super Bowl contender. The loser will take a lot of heat.

How do you not have a ball watching Deshaun Watson? That matchup with the AFC’s best defense should be stellar. And there are big playoff stakes here as well, of course.

They scored a combined 83 points in an unforgettable battle last year, and both teams are much more desperate considering their struggles of late in 2019. This game could put New England over the top in the AFC, or it could give the Chiefs a shot to topple the Pats for that No. 1 seed.

The Packers and Vikings are likely to fight out the NFC North until the bitter end, and this meeting in the penultimate week of the regular season could decide who takes that division. There are always fireworks when these two meet.

Right now, the Packers and 49ers are both positioned for first-round byes in the NFC. This is also a battle between unstoppable force and immovable object, and it should go down to the wire. The winner will become the Super Bowl favorite in the NFC.

San Francisco and Baltimore lead most power rankings right now, and this might actually be Lamar Jackson’s biggest challenge yet. The winner of this Super Bowl XLVII rematch might immediately be considered the favorite to win Super Bowl LIV.

But there’s a little more on the line here because it’s an intra-conference battle, and because the 49ers might be trying to hold on for dear life after the two games listed above. The Superdome will be deafening for a game that could also decide who the Super Bowl fave is.

There’s a chance that the winner of this game secures the top seed in the NFC, or at least a first-round bye. Meanwhile, the loser will likely have to settle for a wild-card spot. The first meeting between the two was an instant classic, and there’s little reason to believe this won’t be just as awesome. We just have to hope the stakes hold up for Week 17.