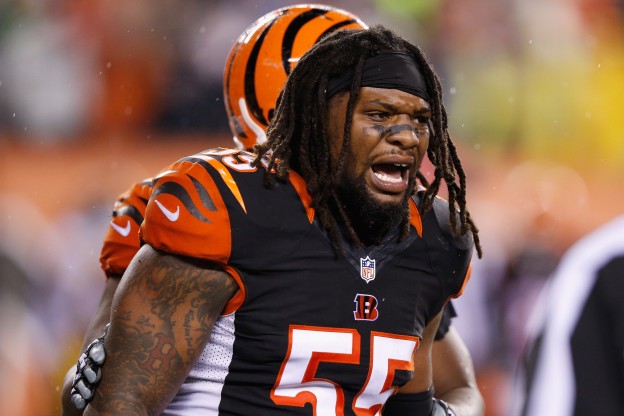 The Cincinnati Bengals had to live with a black mark, the NFL’s scarlet letter, for a very long time.

Most of the players in the organization worked hard — and succeeded — in creating a new identity for this NFL franchise, which hasn’t missed the playoffs since the 2010 season.

Saturday night, the two bad apples in the bunch brought all the familiar labels rushing back to the surface of memory.

In two brain-dead moments just seconds apart, a season of good work and a remarkable comeback by A.J. McCarron were thrown into the garbage pile. The Cincinnati Bengals’ thuggish past returned in full and violent color.

That loss of self-control, revived at the worst possible moment, cost coach Marvin Lewis yet another playoff game. The hated Pittsburgh Steelers walked out of Cincinnati with a victory and a ticket to Denver next week.

Bengal fans were shattered in January yet again, but never in such an embarrassing way, never with such naked recklessness from their players:

Over the past few seasons, the Bengals might not have been artistic. They might have absorbed one bad Andy Dalton playoff performance after another. They might have fallen short in their goal of winning a playoff game, something the franchise hasn’t done since the Sam Wyche-Boomer Esiason days of January 1991.

Yet, in those recent seasons marked by playoff losses, the final image of the season was one of incompetence more than thuggishness. The Bengals were laughed at after various wild-card losses, but at least they were no longer the team buried by the simple yet searing word-picture:

The tiger stripes on the helmets might as well be prison bars.

Saturday night, against a Pittsburgh team they relish beating more than any other in the NFL, the Bengals decided to imprison themselves in the cold, dark cell of defeat with two idiotic acts.

The second act — which enabled Pittsburgh’s Chris Boswell to kick a very manageable 35-yard field goal for the win with 14 seconds left — could be legitimately debated. “Refs shouldn’t allow dead-ball squabbles to decide playoff games.” That’s a reasonable argument, but replays did show Adam “Pac-Man” Jones bumping a ref when he tried to lash out at Joey Porter, Pittsburgh instigator par excellence. Jones committed the great sin of putting oneself in position to get flagged. The penalty might not have been necessary, but Jones certainly made it possible, and for that alone, his actions were beyond dumb.

The tiger stripes are prison bars.

The personal-foul penalty which preceded Jones’s decisive 15-yarder put Pittsburgh in position to win the game, albeit with a 50-yard field goal instead of the 35-yard boot Jones subsequently created.

Vontaze Burfict — like Jones, a player whose history was replete with outrageous and unpardonably unsportsmanlike actions — thought nothing of delivering a high blow well after a play had ended:

The particularly appalling nature of these penalties — beyond all the immediately obvious details — is that Pittsburgh quarterback Ben Roethlisberger, hampered by a shoulder injury, could not throw a pass of more than 13 to 15 yards down the field. Roethlisberger completed a number of screens and quick-hitch passes on the Steelers’ final drive, but he never completed a pass which traveled more than seven to 10 yards in the air. Moreover, Big Ben didn’t complete a single pass on a play which began in Cincinnati territory.

The Burfict and Jones penalties covered the final 30 yards of the drive, hand-delivering a win to a team with a quarterback who was too hurt to throw the ball vertically.

The real shame of this game’s denouement is that it robbed the man above, backup-turned-starting quarterback A.J. McCarron, of a special moment in his young career.

McCarron looked every ounce the backup quarterback he was in the first three quarters. Cincinnati’s punchless offense fell behind, 15-0, and it was hard to see the Bengals scoring a single point at the time, hours after the Houston Texans endured the first home-team shutout of the day.

Yet, McCarron threw a deep ball to A.J. Green and got a pass interference call for it at the Pittsburgh 2. Suddenly, the Bengals were able to score in the opening minutes of the fourth quarter. At 15-7, they had a legitimate chance to pull off a comeback. With Roethlisberger having been knocked out before the Bengals’ first touchdown, the entire energy of the game changed.

Cincinnati’s defense feasted on a nervous Landry Jones, the Pittsburgh quarterback who failed to revive the Steelers’ offense in Big Ben’s absence. Marvin Lewis made a questionable decision to kick a field goal inside the six-minute mark when trailing by eight, but when his defense got a three-and-out and Pac-Man returned a punt over 20 yards into Steeler territory with under four minutes to go, the Bengals and their coach could see sweet victory. It was no longer the pipe dream it had been at the start of the fourth quarter.

When McCarron converted a fourth and two with a smooth completion for several yards into the seam, the Bengals’ odds of winning grew, but they still had to finish the job. When McCarron exploited a very tardy reaction by Pittsburgh’s safeties to hit Green on a 25-yard touchdown strike with 1:50 left, everything you thought you knew about the Bengals in January had changed.

Everything you thought you knew about A.J. McCarron, backup quarterback, had also been turned upside-down.

It was about to be a quarterback’s finest hour, and a coach’s moment of redemption. McCarron had already refuted his critics with that fourth quarter, but a victory lap was the only way for him to revel in his accomplishment. Lewis — 0-6 as Cincinnati’s head coach in the playoffs — was about to preside over a 15-point fourth-quarter comeback against a rival and nemesis, with a backup quarterback leading the way. So much about Lewis’s own career was going to be washed away with a victory…

… which is what makes the all-too-familiar implosions by two eternally reckless players that much harder to stomach.

(This doesn’t even touch on Jeremy Hill’s mind-blowing fumble when the Bengals tried to run out the clock following an interception of Landry Jones just after McCarron’s go-ahead touchdown pass. That Hill’s play is almost a footnote helps put the Bengals’ collapse in perspective.)

Lewis has tolerated Vontaze Burfict and Pac-Man Jones because of the plays they can make. Yet, a willingness to tolerate those kinds of players brings with it a responsibility to manage them, especially when a season rests precariously on the need for self-mastery.

Burfict and Jones lost their minds in that one fateful minute, and instead of celebrating his greatest night ever as an NFL coach, Lewis bears not only the sting of defeat, but the added weight of humiliation. He didn’t merely fall to 0-7 in the playoffs; he must now absorb the reality that he failed to control his players…

… the ones whose tiger stripes on the helmets might as well be prison bars.

These are the Cincinnati Bengals, unable to escape their darkest, longest shadows. One of the NFL’s most tortured franchises engaged in self-torture this time around.

Another good situation, another home-field playoff game, has been Bungled.