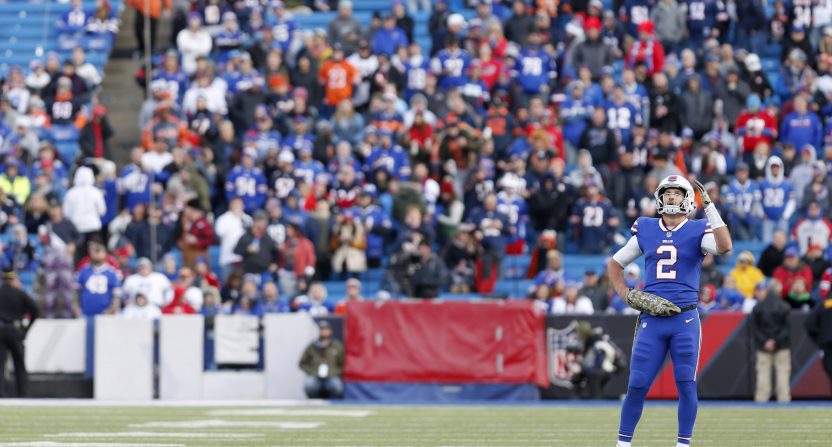 Buffalo, your long, regional nightmare is over. The Bills have released quarterback Nathan Peterman from his Western New York coil.

We should have known. As soon as Matt Barkley turned into Joe Montana this past Sunday against the Jets, the writing was on the wall. Mighty Nathan was no more.

The Peterman Era ends in Buffalo but it will never be forgotten. Drafted in the fifth round of the 2017 NFL Draft, Peterman was expected to compete for the backup gig alongside T. J. Yates and Cardale Jones. He seemed the prototypical young second-stringer that you just hoped you’d never have to use. He won that spot behind Tyrod Taylor, where he was expected to stay all season long. He made his first NFL appearance in a very on-brand way, subbing in during a 47–3 loss to the Saints. However, by Week 11, Taylor’s woes worked in Peterman’s favor and he assumed the mantle of starter.

In his first game as the starting quarterback for the Buffalo Bills, Peterman threw five interceptions in the first half. And a star was born.

When Taylor went down with an injury in Week 14, Peterman came back in. The Bills won, but Peterman had already left with a concussion by that point. The legend grew.

The Bills somehow made the playoffs in spite of their quarterback issues and had a decent chance against the Jacksonville Jaguars in the Divisional Round. Taylor once again went down with an injury and Peterman entered the game with a chance to become a Buffalo legend. He promptly threw an interception, sealing the victory for the Jags, and ending the Bills’ season. You couldn’t have drawn it up better.

Before the 2018 season, the Bills traded Taylor and drafted Josh Allen as their heir apparent. Even though he’s a rookie, it doesn’t bode entirely well that Allen was unable to unseat Peterman for the starting job (though the point could very well be that Peterman was simply a warm body meant to take up space). And take up space he did. In the first game of the season, he threw two interceptions and got benched in favor of Allen as the Bills lost 47-3 (A score that is henceforth as “The Peterman”). Since then, the Bills have been doing everything in their power to find a suitable warm body to keep the spot warm until Allen is ready (and uninjured).

Peterman did have one last gasp in the Bills’ game against the Texans a few weeks back. Peterman threw his only touchdown pass of the season to give Buffalo the lead. However, he then threw two interceptions, including a pick-six, to give away the game to Houston. He would play once more against the Chicago Bears on November 4 because of an injury to another quarterback, but that would be it for The Pete. The Bills signed Matt Barkley, who beat up the Jets, one of Buffalo’s favorite things in the world, and that was that.

Peterman’s legacy is unrivaled in Western New York. Both of his seasons rank in the top 10 for interception percentage among all NFL quarterbacks since 1990. He was 37-of-81 for 360 yards with three touchdowns, 12 interceptions, and a passer rating of 32.5. Truly a legend.

Of course, we all know how this is going to go. The New England Patriots are going to sign Peterman as their third-stringer. Tom Brady will pull a hammy and the backup with get injured, forcing Peterman into a playoff game for the mighty Pats. This time, however, he’ll throw for 350 yards, four touchdowns, and no interceptions as he leads the Bills’ rival into the Super Bowl. Then, in the offseason, he’ll parlay that into a fat contract with, I dunno, let’s say the Arizona Cardinals, where he will promptly shit the bed once more and get cut after nine games.