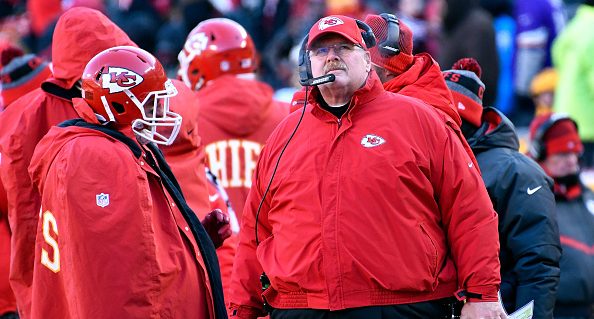 This Weekend in NFL Stupid highlights the dumbest decisions in football throughout the season. This week, we focus on one coach’s silly decision to apply a strategy that should have been abandoned years ago, which ultimately cost his team an important game.

Only 14 men in history have coached more NFL games than Andy Reid, so you’d think Reid would know better than to attempt to ice an opposing kicker before a field-goal attempt that appeared to be out of said kicker’s range. And yet on Sunday, with his Kansas City Chiefs leading the Tennessee Titans by one point, Reid called a timeout just before the snap as Tennessee’s Ryan Succop was about to attempt a 53-yard cold-weather field goal at the buzzer.

Succop’s nullified attempt came up short, but Reid’s timeout gave him another chance. In theory, the goal was to force him to think harder about the kick and become more nervous, but the reality is that rarely actually happens.

A 2011 study by Grantland’s Bill Barnwell found that kickers were actually more likely to make field goals after being iced than under regular circumstances. And the funny thing is, Reid’s nearly been burned by this strategy before. While coaching the Philadelphia Eagles in 2012, Reid called a last-second timeout before Lawrence Tynes attempted a potential game-winning field goal for the New York Giants. Tynes missed, but Reid’s timeout gave the Giants another shot. Fortunately for Reid, Tynes missed again after the timeout.

In this case, Reid wasn’t as lucky. See, 53-yard kicks in cold weather aren’t about nerves. They’re about sheer power. And Succop had little to lose. Few expected him to make from that distance. That’s why it might sometimes make sense to ice a kicker on a 30-yard attempt, but with a long-distance kick you’re just giving the kicker a dress rehearsal.

“I knew after that first kick that I just had to throw technique out the window,” Succop told Peter King of The MMQB. “I just had to kick that thing as hard as I could, regardless of the right technique. I was kicking a frozen football in the worst conditions you could imagine.”

Dude admitted that he learned from the first attempt, made adjustments that were only possible because the opposing coach granted him that opportunity, and then nailed the second attempt.

And for that, Andy Reid is the NFL’s idiot of the week.

Other stupid things from Week 15

** Everything about this play/throw from Joe Flacco

Guys, you’re up 10 points and inside your opponent’s red zone with six minutes remaining. That’s literally the only thing you can’t do.

** Reggie Nelson not getting down after making a game-sealing interception

Part of me wanted him to fumble in order to learn a valuable lesson.

** San Diego’s decision to give up

Right after that pick, the Oakland Raiders took over at the Chargers’ 14-yard line with 1:37 to play and immediately took a knee. But the Chargers actually had one timeout left. Had they called it right away, Oakland would have been forced to run two more plays. And had Oakland failed to pick up a first down on either play, the Raiders would have been forced to attempt a field goal with about 10 seconds remaining. Instead, San Diego never used its last timeout, allowing the Raiders to kneel down twice more to end the game.

Considering the number of blocked kicks and returns we’ve had this year, that’s unacceptable. You play until you’re completely out of chances, and San Diego still had a chance to make a big play on defense or special teams in order to win the game. But for whatever reason, Mike McCoy conceded.

A little background for ya, Jer.

Jeremy Hill disrespected the Terrible Towel … and then the Bengals fell apart. pic.twitter.com/pfqAYvOJz9

Gotta love that Hill and the Bengals tanked after that despicable display.