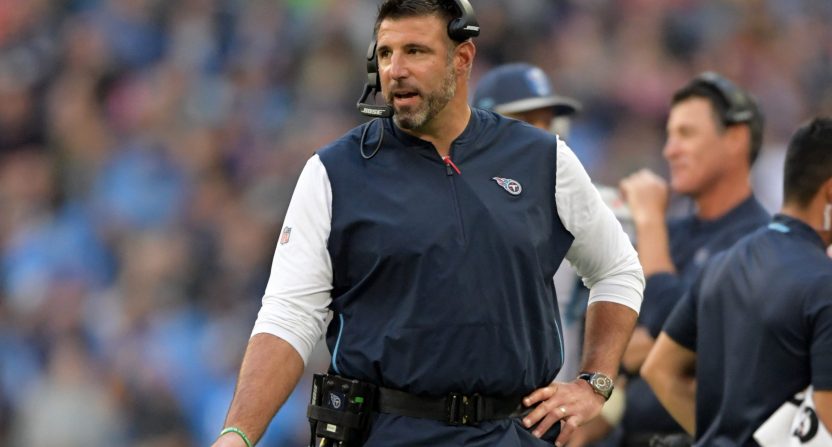 This Weekend in NFL Stupid highlights the dumbest moments and decisions in football throughout the season. Coming out of Week 7, we’re focusing on a Tennessee Titans team that must have been victimized by jetlag in London.

With only two timeouts in his back pocket in the fourth quarter of a one-score game, Mike Vrabel blindly challenged a clear-cut Keenan Allen catch. The challenge appeared to come before any helpful replays had been shown, indicating Vrabel was gambling that Allen didn’t make the third-down reception. He did, and the call was quickly upheld, leaving the Titans with just one timeout for crunch time.

Down by a point following a touchdown in the final minute, Vrabel boldly opted to go for two. The problem wasn’t the “gamble,” because I’ve got no issue with an underdog going for two (close to a 50/50 shot) rather than attempting an extra point and hoping for a win in overtime (also just shy of a 50/50 shot). The problem was the approach Tennessee took offensively.

First, they had Marcus Mariota in the shotgun. They made the same mistake on fourth down just prior to this but were bailed out by a Chargers timeout. After thinking it over, Mariota was under center with three players in the backfield and the Titans scored.

On original two-point conversion, Mariota lined up eight yards from the end zone. By the time he dropped back and scrambled, he was trying to make a play from at least 13 yards out… 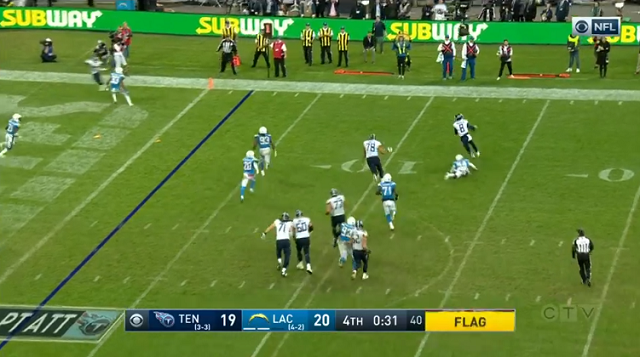 The play didn’t pan out, but the Titans were bailed out by a defensive penalty.

Problem is, they hardly learned from their mistake. This time, on the one-yard line, Mariota was under center with AN EMPTY BACKFIELD, making it real easy for the Chargers to defend by process of elimination. The result was a well-defended incomplete pass, and the Titans lost by a point.

Mariota should be running the ball there, or he should at least have the option to on a roll-out play.

Also, look at how open that fullback was, Marcus!

The Cowboys once again became way too conservative once they hit field-goal range trailing by three, and played for overtime while settling for a longer-than-ideal field-goal attempt. This was the result…

Cowboys Center gets a 5 yard penalty to push Dallas back to a 52 yard Field Goal attempt to sent it to OT….. Ball nails the right upright 😬

Of course, without that silly “snap infraction” penalty, that kick still would have been good…

Just looked back at the snap infraction that cost the Cowboys five yards before the missed FG. Long-snapper L.P. Ladouceur looked like he moved the ball into snapping position, but no quick movement stood out. Interested to hear the explanation.

This was actually one of the least stupid weeks we’ve experienced since starting this weekly column five years ago. But that probably means next week will be extra dumb, so stay tuned.