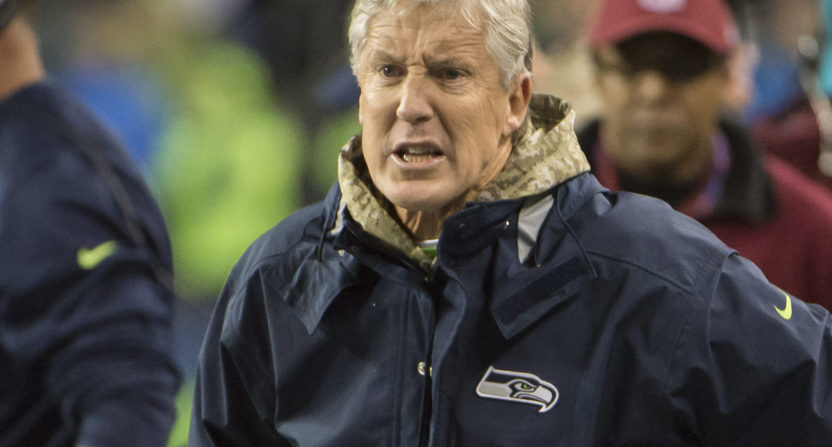 This Weekend in NFL Stupid highlights the dumbest moments and decisions in football throughout the season. And in Week 15, we start with several plays that have been generated plenty of buzz over the last 36 hours.

The NFL’s two most ridiculous rules

If anyone tries to say that Jesse James caught the ball, link them this tweet. The NFL’s SVP of Officiating explaining how the call was correct: pic.twitter.com/jtYn5rcgiy

Oh no Derek Carr, what is you doing? pic.twitter.com/uUnbdQZX93

Look, that catch by Jesse James was not a reception. The officials got it right. And that fumble by Derek Carr was rightly ruled a touchback. The rules were applied properly in both situations, but both served as reminders yet again that the rules aren’t fair.

My money is on the NFL changing the latter rule in the very near future, since it has been a factor so many times this year and since it is so easy to fix. The offense should, of course, retain the ball if the fumble isn’t recovered, but they should be penalized 10 or 15 yards. That’s a happy medium, because it wouldn’t be right to let them keep it at the spot of the fumble, but it also isn’t right to take possession away from them.

The catch rule is trickier, but I think the key is the standard for completing a catch when going to the ground is simply too high. If the ball is fully possessed without any movement for a split-second by the receiver, it should be a catch. Anything beyond that is a fumble. That would increase offense, seem a lot more fair and make for some damn exciting plays when fumbles replace incomplete passes.

About that folded index card

Spotting the football is a comically inexact science. Thus, measuring a spot to the nearest millimeter with a folded piece of paper is problematic. A fine-tooth comb shouldn’t be used to double-check an estimate.

And the play that followed the James non-catch in Pittsburgh

Here is the fake spike and then the interception thrown by Ben Roethlisberger. #NEvsPIT pic.twitter.com/1Pe3tWJ3i7

Ben Roethlisberger’s original plan was to spike the ball, but it was third down so that would have virtually guaranteed that the Steelers would have been forced to settle for overtime. Against a team like the Patriots, I can appreciate why the coaching staff decided to try to win the game right then and there by running one final pass to the end zone with about 10 seconds remaining.

The problem is that the offense wasn’t ready. The play call took them all by surprise, and Eli Rogers was the only player who ran a route. Dudes were just standing around.

Mike Tomlin should have had his players prepared to run a quick play if indeed the clock continued to run after the second-down play, which it did. But he didn’t and the result was a disastrous, game-clinching interception in the end zone.

What the hell was Pete Carroll thinking?

Your franchise quarterback, Russell Wilson, has been assaulted all season, sacked all afternoon. You’re trailing by 35 points with just five minutes remaining. Your opponent has sat all of its starters down. And for some crazy-ass reason, Wilson remains in the game.