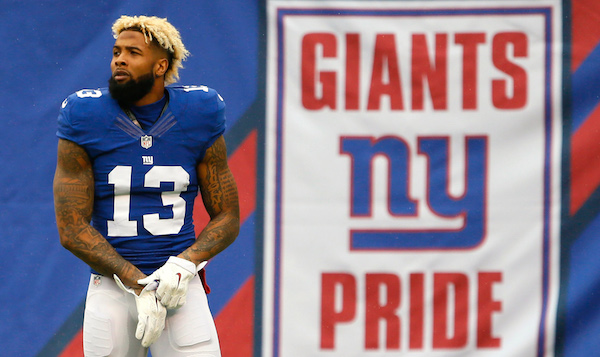 Not since Randy Moss graced the league with his presence in the early 2000s has the NFL featured a young wide receiver as talented as Odell Beckham.

Other than Moss, no other receiver put up the kind of numbers Beckham did during his first three seasons in the league. Compared to any other wide receiver’s first three years in the NFL, the New York Giants’ pass-catcher ranks first in receptions (288), second in receiving yards (4,122), and fourth in receiving touchdowns (35).

Beckham’s existence on their roster has arguably been the sole reason for the Giants experiencing any sort of success since he entered the league in 2014.

New York is 21-26 with the receiver on the field during the last four seasons. Without Beckham in the lineup, the Giants are just 5-12 since 2014.

Some could argue that New York wasn’t that much better with the receiver on the field, but they likely would have been just plain garbage without him. Looking for proof? Go and take a look at last season when Beckham appeared in just four games and the Giants only managed to finish with a total of three wins.

Recently, the slow period of the NFL offseason has lead to some speculating that New York could possibly consider trading Beckham this year.

If this is true and the Giants are seriously looking into sending their team’s best player elsewhere, it could be a move that could set back the franchise for years.

Beckham is not the type of player that is easily replaceable. He’s not a Brandon Marshall, or an Anquan Boldin, or a DeSean Jackson. Like it or not, Beckham is a once in a generation type of receiver.

Would the Pittsburgh Steelers trade Antonio Brown? Of course not. Brown and Beckham are very comparable in terms of skill-set and production, so why would trading the young New York receiver even be a consideration?

The Giants struck gold when they drafted Beckham in 2014 and they should be doing everything in their power to keep him around for as long as possible.

Take it from the Minnesota Vikings, who thought it would be fine to trade Moss to the Oakland Raiders in 2005 and replace him in the 2005 draft with South Carolina’s Troy Williamson.

In the first three years after Moss’ departure, the Vikings failed to win more than nine games in a single season and never qualified for the playoffs. During that same time period, Williamson caught a grand total of three touchdowns and never finished a season with more than 455 receiving yards.

In seven years with Minnesota from 1998 to 2004, Moss ended a season with at least 1,000 receiving yards six times. Since the Vikings traded him in 2005, only two of their players (Sidney Rice in 2009 and Adam Thielen in 2017) have accomplished this feat.

Instead of figuring out other ways to improve their team (like fixing a 26th-ranked defense in 2004), Minnesota took the easy way out by sending Moss packing and the results were not ideal.

It sounds like New York could possibly be considering a similar move with Beckham this year. If so, it would be a move that would likely end with an outcome parallel to what the Vikings experienced after trading Moss.