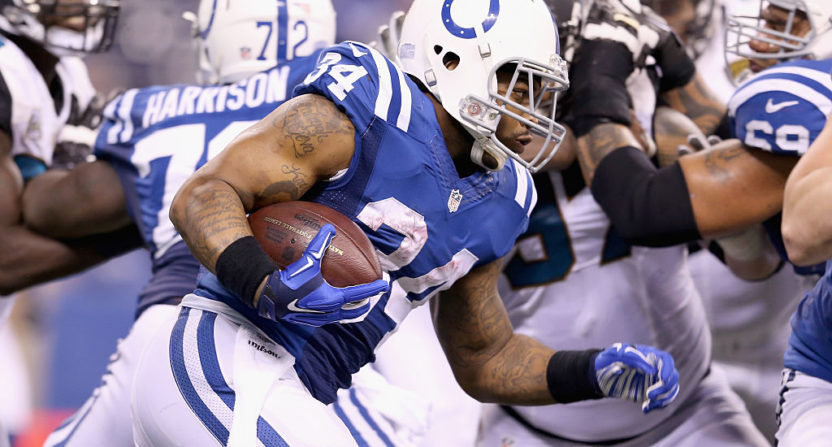 There was a time when Trent Richardson was considered the heir apparent to Adrian Peterson as the NFL’s top running back. Those days are long gone, but the NFL washout is looking for a bit of reputation redemption up north.

Richardson, who finished third in Heisman Trophy voting in 2011 and was selected third overall by the Cleveland Browns in 2012, reportedly finalized an agreement to play next season for the Saskatchewan Roughriders of the CFL early on Tuesday.

However, just hours after the initial report surfaced, a second report was published by AL.com, stating that Richardson would *not* in fact be signing with the Roughriders because of a disagreement about the contract he would have to accept.

The reason, Richardson said, is because he would have had to sign a one-year contract with a team option for a second year, so he would have essentially been locked into playing two years in Canada if he did well.

Considered the best running back available in the 2012 NFL Draft, Richardson’s rookie season started with an injury but ended with 950 yards and 12 touchdowns. He would play in only two games for the Browns in 2013 before he was traded to the Indianapolis Colts where he would spend the next two years fighting for carries in a crowded backfield. He would sign preseason contracts with the Raiders in 2015 and Ravens in 2016 but didn’t make it to opening day in either season.

When no NFL teams came calling this time around, Richardson had his agent shop his availability around the CFL for interest. That seemed to have paid off with an apparent contract deal and chance at some level of redemption, but with Richardson pulling out, who knows if he’ll end up getting another shot at playing professional football anywhere.

Richardson would have been in quite the battle for the starting job in Regina, as the Riders backfield already includes Arizona State’s Cameron Marshall and Christion Jones, who played alongside Trent at Alabama. Canadian running backs Greg Morris and Kienan LaFrance are also fighting for playing time.

The Roughriders tied for the worst record in the CFL last season (5-13), so it seems like this would have been a perfect roll of the dice for both parties with the hopes that they can both benefit. But alas, Richardson’s agent’s apparent ignorance of CFL contracts meant the signing was not meant to be.