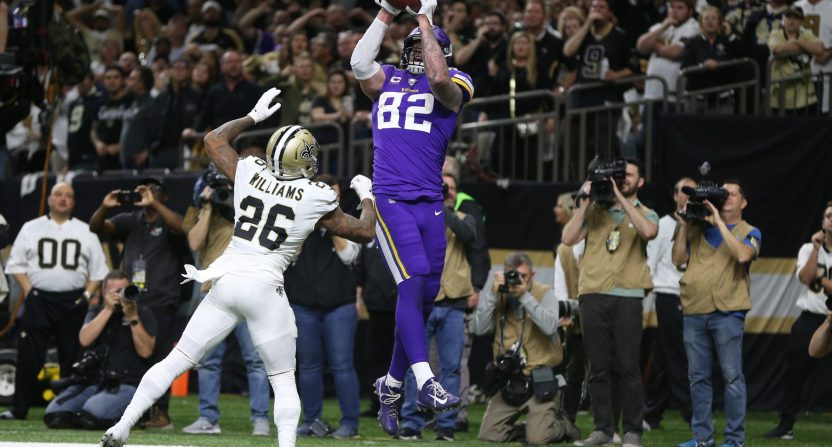 When the Minnesota Vikings and New Orleans Saints meet in the NFL playoffs, you can be sure of one thing. The loser is going to walk away from the game pissed off over a no-call that they feel played a role in their loss.

In 2009, Brett Favre and the Vikings seemed destined for the Super Bowl but a controversial no-call in overtime helped the Saints win that game, eventually taking them to a Super Bowl. Two seasons ago, we saw The Minneapolis Miracle happen. Last season’s Saints no-call was against the Rams, not the Vikings, but it was a reminder that this is now something that follows the franchise wherever they go in the playoffs.

This year’s Vikes-Saints contest was already an angry one, with squabbles on both sidelines, helmet tosses by disgruntled wide receivers, and middle fingers from frustrated fans. But that was all before we got to overtime.

The Saints had pulled off a fourth-quarter comeback to get us here but it was the Vikings who got the ball first. With that, Kirk Cousins did was throw the best pass of his entire life to get Minnesota all the way down to the two-yard-line.

Cousins goes deep to Thielen for a gain of 43 yards! #Skol #NFLPlayoffs

Two plays later, Cousins lofted the ball into the back corner of the endzone where Kyle Rudolph hauled it in for the game-winning score.

New Orleans gotta be tired of this Minnesota heartbreak. pic.twitter.com/ktOsauGcps

Game over. But if you look closely at the battle between Rudolph and K.J. Williams, you can see the Minnesota receiver extend his arm to create some space in order to make the game-winning catch. You could definitely make a case that offensive pass interference was possible and, at the very least, the play should have been reviewed.

I'm dying. This is so blatantly OPI and it didn't get reviewed😂😂😂😂😂😂 pic.twitter.com/1PfPdeU69p

In fact, even former NFL official Terry McAulay said so.

It is illegal for an offensive player to extend his arm or arms and create clear separation from the defender. That was OPI. #MINvsNO

No flag was thrown and there was no official review other than whatever was seen in the booth. Technically, every play is reviewed in the booth during overtime, but they chose not to reaffirm the outcome with the refs on the field.

Of course, you could also make the case that these kinds of moves are happening all the time and it would have been overkill for refs to call it on a critical, game-winning touchdown pass. However, given the way Saints fans have had to get used to no-calls in critical moments recently, you have to wonder if the referees just didn’t want to add fuel to that fire.

Enjoy complaining about this all offseason long, Saints fans. 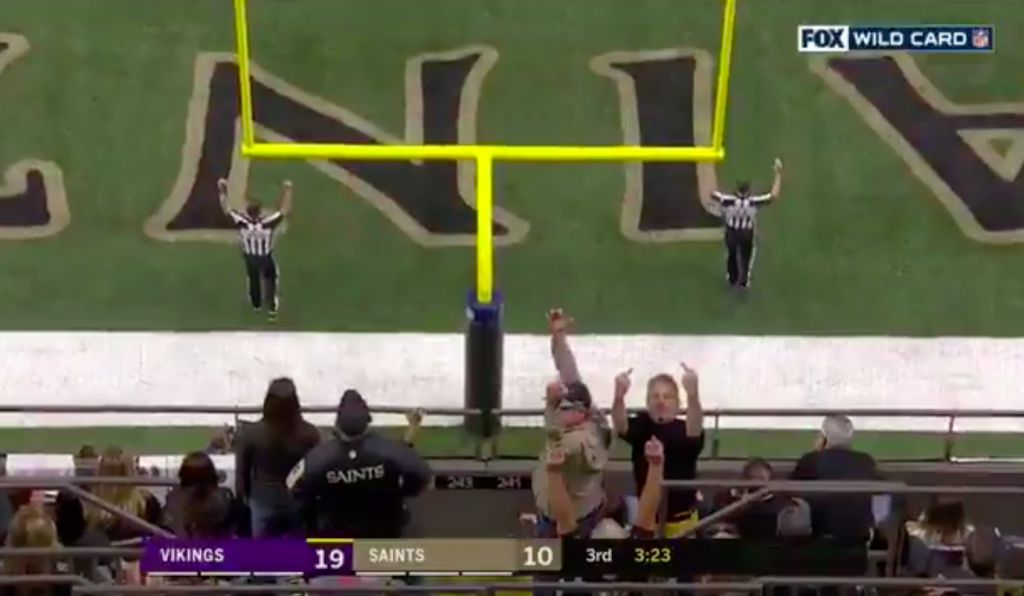